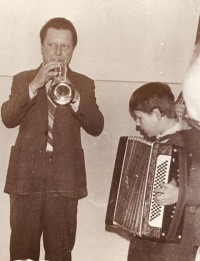 Mirek with his father

After leaving music school, Mirek moved from Lublin to Poland's capital Warsaw which gave him the opportunity to work as a fledgling professional musician with some well-known Polish artists like singer Natalia Kukulska, Halina Frackowiak and Maryla Rodowicz. "I basically became a self-sufficient music producer and I produced music for labels like Polygram Polska and EMI alongside my friend Jarek Pruszkowski from the band Cana. Jarek managed to get a job as a sound engineer in Warsaw and he was a pioneer. It was very difficult to get into the music business - especially as a Christian - but we had access to professional studios which was amazing. I learnt a lot from Jarek - a genius musician - and he's probably the person, apart from my dad and my family, who kept me going musically at that time the most.

"About that time, Jarek decided to start a mainstream band called Sixteen. I was part of the group when we were chosen to represent Poland at the Eurovision Song Contest in Birmingham in 1998. I have to be honest - I think the song 'To Takie Proste' was good but we had far better songs that had been already published but couldn't use because of the contest rules. We achieved 17th place out of 25 and, considering all the politics that go on, I think it was a good result. I never thought we would win it but, for me, it was more about being involved, learning as much I could and getting a chance to meet a lot of other artists. It was a great learning experience. We were already one of the top bands in Poland but the Eurovision Song Contest helped us to get further than we had before."

After the buzz of performing their music in front of millions of viewers on one of the biggest musical stages in the world, tragedy hit Sixteen with the sudden death of its founder member and guitarist Jarek. "That was a big loss and it was heart-breaking to lose such a close friend," recalls Mirek. "We cancelled all our gigs and the band came to an end. After Jarek died, it became clear that I had to go on without my mentor and use the knowledge I gained from him and press forward. It's not so good when you are too dependent on a person and you are constantly asking questions if that goes on too long. You need to be kicked out of the nest and that's what happened to me."

Despite the relative success of his musical career in Poland, Mirek and his family made the decision to move over to Scotland in 2007. "My family needed a change and some of our friends from our church in Warsaw had moved over," he explains. "Even though I was doing a lot of music in Poland, I made a few mistakes along the way. Being a Christian in the music business is not easy unless you don't care about your values and just do everything that comes along. I've learnt along the way that I need to carefully think about the message behind the music. I don't mind working with anybody - they don't have to be Christians - but there is that line that I won't cross. That's probably one of the prices you pay because you can lose work. Back then I disconnected myself from the music business because I was a Christian and perhaps went to the other extreme. Do I regret it? No I don't because every single thing you do in your life is a learning opportunity and that opens doors to other paths. We don't always know what the negative consequences might be if we were to make the alternative choice. Sometimes, we have to make a decision not knowing if it's a good or a bad one but I think that God sees everything from a different perspective."

After his family's relocation to Scotland, Mirek didn't immediately throw himself into music and instead took a job as a packer at a nearby food company whilst taking a course to improve his English. All of this proved challenging, as Mirek confirms: "Imagine yourself in Poland, you might be part of the biggest band but no one in another country will know who you are. All the achievements and medals had gone and I was asking myself many times if I had made the right choice to move away from Poland. It even affected my personal relationship with God because I was no longer able to rely on my achievements - I had to trust him. I have learned so much from this."

Before too long, Mirek began looking for music work and placed an advert on the free ads site Gumtree to advertise his services. "A drummer called Carl Taylor responded and offered me a space in a wedding band," he recalls. "We met and he introduced me to other musicians and one of them was Simon Kennedy. Carl played in a blues band called Red State at the time and he invited me to sit in on one of their rehearsals and that's where I met Simon. We played some pubs gigs here and there and that's how my relationship with Simon came about. I quickly found out that he was a Christian which was a really important thing for me. Some people weren't so nice to me when I came over to Scotland so I was desperately looking for other Christians. My friendship with Simon became very strong and still is to this day. I remember when I was going through some difficult times - being an immigrant in a different place - and he prayed for me after one of the rehearsals. It was a simple prayer and it's something I'll never forget and I count him as an incredible friend."

Following the disbanding of Red State, Simon and Mirek went about setting up the Simon Kennedy Band in 2014 with the line-up changing several times on the way to become the trio of virtuoso instrumentalists the group is now. "I still enjoy being part of the Simon Kennedy Band and recently we've been mainly focussing on the recording of our second album 'All Or Nothing'," confirms Mirek. "At the moment, we're looking at possibilities of playing in Poland which would be good. I'm still in touch with many musicians in Poland and I occasionally meet up with them when I go back."

Anyone who has seen Mirek on stage with the Simon Kennedy Band will know that there is an infectious air of joy about his approach to music - something that is present even in the impromptu performance he gives on his front room piano after our interview is finished - and I ask him why he seems so happy when he's playing. "I will tell you why I smile when I play music," he says leaning forward as if to impart some great secret. "I have this passion for music and that goes back to my dad who spent time with me. Ultimately, it all comes from God - all the talents and the desire to do stuff comes from him. In his plan, he gave me a dad who was a musician who was passionate about music as well. I want to share this passion with the students in the schools that I teach. I want to share it in concerts. I just want to express myself through my music. I strongly believe that music is not just another job to do but it's something that can influence people. Me being a Christian, I think that music plays a very important role in getting the message of God's love across.

"I just want to use my music as much as I can to comfort and heal people - to bring joy and hope," he adds in closing - something he has most certainly achieved through his involvement with Tylko Jezus.

what a great story,and a brilliant musician