Miss Angie: The American singer with a attention-grabbing debut

Having exploded onto the CCM scene with her searing debut album '100 Million Eyeballs' MISS ANGIE has gotten herself married. Mike Rimmer reports. 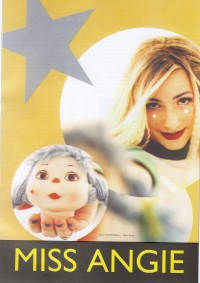 Miss Angie has packed a lot in since she catapulted onto the US Christian rock scene six months ago. Her debut album '100 Million Eyeballs' has caught the ear of DJs in the US and the UK, she has formed a band and has toured with Guardian and Sixpence and she recently eloped with her boyfriend! (Wonder whether there will be a name change on the next album?) Her hippie, dippie chick image is something fresh in Christian music while the album's title tune caught a lot of attention. Anybody who calls an album '100 Million Eyeballs' has to be worth investigating!

On the phone, Miss Angie initially sounds a little shy as she greets me with a coy "Hello, Hi." So where did Angie Turner start when it comes to making music? "As a kid I was not as musical as I am now," she confesses. "I would sing to myself in the mirror and turn the music on and dance round wanting to be a rock star. I didn't sing really good then. I started playing the piano when I was younger and when I was about 16 I started playing a lot of piano and singing because I was playing a lot of praise and worship at churches and that's kind of when I started singing a lot and I got better then."

She isn't the only one from her family who makes Christian music. Miss Angie explains. "My brother plays guitar in a band called Johnny Q Public. I was always singing so loud in the car wherever we would go and I really didn't have a good voice back then. My parents were in the music group at church so I grew up hearing a lot of praise and worship music so when I started playing the piano. I was singing songs to God and after I gave my life to God, I sang songs about the testimony of that. I was wanting to write songs so that people could hear how God changed my life. I started going to youth groups and different places to sing so that's how it all began."

Miss Angie was 16 when she got serious about God. "I think I got God crammed down my throat," she remembers, "and it went over my head when I was a little kid because I heard so much about it but then I started having a desire to have something of my own. A desire to know who was God and who was I going to serve as myself, Angie, and not just my parents and everyone else around me. I started reading the Bible on my own. I would come home from school and just read forever trying to study God and who he said he was for myself. That's when I got serious because the Bible scared me when I first read it because I didn't pay attention to it for so long and then when I read it, it was like, 'Oh wow! This is real and it's going to happen.' I knew that Jesus was going to come back for those who were his and I didn't feel like his at the time."

Angie's experience growing up in church but reaching out to discover a faith of her own gives her a unique slant to minister to other teenagers in the same position. "I meet lots of them," she acknowledges. "It really bothers me too because when I go to a church and there are lots of kids running around and they don't really know God it really hurts me sometimes that they would be there in the church and take it for granted. They get to be there and be fed and not really know him because there are other places in the world where you can't take your Bible out because you'll be put in jail."

The recording of the album wasn't an easy time and Angie engaged in some interesting stress relieving activities! "I took a bunch of my stuffed animals into the vocal room, like 10 of them, because I wanted it to be real homely. That was fun for me because I would throw them if I got mad and beat them up really bad." She laughs and continues, "We recorded in Nashville. I worked with my family. My brother and boyfriend co-produced the record. Working with your brother, you're allowed to scream at them. It's been so long, it's hard to remember. I just try to forget because it was so stressful trying to make a record and going over every little thing. It takes so long just to do one line! The band played the songs over and over again because we wanted to have a live track cut. We recorded drums, guitars and bass all live and then I went back and sang over it."

How did she deal with stress? "I don't know how I dealt with it because I still look back and think it was really rough. I would take time away from the studio and be by myself and spend time with God or go shopping!"

We talk about some of the songs and I ask Angie to tell me something about "Trampoline". She explains that the song is "special for me because it's not really got any big answers to the questions I'm asking. It's something everybody can relate to. I know that after I was saved I wanted to please God so much and you realise as time goes on that you're not perfect and you do sin. It really broke my heart. I thought maybe when I got to be saved that I'd never sing again and that's what I determined and then you fall and mess up and you feel like everything is over. It's kind of like your heart and spirit like Paul says, it longs to do the things you want to do but you find yourself not doing those things. Your spirit longs to be perfect with God in Heaven like he's created it to be in the long run, but we're here in this body with this sinful nature and we're striving for that and it's just like a trampoline."

'100 Million Eyeballs' is a weird title for the album but also a great song. I ask Angie to tell me about it. "I like to keep people guessing. It's just the name of the song and an exaggerated phrase to describe the creatures I am singing about. They had eyeballs all over their body! It was the last song I wrote and I did it in 30 minutes! I was inspired by Bjork and her song 'I Miss You'. I was reading in Revelation and I thought this is so weird. I have got to write a song about these creatures that God made because it's too weird. People need to remember how weird God is and they need to hear how different he is from us so I used this song. It creates an interest in what else there is in the Bible so it opens up a door to show the other true things in the Bible."

In support of the debut album. Miss Angie has put together a band and toured for most of last autumn. She reports, "We were on the road with Guardian and that's been a lot of fun because the crowds are pretty loud. We also went on the road with Sixpence None The Richer and they have a girl singer and I was really glad to be around another girl." So did it become a little blokey? "I get tired of all the boys," she laughs.

One of the first songs on the album to catch my attention was "Only With You". Angie tells me, "It is just a love song about God of course. I wrote it so fast. I sat down at the piano and I started singing it and playing it and all the words just came out like that! It's great in concert. We love playing it because it's so moving."

I wonder whether Angie sees her music more as praise music rather than CCM? She thinks for a second and replies. "I see it as rock'n'roll which lifts Jesus up and tells about him which is praise music. I am just trying to praise Jesus in my songs and in my life. I believe that when he is lifted up he will draw people to himself. When God's people praise him, he is there like the Bible says, to do whatever we need in our lives. I'm just trying to lift him up."
So is this t
he future style of worship for the Church? Surprisingly Angie says, "I don't think so. I think we'll have to wait until Heaven." So does she think there will be a corner in Heaven that plays quirky music? Angie replies. "God is too different, he won't have the same cookie cutter stuff going on." As for me, I look forward to meeting her in that corner when it comes to passing eternity worshipping God!