Moby: The "follower of Christ" making waves in the mainstream

He's sold mucho records, been called the 'Iggy Pop of techno' while his appearance at 1995's Greenbelt Festival raised eyebrows from conservative evangelicalism. Liz Liew spoke at length to MOBY, before his gig opening for the Red Hot Chili Peppers at Brixton, about his music and beliefs. 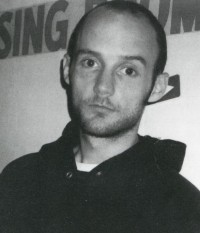 The mainstream music press have always portrayed Moby as something of an enigma: a totally drug and alcohol free techno wizard, a Christian who loves hardcore sex, a peace activist with somewhat violent stage antics.

Yet the truth is he confounds all expectations and preconceptions. Granted, he may be a dance floor hero of the techno scene but, in the light of his current release "Everything Is Wrong", his eclectic musical style also encompasses elements of speed metal, euphoric pop, jungle, acid house and ragga. His recent tour supporting the Peppers displays yet another facet to his remarkable musical proficiency in his rock/metal-orientated set.

Moby's professed Christian faith has received contempt from the mainstream press. He has however somehow managed to retain his credibility due to his unorthodox approach to Christianity - and also his libertarian views on sex. Far from being a Bible-basher Moby prefers to be labelled a 'follower of Christ', viewing his faith as a personal thing between himself and God.

Born Richard Melville Hall, Moby (a nickname he acquired from childhood) learnt classical guitar at the age of 10 and then basic jazz theory. In his teens he played with speed metal band Vatican Commodoes, hardcore outfit Flipper and art-rockers Ultra Vivid Scene. In the mid-80s Moby developed an interest in DJing, having dropped out of university, which in turn sparked an interest in dance music. His Twin Peaks rush of "Go" propelled him into the limelight in 1991, reaching number 10 in the singles charts. He has since been dubbed the 'Iggy Pop of techno' (Melody Maker), 'the first techno star' (i-D magazine) as well as 'doing for techno what Prince did for funk' (Spin magazine).

Moby's current release 'Everything Is Wrong' is the first album he can be proud of, following his arduous legal battle with his previous record label Instinct, during which time they released his first three albums without his consent. The inlay of "Everything Is Wrong" includes two essays written by him detailing Man's environmental and moral irresponsibility, with glaring statistics: and one ton of toxic waste is produced by the US military every minute".

As well as being a passionate environmentalist, animal rights activist and strict vegan, Moby has also acquired a reputation as one of the most imaginative mix-masters in the business, remixing tracks for Brian Eno, Michael Jackson, Pet Shop Boys and Depeche Mode amongst others.

I spoke to the man himself in his humble dressing room at Brixton Academy.

Would you say that you were a committed Christian?

"To be honest, I'm wary of the word 'Christian'. I love Christ but the word 'Christian' implies cultural Christianity... There are a lot of people who call themselves cultural Christians whom I love and admire. But especially living in the States, there are a lot of elements of cultural Christianity that I think are distinctly un-Christ-like, which I am really sceptical about... I was brought up in a Presbyterian church and up until the age of 20 I didn't even know who Christ was. We went to church at Christmas and at Easter, but to me it was just a cultural institution. It was about businessmen and their wives, being bored for an hour and a half and doing 'penance'. So that's the side of Christian culture that is the sort of ineffective placating of capitalist culture. Then there's the really hateful side which is the evangelical Southern conservative Christian culture. It's very hateful, very judgmental and I really don't understand it. There's an organization in the States called the Christian Coalition I think, headed by Pat Robertson and Ralph Reid. They're all for promoting school prayer, bombing abortion clinics and saying that AIDS is God's punishment for homosexuality. Christ specifically preached non-judgmentalism to such an extreme point. He said, 'Do not judge other people. It's not your place to judge.' I don't understand where Christians get off judging other people, saying that homosexuality is a sin, saying that if you're gay you're going to hell, saying if you're not baptised you're going to hell. To me that doesn't embody the Spirit of Christ. The letter of the law is not as important as the Spirit of the law, the Spirit of the law being compassion, love and humility. So I love Christ and I believe that Christ is/was God but I'm wary of the word 'Christian' because, especially in the States, it is associated with all those bad elements."

So would you say that you are more a 'follower of Christ'?

"Yeah, pretty much so! I love Christ and I think that his teachings and understandings of the human condition are perfect and completely spot on."

How did you become a 'follower of Christ'?

"I grew up going to church and had my pre-conceived notions of who Christ was. Actually I had always thought of Christ as being a Santa Claus figure or someone who would always let you do whatever you wanted (so long as you were) nice to people. Then a friend of mine who was a youth minister got me to read the New Testament, specifically Matthew. (Before then) I had no idea who Christ was, even though I thought I did. So I read Matthew and that was it! After the first three or four chapters I then realised that it was the most powerful thing I had ever encountered. I was totally sold on it!"

Has your faith affected your music at all? Have you drawn from it lyrical inspiration?

you are not alone moby on christianity. similiar to what you call cultural and southern (mean) christians, i agree whole heartedly. a step further, i figured out that the bible is a group of documentaries of men who got to meet Jesus and their thoughts on what he said and meant. it is all written by man and not a religious book. my favorite book for my way of christianity is called The Urantia Book and i want everyone to know about it who are seekers of truth. ~respect and bless

For more on Moby visit the Moby artist profile