Mosaic MSC: Streaming success for the worshippers but not the critics' favourites 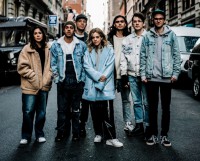 Mosaic MSC is very much a modern worship phenomenon. The group of musicians bearing that name emanate from the Mosaic Church. The church originally formed as the Bethel Baptist Church in 1943 and is now a multi-site fellowship based in Los Angeles, California. With approximately 60 nationalities in attendance, the church is currently led by lead pastor Erwin McManus. In January 2012, Mosaic started holding its worship services in Hollywood.

The success of Mosaic MSC has been nothing short of phenomenal. Their song "Eyes On You" currently has more than one million streams on Spotify, and the group has a massive worldwide following.

With more than 95 million streams and over one million monthly listeners in more than 65 countries, Mosaic MSC, the collective of some of Los Angeles' most talented and culturally diverse singers, continues to impact millions through their unique way of painting the musical soundscape of the current culture with their signature atmospheric, pop/rock energy and live performances across the globe.

Mosaic MSC scored their biggest Billboard hit to date in March 2018 with the soulful anthem "Tremble" from their 2016 live album 'Glory & Wonder'. Read a press release, "The track, an unabashed expression of the power of new life and inner peace, spent 33 weeks on the Hot Christian Songs chart and peaked in the Top 20, while 'Glory & Wonder' reached the Top 20 on the Billboard Christian Albums chart. Mosaic MSC's original videos, cover songs and lyric videos have seen an astounding 13 million cumulative views on YouTube."

The worship pastor at Mosaic MSC is Mariah McManus, Erwin's daughter. She spoke to Worship Musician magazine about her beginnings at the Mosaic church. "I've been volunteering for 11 years and I've been on staff for five years. At the beginning, we met every Sunday at a nightclub called The Mayan in downtown Los Angeles. It's the number one salsa nightclub in the country. So, when I started singing at Mosaic, I was 15 years old in a nightclub! It's really a fun story, but kinda crazy at the same time! For our church, we've never owned a building, at least we haven't in 15 years. So we went from nightclub to nightclub and that's what I grew up doing. We're now in Hollywood. It's definitely been a journey, but that's where I started. . . a teenager singing in a nightclub."

Having a wealthy pastor behind her definitely had advantages for Mariah. "My dad bought my brother and I every instrument one Christmas just to see if we could learn, and he made it a little competition because my brother and I are really competitive. So I grew up playing the drums and the piano and guitar."

Mariah went on to explain how things changed for her and the church. "When we were at The Mayan, we didn't focus as much on worship because our church, even still to this day. . . one thing that hasn't changed is the majority of our people don't know Jesus. So, what we did was we put this focus on arts in general. There was music, but there was not as much as you would hear today at our church. There were a lot of other elements of worship that we used. It really worked for what we were doing in the environment of being in a nightclub and being 'not ordinary' and kind of changing the game a little bit. Over the last few years, we have focused on kind of just stripping that back and what it looks like having a strong worship community and write music. Five years ago, when I stepped into worship, there was like seven-eight people on the team and they played every week. I was a volunteer for most of my time at Mosaic and so I just kind of went with the flow and tried to do whatever I could. But when the worship pastor stepped down and I stepped in, it was a big shift in culture and I wanted to bring us into a real community of worship and make our church value worship and singing as a whole more than we did before. My dad has a huge heart for that, and that obviously comes from his vision and him wanting that. . . for us to write our own music - he's always wanted that. When he started Mosaic, he was the worship pastor and the preacher. So, he would just put the guitar down and be all sweaty and start to preach! This has always been something that's been on his heart. So, it was really cool to be able to know that and step into that - kind of take his vision and try to implement it.

"So, we had under 10 people on the team and now we have like 60-70 people on the team. It's created a really cool wave of worship. In Los Angeles, we obviously have a lot of really young people, and a lot of these people are not just young in age, they are also young in their faith. They came to Jesus at Mosaic. It's been really cool to be able to teach them and show them and create a culture in the church of worship and what that means right off the bat. A lot of times, that creates a really cool energy of people that are so passionate and on fire because they've just found this relationship with Jesus. It's a totally different dynamic than with a 'normal' worship team, but it's really special for us and we've seen some amazing growth. In the last three years we've started writing songs, and it's all been just because of the narrative and the life that we all have at Mosaic. Now we have tons of songs and tons of writers. It's been really cool over the last few years to see how God has blessed that."

The release of Mosaic MSC's full-length album 'Glory & Wonder' in 2016 and the mini-album 'Heaven' in 2018 have brought forth mixed reviews from the critics. About 'Glory & Wonder' Cross Rhythms radio chose three songs for its Verticality worship program, "Glory & Wonder", "Never Stop" and "How Beautiful", while the CR reviewer observed, "There are musical inflections at every turn with synth-driven melodies and brooding rhythms in the intensity of a live setting" and Timothy Yap, writing on the Hallels website, complained, "The lyrics of the songs are far too colloquial. Many of the songs are essentially love songs to God. 'Heartbeat' for instance finds the team singing, 'I wanna know your heart. . . heart. . . Show me your heart. . .' There's nothing intrinsically wrong in relating to God in everyday language of love, after all God has often revealed himself in Scripture as husband both to Israel and the Church. Further, in many portions of the Hebrew prophetic books, we read of God expressing his love for Israel as a forlorn lover. However, the Bible also speaks about God as transcendent and it also uses poetically rich and resplendent images for God. Why isn't this aspect reflected in the songs? As a result of expressing God's love in a worship song as one would express human love in a love song, many of the songs here are as shallow as their titulars, 'Heartbeat', 'The One', 'Not Afraid', and so forth."

Similarly, the 'Heaven' mini-album doesn't pass muster with the Hallels reviewer. "If this album were graded purely on innovation and trendiness, this album will pass with honours. But if this album were to be judged as a worship record for the Church to sing, the grade is seriously discounted. Not too many of these songs are congregational friendly and the lyrics (in most cases) are pretty pedantic."

Mariah, though, clearly is adamant Mosaic MSC are scratching where people are itching. She said, "For the band, and for myself, it's really been about finding the sound that makes people a little more open. I find a lot of times it's more of a sound than like a lyric because. . . especially in LA - such a big city with so many young people, so many artists, entertainers and pace-makers, and all these things - it's so important that the sounds that they hear, sounds that they know that are cutting-edge and all of these things - they are like open to the arts. When they appreciate the art, they start to listen to the words a little more. For a lot of us, we've done music outside of Mosaic for many years, so our passion is just like listening to music and finding music and kind of being on the fringe of everything that's happening when we listen to it and when we make it. For us, that's been a huge part of it. . . kind of always pushing the limits of what we can do to keep that door open for people that aren't just within the church community that are saying, 'Those are great songs; they're edgy and different. . .' That kind of opens them up for the next level, which is listening to the words and engaging and asking questions. It really starts with that sound in the songwriting and producing process."