My Epic: The North Carolina-based rockers singing a new song

A recent addition to the Cross Rhythms Radio playlist is "Childbodybride", an uplifting acoustic-led rock song by North Carolina three-piece My Epic. The track is taken from the group's latest CD 'Broken Voice' - a mini-album that has received extremely positive reviews, which is surprising considering the songs featured on the project began life as leftovers from My Epic's previous release, 2010's 'Yet'. "I never knew where I was headed until God broke my will and gave me his. I never sung a song worth hearing until he broke my voice and made it his," explained lead singer and guitarist Aaron Stone.

My Epic formed in 2004 when Aaron and younger brother and drummer, Jesse, teamed up with bassist Jeremiah Austin at college and began to play small shows in their hometown of Fredericksburg, Virginia. After finishing their education the three bandmates relocated to Charlotte, North Carolina. "We moved into a poor neighbourhood together and simply sought to love those around us the way we feel Jesus lived and taught us to live," Aaron told Jen Conrad of ampmagazine.com.

The singer explained how the band decided on their name: "I wish we could say that there was a more impressive story to how the name came about, but it is fairly simplistic. We were in common agreement as to what we wanted the music to be, and the word we kept using to describe it was 'epic'. We were throwing names around a bit and [friend of the band] Matt brought up the idea of My Epic. The 'My' is not us, we more view it as God and we are part of the epic that God is writing. We were kind of pressed for time with a show coming up quickly, so we went with it, and over time it has been solidified as a name we are pleased with."

In 2006 My Epic independently released their debut five-track EP 'This Is Rescue' to critical acclaim with one reviewer commenting, "The amount of sheer beauty here is unmatchable, rivaling the beautiful falsettos and sweeping melodies of bands such as Sigor Ros as well as the intensity of emotional hardcore heroes Circle Takes The Square." Unsurprisingly, the group began to get attention from record labels and soon signed with Dreamt Music, a subsidiary of Christian metal label Facedown.

Speaking in 2008 to puregrainaudio.com, Jeremiah explained how the deal came about: "The interesting story behind our deal with Facedown is that we signed without ever meeting them, which was scary for us, and possibly for them too. Both sides trusted God and as far as I can tell, everyone feels at peace with the decision. We later met Jason at Cornerstone, and in conversation one day, we finally asked why it was he signed us and his answer was far better than we could have expected or hoped for. He simply didn't really have too much of a reason. He expressed that he enjoyed our music, but beyond that, he just had a peace that God would be honoured with the decision to sign us. So I think he, as a 'record exec', would say he has faith in what God can do through us more so than what we as a band could do by ourselves. And that is where we find ourselves. I don't know if I can speak for everyone in the band, though I am pretty sure they would agree, but I don't feel like a musician, anything musically that people enjoy from us we can honestly say is only God. I guess all that is to say that in a temporal sense we feel the weight of our relationship with Facedown, but ultimately, the true pressure we feel on tour and in writing new material is that of being proper conduits of God's love and redemption. That's a weight that is often more than we would like to bear if we are being honest with ourselves, but in the end is the only weight worth bearing." 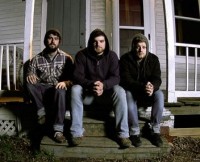 My Epic's debut album for Dreamt Music was 'I Am Undone' released in 2008. Jeremiah explained the inspiration behind the project: "While all of our lyrics have the common thread of our relationships with our God weaving through them, 'I Am Undone' is a far more cohesive album lyrically than our EP. This is due in part to our maturing and also our recent decisions to live life more intentionally and more intimately together. We definitely don't have things figured out, but we are doing our best to live as we think Jesus may have lived if he was in the same situation. The experiences we have faced and the lessons we have learned over the last year are what moulded the majority of the overarching concept behind the album. Aaron, who writes the majority of the lyrics, is currently working on his thesis, which is on C S Lewis and mythology. If you know much of Lewis's work, this probably comes as little surprise. We owe a substantial amount of lyrical (and spiritual, if you will) credit to that man. We don't claim to be breaking new ground, but we are burdened with the charge to 'sing a new song', so we sing."

The band's next project was the 2010 album 'Yet' produced by Matt Goldman who had previously worked with Underoath and Anberlin. The LP was a leap forward for the band both musically and lyrically and is considered by many to be their finest work to date. "We put a lot of thought into every detail and I really think we put everything we had into it," explained Aaron. "We felt much more secure in ourselves as songwriters and had a much clearer vision for the record we wanted to make instead of just trying to make sense of a bunch of songs after the fact. Also we had the amazing opportunity to record with Matt Goldman which obviously made a huge difference production-wise."

He continued, "On this record, we wanted to make sure we spread a message of hope. Yes, this world is fallen, yes we are sinners, yet God is in control and has given us a hope and a joy to live out each day with confidence that there is something better to come. 'Yet' refers to the hope and the period of time that falls between a dark world and a beautiful loving God."

The songwriting sessions for 'Yet' had proved so fruitful that the band were left with a number of acoustic-based songs that did not fit with the sound of the album. Aaron recorded these songs earlier this year with a new My Epic line-up comprising of Matt Doran and Tanner Morita at Sleepwalker Studios, Winston Salem, North Carolina with producer Sid Mennon. "More than anything else 'Broken Voice' is about joy," commented Aaron. "The last year of my life has been about finally learning that I don't have to fight God to get what I need. I don't have to prove myself to him either. Jesus came precisely because none of my own methods would ever work. I had been striving so hard for perfection when all I ever had to do was surrender to it."

Stone concluded, "The best thing about being in the band is the way it stretches our faith daily. The worst thing is when we lose our focus and let the wrong things become the main thing. We are just another band out of a million. There is nothing new under the sun. . . we try to be honest, we try to be creative. We feel very thankful for anyone who gives us a moment of their time."

For more on My Epic visit the My Epic artist profile