My Glorious: How an unsigned band from Austria came to hook a top producer 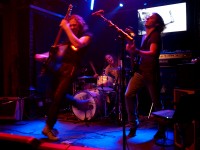 For the majority of Christian rock bands, getting a top rank producer to record your album is about as likely as winning the National Lottery. So the news that Sylvia Massy, the legendary engineer/producer (Tool, Red Hot Chili Peppers) is to produce the new album by rock three piece My Glorious is amazing particularly when one considers that this unsigned band are based in a city hardly renowned for edgy rock music - Vienna, Austria. At a recent press conference Ms Massy, owner of RadioStar Studios in Weed, California, spoke of how she came to link up with three passionate purveyors of gospel rock from the birthplace of the waltz. "I stumbled across them on their MySpace page. I wrote and I was like, 'Hey, these are really good songs' but I didn't get a reply. Then [my friend] Christy came and, by complete coincidence, [she'd come across My Glorious]. She said, 'Hey, did you hear this band? They're from Austria,' and I was like, 'I wrote to a band in Austria.' So I wrote again."

The band's lead singer and songwriter Sami Fisher takes up the story. "I did get Sylvia's second MySpace message: the one that she sent to me that I actually did respond to. I did think it was funny. Because I didn't know Sylvia Massy's name, which I know is embarrassing. So I thought it was just some girl who's got a home studio and she wants to produce this band. Because on MySpace you get so much crap. So I just left it. Then in the evening I was feeling bored and I googled Sylvia's name and then felt like a complete idiot. I wrote back straight away with, 'Yes!, Please, let's work together.'"

When My Glorious made the long trip to Weed, California neither party knew quite what to expect. Said Sylvia, "When you invite someone to come and record with you it's often like a blind date. You don't know if what you'd heard is actually their songs of if perhaps a remixer had a lot to do with the sound or the arrangements of the songs or whatever. So you don't really know until you get in a room with the band. But when My Glorious came and I heard the entire album, song by song by song, it was like opening up presents at Christmas and they kept getting better and better. So I was really happy and I think we had a terrific date."

Responded Sami, "We came here not really knowing whether Sylvia was like a traditional rock producer, someone who does a very modern sound, someone who is into taking the songs and changing them to something she likes better. So we were kind of nervous, I think, but then we were really just happy for the opportunity. When we got here, we were very surprised that one of Sylvia's concerns in working with a band is to find the essence that is already in the band and to amplify that. So the worry that she would change the way we sound or what we wanted to do went away very quickly." 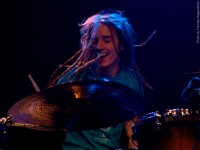 Sylvia decided to record the project the old school analogue way. "The idea of using two-inch tape is a rarity these days. We do have a stock of tape and we use it when we can. It does take a little extra time but it made sense with this project sonically, to kind of give it that grainy, full sound, and that is the My Glorious sound. So it seemed appropriate and we spent a little extra time to make that happen. The other thing which is a rarity is that we kept almost all of the original tracks from tracking, so all the songs were played and edited but not over-dubbed. Some fixes were done, but very little was done. So what you hear on this My Glorious record is really them playing. It's not a fabrication of what they can play but it's really them playing. It's far beyond that too because it's the developing of the songs. The core of the song is them playing live and then we were able to travel with those songs too and add strings and keyboard parts, and do some overdubs with guitar, and layering vocals and it's just fantastic."

Sami added, "You see that was another thing that was really good for us because we just like the vibe of the three of us playing. In the traditional way of recording you would probably have the drummer record a basic track and then have the bass player play over it and then the guitar player. I guess it works for most bands but for us it's all about the three of us playing at one time and that was something that we didn't know Sylvia would like. Because we like it doesn't mean it's the best way so when we came we were relieved that we could actually do that. Studio A is a big theatre that's got a good vibe about it, standing on stage and playing the songs as if it were live. That was a very good experience. I think also that a big part of our sound is actually the fact that we are playing live together and I'd like to think you can hear the energy of that happening during the songs."

Observed Sylvia, "I also think that there's something to say about three people playing in a room and how the room is as much an instrument as the instruments that they are playing. I think that particular time and space was perfect to bring these songs to life."

(photo by Will Strange)

My Glorious consists of UK-born Sami Fisher (vocals, guitars) and Austrian twins Gregor Sailer (bass) and Paul Sailer (drums). The band were born out of the ashes of an earlier pop rock band, Fresh. From the beginning of 2008 My Glorious toured Austria, Germany, Bosnia, Croatia, Israel, Palestine and Britain as well as the US five times. Their debut EP 'Leper' (2008) got quite a bit of play on US college radio.

Their first full length album 'Home Is Where The Heart Breaks' (2010) did even better, being nominated for the prestigious International Independent Music Award in the category Best Concept Album. It will be intriguing to discover what the judges (who include Ozzy Osbourne, Seal, Suzanne Vega and Jeremy Camp) will make of 'Home Is Where The Heart Breaks'' powerful, propulsive tracks like "Love Extenders" and "Break My Heart". But now, of course, most attention is focussed on their forthcoming Massy produced set. Commented the session-seasoned producer, "There are a lot of bands that I think follow sounds or current trends and as much as those may be the lower risk commercially, I'm really interested in art and the quality of the music and creativity. I could see that My Glorious were willing to reach out into unknown areas as far as the instrumentation and the arrangements [were concerned]. The arrangements are not traditional arrangements and they don't seem to be following a trend. However, I think theirs will be music that will be liked by a lot of people who are really paying attention to good music."