With a new line up and a devastating new recording R&B and rap ministers N-DAZE are moving on up. Tony Cummings reports. 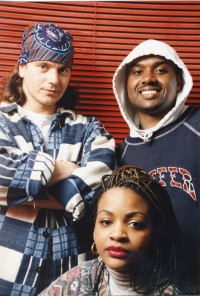 Anybody who saw their riveting performance at the 1994 Cross Rhythms festival or heard their sensational 'Kicking The Hell Out Of Music' cassette album release from the same year will know that London's N-Daze deserve their reputation as one of Britain's finest gospel R&B/hip hop bands. It seems extraordinary that it's taken until now for the band's debut CD to emerge but now that it has UCB Cross Rhythms have weighed in with serious radio support. 'Chapter 1' EP features some scorching tracks including a cut "Famegame" featuring the sinuously soulful vocals of new N-Daze singer David Fisher and a searing rap from Paul Sevier which scathingly highlights the spiritual compromise of much secular R&B and rap.

Explains Paul, "I once had a major record deal and really lived the rock'n'roll lifestyle - the drugs, the women, the good restaurants, the designer clothes - so it really put me in a position that I was able to talk about the secular music scene. What I found after becoming a Christian is that when you look on the back of the album sleeves of a lot of R&B singers and rap people they're saying, 'We want to give thanks to God and Jesus for his inspiration' on an album where they're swearing and cussing. I just felt a righteous anger, to really bring the truth so that we can tell those people, "Look, most of you have come out of the church and you've prostituted your gifts.' Just as King Nebuchadnezzar went into the temple and took away all the gold of Israel and melted it down, what God is saying to us is that Satan will try and melt down the gifts that are in us and remould them for his purposes. And when you see people like the rappers and the R&B singers, most of them having come out of the Church, you're seeing artists who've prostituted their gifts. They've not been patient enough to wait on God. They've sold out to people who've said, 'Come on, get your stuff out, use your talents,' and that's what they've done. Most of those people now are hurting. They need to hear what God is saying through us. For God does love them, that they're being drawn with chords of love. But they also need to know they're wrong and repent. It's tough love that they need to hear."

Expressing the tough love of the Gospel of Jesus Christ has been at the forefront of the N-Daze since they formed in 1989. The three founders were Dave Beard who today acts as the band's manager and spiritual overseer, Tony Miller, who left the band in 1995 to become a successful pastor of a church in Brixton and Rob Amponsah who is still today the band's engineer, producer and all round studio whiz. Rob was heavily involved in the club scene prior to his conversion and still vividly recalls his first encounter with the church. "Somebody kept hassling me to come to church. And I said, 'No, I'm not going to go, you're all freaks and weirdos.' Finally I said, 'I'm going to come one time, just once, then don't hassle me any more.' I was sitting there on the pew upstairs and the preacher, Benson Idahoza, was downstairs prophesying. I didn't know what he was doing at the time. He said, 'There are 10 people who need to get saved today.' And he started pointing people out in the congregation. I didn't know what was going on. He pointed at me. I responded to the altar call, went down the front and have never looked back since."

When Rob met up with Beard and Miller at a barbecue the trio began experimenting with music making in the most primitive of home studios. Remembers Rob, "My first studio was a bedroom set up, a couple of turntables. But when we started N-Daze people started giving me equipment, effects units, keyboards, a 16-track, drum machines. I ended up with so much equipment that I had to start giving it to people who were starting up."

In 1992 the trio released a house-orientated 12 inch single "Change Your Mind" on the band's own Sound Doctrin' label. But it was when rapper Paul Sevier joined N-Daze that the team began to find their musical focus. Paul recounts how in 1980 he'd had an embarrassing introduction into the world of rapping. Going with a friend who could rap to a nightclub, Paul enthusiastically told the management and soon Paul's friend was being asked to take the stage. "My mate wasn't very happy that I'd put him on the spot. So he got up there and he started rapping. But then he handed the mike to me! And I couldn't rap to save my life! So I got, for the want of a word, tomatoes! I was very embarrassed. So I went away for a few months and almost hid myself. I thought I'm really going to try and do this (rapping). And that was my starting block so to speak." 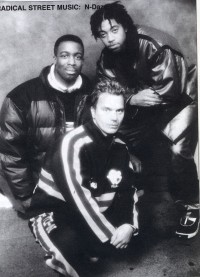 Paul went on to major things. A recording deal with Warner Bros with the band Hoodlum Priest, commercials, a break dance film. And in 1985 Paul won the British Rap Championship. "It's really funny," remembers Paul, "because Rob who is in N-Daze was there that night in the crowd. When I became a Christian five years later I went round to his house for the first time and he said to me, 'You really remind me of this white guy I used to see rapping in the clubs.' And I said, 'Oh yeah, what was his name?' And Rob said, 'Some guy called JuniorG.' I started to laugh and said, 'That was me!'

Paul recognises that despite a far from Christian lifestyle the hand of God was on him even back at the British Rap Championship. "In 1985 when I went to the Wag club I had a bit of a drug problem," admits Paul. "Yet though I wasn't a Christian I took a Bible with me! Now in the rap scene then there wasn't a lot of unity amongst the rappers, people were slagging each other off. I'd had a lot of people slagging me off because I was a white guy in a black scene. So I got up there on stage with this Bible in my hand and I said, 'This is the truth, the whole truth and nothing but the truth, so help me God.' After that they were really rooting for me. And I went away with this trophy... I needed to anyway; I didn't have any money to get home!"

It was Paul Sevier's breathtaking raps on N-Daze's 'Kicking The Hell Out Of Music' release in 1994, which made the tape an underground best seller at places like Soho's Dual Edge Records. Yet despite a little interest from the record companies (the band had a dance orientated track on the 'Cross Rhythms' N-Soul compilation in 1996 under the name OOM) no more recordings came out. That changed in 1998 when a new line up of N-Daze emerged with the band now fronted by singer David Fisher and rapper Paul Sevier. They began working on their 'Chapter 1' EP with producer Rob Amponsah. David Fisher explains how he came to join N-Daze, "I joined the group last October. I'm 20 now. When I was 16 I started singing with a group called BASIC - Brothers And Sisters In Christ, there were seven of us plus three musicians. Also, prior to joining N-Daze I was in a choir, UNI Gospel Choir. I hooked up with N-Daze through a friend I used to sing with who told me about this group meeting to pray about the music industry called Worshipping Warriors. So I went along to one of the meetings and that's where I met Paul. And a couple of months later he asked me to join the group. I believe this is just the beginning of what God has planned for my life."

Dave vividly remembers how he first got drawn to Christian music, "It was one night at Jamboree on New Year's Eve at the City Temple in London. I saw this group called Raymond & Co. Raymond was this black guy with mini-dreadlocks, gold teeth, sharp dressed and everything - he looked like a ragga DJ! I saw him on stage singing for God and praising God's name and I said, 'If he can do that then I can do it.' So he was my inspiration to get up on stage and grab the microphone and use my gifts to praise God's name."

David is confident of the ability of N-Daze's in-your-face R&B and rap to reach youth with the Gospel. "For the young people today they won't stand around to hear a sermon. They don't want to hear someone talking down to them. They don't want a lot of rules and regulations. They want to hear reality; something they can grasp and feel is real. You go to a concert today they have video screens; a lot of things are visual now. If we bring the Gospel through rap or other forms of popular music it communicates that God isn't a boring God, rather he's a God who loves. So we're taking the Gospel to young people in a form they can relate to."

A Jesus-focused ministry is very much at the heart of that entire N-Daze do. Recently on UCB Cross Rhythms Paul Sevier was asked if he had a message for today's youth. His response could hardly have been harder hitting. "I believe very strongly that you are the generation that will see the coming of Christ. The Bible says that those who will see the coming of Christ will be transformed in the twinkling of an eye. You will not experience death; you will experience the transformation of your natural state to a supernatural state. So stay full on for Jesus, stay humble, and don't seek his hands and what he can give you but seek his face, and desire to know him. And when you have a reverence for him and a fear for him, and it's a fear for God which shows that you love him and you'll be obedient to him. That's your highest calling."