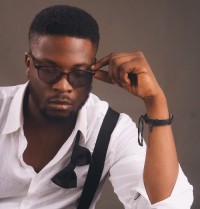 One of the growing wave of gospel Afrobeat artists who are now breaking through in both Nigeria and the broader international market is NKay. The Lagos-based rapper's duet with star Gil Joe "Nobody (ftg Proud Refuge)" and "Issa No" are both xRhythms radio hits and if you're looking for sunny, energising grooves to go with your spiritual flows look no further. xRhythms' Rejoice Mawire spoke to NKay about his rise and rise in Afrobeat. He told her how he entered into music making.

"It was 2014 when I started Uni. You know how the first year can get, easy, chilled, so I was working at the time and I had time on my hands at Uni. A friend of mine wanted to put together a mixtape of different artists and he sent me about seven beats and said write something and I wrote something on it. I didn't even take is seriously. There was a competition going on in Nigeria at the time with some popular gospel artists of the time. I had a friend who had a really amazing song and I sent him my friend's song and tagged mine on, which wasn't even complete, I hadn't finished up in the studio, but I put it on just so he could listed and let me know what he thought. It turned out that after they heard both tracks they got back to me and they were like 'yours is amazing'. It wasn't about me - it was about my friend's track. I went away all confused and literally, that's how it kicked off."

NKay's rise in recording success has been sure and steady. "When I dropped my first single, 'Your Love', everyone thought it was a love song for some reason. It wasn't a love song, it was a gospel song. Everyone thought it was a love song so it was getting played at weddings every other weekend, especially in the UK. I would be in my house and then someone would send me a snapchat video: 'They're playing your song here, they're playing your song there.' I remember one time I was at the airport in Nigeria and then I got across the legendary artist True Faith. He'd heard some stuff and said it was really good and I was like 'Oh wow'."

Impressively, alongside all his acclaim as an inventive rapper NKay has relentlessly pursued an education in law. He stated matter-of-factly, "I'm getting called to the Bar in Lagos next week as a lawyer. I have held those two together, law and Afrobeat, very well over the years. It is a long path getting called and I've held those two together very strongly over the years. It's taken a lot of discipline. I have a studio set up in the house and I'd get back from work about seven or eight pm then go in the studio at nine until three am. I did that every day for months. It's taken a lot to balance that but I'm grateful for both."

NKay is very aware that his powerfully rhythmic music has a way with connecting with people who don't go to church. Recounted the rapper, "Myself and my team were working on my latest song 'Since You Came'. I had a conversation with a girl who happened to be there. She kept hearing the song over and over and she thought 'this sounds good, what is this?' She went back to listen to it by herself and then she sent me a paragraph talking about how the music feels so relatable, like you don't have to be someone who has their act all together and be so clean in order to listen to it. She was like, sometimes it feels like you have to get to a clean place to listen to the songs of Hillsong and others. Then you listen to this guy, a regular, down to earth guy just like you who is singing everything about his faith, and you can play it in the car without having to feel like 'oh yeah, did I do wrong today or have I sinned' before I can listen to this. I think that's what I'm trying to achieve with my music is transparency and relatability; I want people to just get it no matter who you are or where you're from, listen to it and let it speak to you."

It's not been an easy journey for the gospel Afrobeat pioneer. He remembered, "At some point between 2016 and my first EP in 2017 I never recorded anything. I was like 'You know what - I'm done. I'm done with music.' But then Gil Joe, who is a very good friend said, 'We should put out a joint project" and I was like 'OK, yeah.' It wasn't anything where we were too serious and I just said 'I've got this beat; what do you think?' And I just mumbled a bit on there. I was just working on it in the studio with the mobile mic. That song was 'Shackles' and we dropped it as a single. It got big and we thought what's going on, it just kept getting bigger. I remember a song we put out called 'Far And Wide' and it was doing so well but we didn't have money to shoot a video. We went for an event and thought we were going to get enough money to be able to shoot a video, but when it came it was just nothing. I was like 'what is this?' It was a really, really dark day. I was depressed for so long and I couldn't even make music. I would go into the studio and not even be able to write lyrics. It's been a journey to where we are right now. So yeah, there've been dark days but I'm thankful for where we are now."

So is there a particular message above all others that NKay is trying to communicate in his music? "Yes, it's that LIFE HAS MEANING. Without God life is empty. I had this feeling hit me back a couple of weeks ago. I studied so hard for my Bar exam, the results came through and it doesn't even feel like how much you make it to be, how much we praise it. It's like there's so much emptiness to life and you need something beyond this realm, beyond this fear, to really hook your hope onto. I feel like apart from anyone trying to force you to believe in something, just check it, really check it, that life really has a lot of emptiness and there's more to it and the only more substantial thing than all the things we have out here, is God. So take your time and check it and don't let anyone pressure you."

The opinions expressed in this article are not necessarily those held by Cross Rhythms. Any expressed views were accurate at the time of publishing but may or may not reflect the views of the individuals concerned at a later date.
About Rejoice Mawire

Rejoice Mawire is a Business graduate and the content controller for xRhythms.