Tony Cummings asked Tim Sherrington of NAMELESSMUSIC about his move to worship. 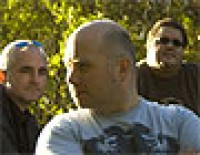 Tony: We know you were the front man in The Electric Revival and before that The River Thieves. What have you been doing since you stepped away from rock bands?

Tim: When I left TER in '96, it was quite simply because I clearly heard God call me to give up playing in bands and to focus on serving young people. It wasn't something I wanted to do, but at the same time God was teaching me about obedience. At that time, although I played in the worship band in church, playing in a worship band or even writing worship songs was not really on my agenda. Since then (now five years ago), I have continued to serve my church (KC21 in Aldershot) as part of the youth ministry and seen some great fruit from that, as well as grow the worship side of things.'

Tony: Undone' seems a very fresh approach to worship. How did the album come about?

Tim: At the end of 1999, about 18 months after starting NamelessMusic, I felt very strongly it was time to consider putting some of the songs I had been writing onto an album. I met with the ministry team at church and we agreed we wanted to release a live worship album. I was keen to capture something of the passion in the songs and people singing them. From March to June 2000, myself and the band (only formed at the beginning of the year) started work on various songs and arrangements. The name came early on but the song "Undone" came much later, highlighting a new challenge - I was still writing, literally just weeks before the concert at which the album was recorded. I am really pleased with the results. I believe we have produced an album of passionate and anthemic songs that speak of a hunger for Jesus, to know him totally in our lives and live every day for him.

Tony: These days Christian consumers are inundated with worship albums. Why should they particularly look out for yours?

Tim: In the current Christian music climate in the UK, where live worship albums are starting to dominate the music market, it was perhaps not the most original decision, but again, it was about being obedient. Why should people choose it? I would like to think for the strength of songs and worship heart. There are many worship albums just as there are many contemporary Christian music albums. Why pick one of these over another? Usually because the songs are good and played well. It is no different. What I would say is that if people are looking for ANY Christian music that is anthemic, passionate and intimate, they should consider "Undone".

Tony: Give me a bit of history on Nameless Music.

Tim: The vision of Nameless was inspired by a prophetic word that Chris Bowater from New Life Church, Lincoln brought to the young people of the King's Centre, Aldershot in March 1995, although we believe the word was and is for all young people. It contained a section which talked of God looking for ".....a nameless and faceless generation that is not looking for place, power or position, but is just looking to get the job done." We desire to remain true to this word by being part of a generation that wants to see the Kingdom of God established in the United Kingdom and the world. As a result of Chris's prophetic word, Nameless Music was started in 1998. Our desire is simple - to create and support worship music in various forms - music, songwriting, dance, flags, art - that stirs the listener to a greater desire to fall in love with Jesus more and more each day and teach people, both practical and in lifestyle, what it means to be a worshipper. Nameless Music is a worship resource that is available to serve the Church.

Tony: Worship music seems to be undergoing a revolution in this country. Where is it all leading?

Tim: I could say, 'I hope to the throne of God.' I believe that there is a hunger in the Church for music that does more than inspire, sooth or entertain, particularly what CCM might do. There is a hunger for music that draws people to the throne of God. When I produced music before it was because I wanted to write and perform good Christian songs with a good message. God has moved me on personally and now I can't help but write songs that give him the glory and draw others in, I think that is the difference: one day we may well see shelves full of music that touches the throne of God and draws the Church in rather than entertains. That hunger I spoke about needs to be fed and as a result more and more worship bands, rather than CCM bands, will crop up.