Natalie Grant: Using her weapon to defeat the attacks of the Enemy 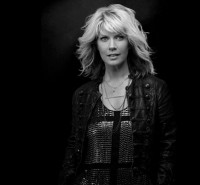 A broadcaster recently called Lauren Daigle "the new Amy Grant". A more accurate description of the New Orleans-born CCM star would have been "the new Natalie Grant". For there was a period between 2006 and 2012 when it was Natalie, not Amy, who was regularly winning the Dove Awards' annual Female Vocalist Of The Year nod. But since those halcyon years, the much-loved singer has had to deal with huge challenges to her health and so now that Natalie has returned to the scene with a brand new single, there will be thousands of Christian music enthusiasts checking out her new song. Written by Grant, Andrew Bergthold, Benji Cowart, Ryan Ellis and Jonathan Jay, the single "My Weapon" is the first from her highly anticipated 10th studio album, to be issued later this year.

Considering Natalie's battle against cancer, "My Weapon" clearly has a deep personal relevance for the CCM star. She said, "Whatever current difficulty or hardship we find ourselves in, there is one thing that is a source of comfort and strength above all else, and it is also our greatest weapon - the presence of God. And his presence is always with us. Joshua 1:9 reminds us to 'not be afraid; do not be discouraged, for the Lord your God will be with you wherever you go.' So no matter the fight, we never fight alone. May this song remind you that God is with you and God is FOR you, fighting your battles. He is your victory."

Thanks to Bernie Herms' lush production utilising the orchestral skills of the London Symphony Orchestra, Grant's soaring vocal brings home the uplifting lyrics: "Your presence is my greatest weapon/Pushing back the darkness/Breaking every chain/My worship opens up the heavens/Crushing every stronghold/When I speak your name/Your presence is my weapon."

The major crisis in Natalie's successful career occurred in 2017, when she was told that she had papillary thyroid cancer. Many medical experts thought that even if the urgently needed surgery was successful, her singing career would be at an end. However, within two-and-a-half weeks of the operation, Grant started practicing small vocal warm-ups with voice coach Diane Sheets who had experience rehabbing singers following that surgery. Grant was terrified to even try, but when she did she watched Sheet's eyes widen.

Grant told the Tennessean newspaper, "Diane said, 'Why does your voice sound so good?' I said, 'I don't know but it came out so much easier than I thought it was going to.' From the get-go, we had this confidence all of a sudden." Grant slowly intensified her sessions with Sheets. When the singer experienced a tightening sensation in her neck, Sheets knew it was caused by scar tissue and performed laryngeal massage to keep it from attaching.

The singer had a flicker of hope that she could perform on a previously planned Christmas tour, if only a couple of songs. The week of Thanksgiving, Herms sat down at the piano and Sheets encouraged Natalie to try and sing her entire show - 11 songs. The tour was due to start in a week and the couple was hosting friends and family for the holidays. Herms played and as Grant started to sing, their loved ones streamed into the living room. She made it through every song at the top of her lungs.

Natalie told the Tennessean, "I started running around the room bawling my eyes out and dancing like a crazy person." Her husband added, "We were screaming like little kids."

Grant was able to do the tour and two weeks after she was declared clean of cancer, her song "Clean" earned the Grammy nomination. Grant had written the song for a friend who was struggling to deal with sexual abuse she had endured as a child. But hearing the words that she was clean of cancer gave the song a whole new meaning.

As well as her singing, Natalie has written six best-selling books. When speaking to Huffpost about the theme of her book, Finding Your Voice, she said, "As women of God it's important to find our voice because if we don't find it, and if we don't find it rooted in Christ, our culture will find it for us and will dictate what it is. That's why it's so important to find our voice, and also to find our passion. There's a difference between passion and purpose. The way we live our purpose depends on our passions. Our purpose as Christians is the same: to live for him and walk for him. But our passions are different, and it's crucial to find our passions because if we don't, our voice will be drowned out by the messages that are prevalent in our culture - a fact I know from personal experience."