Nervous Passenger: The Edinburgh-based band with their own record label

In April, Edinburgh band NERVOUS PASSENGER took time out in the middle of recording and spoke to Dougie Adam about the 'Ocean Air' EP, setting up Room 3 Records and their long awaited album debut. 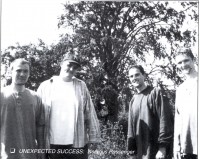 It's hard for founder members to recall when Nervous Passenger really started out. Neil, Jamie and Stuart played their songs on three guitars to a supportive local church for years before anything happened. Stuart was persuaded to take up the bass, and shortly after Jamie had just splashed out on a new guitar, Neil and Stuart talked him into becoming the drummer! The band played their first ever support gig in October 1996 at Glasgow University Christian Union and this was followed soon after with an acoustic set at the re-opening of the Wesley Owen store in Edinburgh. Donald's piano and keyboards completed the line up. Despite their inexperience, lots of offers came in for more gigs and many people were now asking if they had any tapes for sale.

Neil explains how the band came to record what was to become the 'Ocean Air' EP. "We'd only been around officially, as Nervous Passenger, for about a month at this stage. Then Fraser (sound engineer), stepped in with the idea to record a five-track demo EP which we weren't even planning to sell. But so many people were asking for it we decided we might as well sell it." All 500 copies of the CD sold out comparatively quickly, exceeding the band's expectations. Items on the internet even attracted interest from college radio in America and one bookshop there promptly ordered 10 EPs. Yet everyone seems almost embarrassed by their first release. "I think that for a recording on a very tight budget and time scale, the result wasn't all that bad," offers Fraser. An enthusiastic review in the pages of CR increased the momentum building up. "The response from the review was incredible. We were getting enquiries from Europe and America asking us for a copy of this CD, and the next album." The mention of "the next album" reduces everyone present into stitches. By the time it is eventually released 'Taller Trees' will be nearly nine months late.

Reasons for the delay are numerous, ranging from over-confidence about how quickly it could be recorded, to a desire to get it right this time. "Poor quality because it's Christian isn't an excuse," explains Donald. "It has to be done right. We want to bring glory to God by making a good album." The band have been conscious of God's provision of money for the equipment required and have set up their own studio and label so they can spend time recording things to their own satisfaction.

"I like to think we've got our own sound. I don't think you can pin us down exactly. When you start playing together you are picking out different influences to round into your own style." Neil suggests, "What I would say is, if you haven't heard us, then invite us along. We 'have van will travel', we've played before 1500, we've played before five. We'll play anywhere as long as people want to hear us. (Pauses) And if people don't want to hear us, well, we'll play anyway!"

When I ask what the band have been up to live, I'm taken aback by the variety of things they've been involved in during their relatively short time together. Playing gigs by invitation, working alongside Youth For Christ, Christian Unions, church youth groups, Scottish Prison Fellowship, Release The Power at the SECC in Glasgow and a support slot for Ian White in front of 1500 at the Usher Hall. The band's concerns about the cost of starting out recording and gigging seem to have been well and truly taken care of, as Donald explains. "We look back at the cost of making 'Ocean Air' now and think 'so what?'. God is faithful if you're doing something that is within his will. So often we think that money is a big problem. But to God it's not." Jamie continues, "Things have built up and God has provided the money and we've got all this equipment now, to be able to up, go, and play without having to hire much stuff." Neil adds, "A lot of places can't afford to give you much money, but because God has provided all this equipment for us we are able to go and play for a reasonably low price."

Do Nervous Passenger ever see themselves signing a deal with a Christian record company or any secular labels? Donald begins pragmatically, "We've worked hard at developing Room 3 Records which has been our own label. That's not to say that if a major Christian or non-Christian company approached us then we wouldn't think about it. But we've had negative responses from them all so far!

At the end of the day we're not necessarily all about making money. We're about sharing Jesus and the excitement which that brings. We can produce an album; we can distribute it - no big deal. We just had to go out and do it because none of the Christian labels were putting any money up..." Another influential factor in the equation is the fact that besides being in Nervous Passenger all the members have other commitments to take into consideration. "We've all got family commitments. Donald's got a family and Fraser's working on it!," Neil jests. "We're all involved in youth work at the church; we've all got full time jobs, so it's a matter of fitting things in." When I ask if there is anything else they'd like to add to what we've already spoken about Neil jumps in, "A big thing for me is that I feel that God has really called me to encourage Christians who are finding it difficult, maybe going through some of the things that I myself have gone through and have written a song about, and have ultimately found the hope that can only be found in Jesus."

As I think back, months after the encounter to our first meeting I remember the banter that existed between the band members, their obvious commitment and a dedication to doing things professionally, but most of all their sense that this was part of the way in which God was calling them to serve him. Something which Jamie said seems an appropriate note on which to end: "It's kind of blossomed under God's clear guidance and faithfulness. It's been a snowball effect onto bigger and better things until we got where we are now." With Taller Trees' now completed Nervous Passenger are waiting to see what else lies ahead of them and their impatient following at last have something to accompany the 'Ocean Air' EP in their CD players.