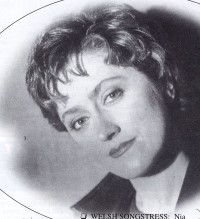 It's entirely appropriate that Britain's most popular Christian female singer should be undertaking a tour with Britain's most popular Christian radio station. The Nia/UCB Anniversary Tour commemorates 15 years' tireless work for both the Welsh pop gospeller and the pioneering radio station. Because there is bound to be some nostalgia in the air, particularly as Nia has just released The Anniversary Album: The First 15 Years' retrospective of her ministry I began by asking the lady to choose two or three highlights from her wealth of memories.

"The biggest highlights are undoubtedly the Mission projects. Opening a soup kitchen in a refugee village in Armenia two and a half years ago and now running it every day. Delivering a mini bus to an orphanage that had no transportation five years ago and still maintaining it with all repairs, maintenance and petrol. These are the most memorable landmarks for sure. I'm trying to grow up you know, to look beyond me, myself and I and make my life matter to others rather than just for me.

"Highlights musically - Singing to a sell out crowd at St David's Hall Cardiff was quite something and performing at the Crystal Cathedral in California which was televised for a world wide viewing of 30 million. Having the opportunity through the media of my own Radio show on BBC Radio Wales - reaching people who would never turn up to a church. Next month I'm on a TV panel with Terry Waite and Elaine Storkey with a studio audience firing questions on faith. All these opportunities are treasured memories and as the years go by, there are more of them. I usually find that the most memorable things are the things I'm most afraid of - which means I have to wholly trust God. That's a good thing."

I wondered how the tie up with UCB comes about? "As with many decisions in a career ministry, management plays a large and vital role in such decisions. My management are working behind the scenes every day on an incredible variety of issues. I doubt any work harder than my management and as a result I've been privileged to work with many organisations around the world throughout my 15 years of ministry. As for UCB - we worked very closely together last year for the OCC Roadshow and the partnership worked so well for us both we thought we should approach them with our plans for a major tour this year, with it being my 15th anniversary. We thought it would be nice to do a kind of 'memory lane tour' - so we contacted UCB to see if they'd work with us again on the tour and they jumped at the opportunity. Then at one of the meetings it emerged as being their 15th Anniversary too....So it's a celebration for both ministries."

When I asked the singer whether she thought Christian radio, even with the limitations placed on it in the UK by licensing restrictions, was a valuable resource for ordinary Christians Nia responded by quoting Philippians 4, "Whatever is true, noble, right and pure, whatever is lovely, admirable, excellent or praiseworthy, think about such things.' Christian radio is a wonderful way to be encouraged in your faith, just like with Christian books or music. However, I've had people say to me in the States, 'You don't have Dr Dobson's Focus On The Family every day on radio in England. How do you know how to raise your children without that?' I think it's dangerous when your life is dictated by anything other than the Word of God. All such things within the Christian culture like radio, books and music should re-enforce our beliefs, not dictate them."

I asked the singer to tell me about her two new releases. "The 'Anniversary Album' is really a special edition CD with 15 songs, selected from my first recordings in 1986 through to the latest album released this summer. The booklet enclosed is like a scrapbook of memories from those years. Stories as to why I've chosen the songs, excerpts from letters from people for whom these songs have meant so much - kind of 'the story behind the songs' I guess. The other album is 'A Time To Worship' which is a collection of my favourite praise songs from recent years along with some of the great hymns that should never be forgotten. This is my third worship CD release. Because I use a lot of worship songs in my concerts, people have asked me for years to record them and make them available. My favourite from the new album is 'How Deep The Father's Love For Us' which so many at my home church in Leeds Nazarene have encouraged me to sing. It turns out they were right, it worked well. 'Open The Eyes Of My Heart' is another favourite, especially in concert, and the album finishes with 'It Is Well With My Soul'. This vocal was my first and only take in the studio. It was just a God thing - it's beautiful and it seemed so right to put it on the Anniversary album too, as a kind of benediction of saying Thank you Lord for all you have done through me, in me and in spite of me these past 15 years. Because of you and you alone, it is well with my soul."