Nic Paton: The independent songsmith talks about his art

London-based singer/songwriter NIC PATON spoke to Tony Cummings about his life and music. 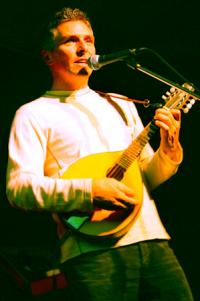 THE RISE OF DIGI-FOLK: Nic Paton

When Nic Paton climbed onto the stage at Greenbelt 2004 he was very much a "new to the scene" artist there to promote his independent album 'The Middle Of It All'. But in fact this hugely talented singer/songwriter is hardly a raw beginner in the arts field. He was in fact a founding member of the South African musical collective Friends First, whose 'We See A New Africa' became a Christian music hit in the 1980s while possibly even more impressively he is the grandson of Alan Paton, one of the giants of South African literature. On a visit to the Cross Rhythms studios I asked the London-based songsmith to tell me about his background. "I was in fact born in Cambridge but I was raised in South Africa so I'm possibly more South African than I am English. For the last 12 years I have lived in London with my wife and we've two young kids now so we're a family in London in the pressure cooker. But if you wanted to start at the beginning: my dad studied at Jesus College, Cambridge - he was studying English - and during that time, as he and my mum jumped on the boat in Durban, in South Africa, she announced to him that she was pregnant so I was the surprise third member of the party! My roots with England are interesting and slightly mystical and may relate to the fact that I was born here."

Nic's interest in music started at age 11 when he began tootling on the recorder. "I went to a couple of music lessons then and the thing that I remember was the combination of cheese and digestives because that's what the recorder teacher used to serve us! I taught myself to read round about that time as well. I then took up the clarinet at 13, couldn't really commit myself, kept on being bribed by my teachers 'cos they noticed that I was talented but I really couldn't put the work in. But then I discovered, I think, David Bowie when I was about 15. I didn't ditch Beethoven exactly 'cos I'd never really taken him fully on board, but my passion for music set in round about then, 14, 15, and I started playing the guitar. I also started getting interested in the saxophone so I guess I started those two instruments at the same time. I was highly, highly interested in music and my academic life did suffer as a result. I didn't do that well in my high school finals because I was really interested in Led Zepplin for that year. Five years after I left school, I finally decided that I wanted to go to university, much to my parents' relief, and I did a degree in jazz in the University of Quazulunatal in Durban. It was run by Darius Brubeck, who's Dave Brubeck's son. His wife, Cathy, is an old friend of the family so we had really strong connections. But my family is not musical. I've got quite a lot of stuff on the website about the Paton Connection, if you like, to music. My grandfather was a notorious music hater though."

When Nic was 18 he had an unexpected spiritual experience. "I was serving in the South African Defence Force, which is not a place to be recommended. I had a very hard time of it. I had a spiritual experience during those years. The passion for music in one sense pre-dated any Christian experience that I had and created an enormous tension and confusion for me for a good couple of decades thereafter! I don't know if you know what I mean but, I think that I was extremely . I was quite idealistic. I suppose from that time on, from 14 onwards, I was very idealistic. I ended up having two instruments and thinking this is not good enough, I've got to have only one instrument. I struggled for years and years to only do one instrument and never made it. I ended up playing guitar and veering towards rock on the one hand and saxophone veering towards jazz on the other hand."

After his Friends First experiences Nic gradually drifted away from music. In 1994 he arrived in London. It wasn't until 2001 that music ignited for him and he began to write songs again. It was the Trade Center attack in New York which brought forth in Nic the dark, brooding composition "Farewell To Innocence". He remembered, "I was sitting at my desk in a bank and the song just started coming to me. I was reunited with my life's love that night because I went home and actually wrote the music to it. I'd been trying very hard, stuttering through the years between 1994 and 2001, trying to find a sound, find a way of working, just never really coming up with any idea that had any impact or grabbed me at all. Having been earning money then I went and bought quite a lot of equipment and that stuff sat dormant for maybe five years. I did have a little bit of an in but I just got frustrated because I had no material." But with "Farewell To Innocence", that suddenly changed. Its haunting lyric stays with the listener after only one play: "Scandalised by strangeness/Scrutinised by fate/Vultures circle overhead/Hyenas grinning at the gate/Clouds are spilling over from other side the hill/I just don't feel so good I must have caught some kind of chill/Farewell to innocence/A time for moving on/Taken by experience/The boatman sings his mournful song."

More songs started to come and Nic began to explore the possibility of recording an album in his home studio. The critically acclaimed 'The Middle Of It All' is the result. Mystical, knowing and subversive, the album features acoustic and electric guitars, loops and soft synths and takes in influences as wide-ranging as Leonard Cohen and Massive Attack. Nic got the album out in June '04 and a couple of months later was performing the songs at Greenbelt. The audience took to the singer/songwriter's idiosyncratic fusion of acoustic and electronic elements which Nic refers to as "digi-folk". "I was so high when I left Greenbelt that night. I was driving back from Gloucester and I remember the moon came up and was just looking at me, just shinning on me. It was a clear, summer's night and I had to stop the car and get out - I was by myself . I'd actually written an interestingly obtuse song on the way to Greenbelt. On the way back I was celebrating the fact that I actually got up and did it and liked what I did. Singing is not my main gift, songwriting is probably my central gift, but I think there's a place for singer/songwriters, people who have got something to tell. I felt that I'd told my story for the first time in my life at Greenbelt."

I should be much interested in reading the lyrics of Nic's song 'Farewell to Innocence' I too was involved with Friends First. I thank you in advance. Alexandra (then Sylvia Roberts)