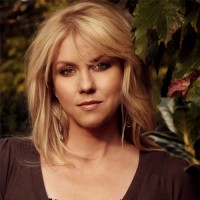 Accolades are already beginning to appear in the media for the literary debut of Nichole Nordeman, the CCM star whose best known songs such as "Why", "This Mystery", "Holy", "Legacy", "Brave" and "What If" have won her multiple Dove Awards including two for Female Vocalist Of The Year. Now her book Love Story, subtitled The Hand That Holds Us From The Garden To The Gates, published by Worthy Publishing, could well establish the singer/songwriter as a best selling author as well. In 2011 Nichole was approached to create a concept album for Zondervan's The Story campaign in which churches across America went through nearly the entire Bible in one school year. Nichole accepted and wrote 17 songs written from a first person perspective of characters in the Bible. The subsequent various artists album, called 'Music Inspired By The Story' and featuring 24 CCM artists such as Chris Tomlin, Mac Powell, Peter Furler, Leigh Nash, Amy Grant and Nichole herself, reached high into the US Christian charts. Now Nichole's book takes a song and Bible character per chapter and weaves the songs into fresh takes on familiar Bible stories.

Each chapter begins as a series of stories from Nordeman's own experiences which she weaves into the Bible stories of Abraham and Sarah, Joseph, Moses, Joshua, Ruth and Naomi, David and many more. Wrote breathecaste.christianpost.com, "Love Story exposes the humanity and more emotional underside of our most beloved biblical characters. Spanning Adam and Eve's painful choice in the garden, Abraham and Sarah's crawl through infertility, Mary's teenage journey as a young, unlikely mother, Paul's staggering encounter with Jesus on a dirt road, and the hope we cling to as we imagine His return. Nordeman does not simply offer these stories from her own perspective, but bravely weaves her own life's fumbling and failures into each chapter, leaving these iconic men and women of the Bible looking less heroic and a little more human. Her poetic observations point ultimately to the all-consuming love of God for all of us."

The singer turned writer said about her book and the Bible which inspired it, "In every story and on every page, from the garden to the gates, I encountered God's people tucking His love into their satchels, sewing it into their robes, clutching it in fear, clawing at in anger, carving it into caves, collapsing into it, rejoicing, repenting, revising and rewriting their stories because they were...we are...so perfectly loved. The Bible is the ultimate used book that's falling apart in perfect condition, much like its cast of characters. Love stories, all of them."