Nine Lashes: The eclectic Alabama rockers with an Anthem Of The Lonely 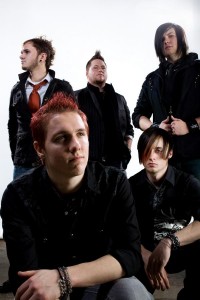 Occasionally a band emerges with a record label debut album that seems to catch everyone's imagination. Nine Lashes have arrived on the Christian music scene seemingly from nowhere - actually it was Birmingham, Alabama - with a sound that is vital and fresh. One critic eulogised, "Their music is heavy and thick, the lyrics are clever and inspiring and when combined they create a musical palette like no other." Certainly Nine Lashes' experimental rock sound on their Tooth & Nail album 'World We View' is bravely eclectic taking in everything from ambient-tinged pop to a track featuring a screamo passage from guest singer, Demon Hunter's Ryan Clark. Clearly Joe Public has taken Nine Lashes to their heart, the first single from the album "Anthem Of The Lonely" reaching number one on the Rock/Alternative Christian Chart.

Their current lineup is Jeremy Dunn (vocals), Adam 'Tank' Jefferson (guitar), Jared Lankford (bass), Noah Terrell (drums) and Jonathan Jefferson (guitar). Dunn told rock-nb.com how the band started. "Our guitar player, Tank, has been playing in music for years. You could basically say it's been Tank, with a lot of member changes. What Nine Lashes is today came together around five years ago. It was all pretty close together when we joined. The sound changed, the name changed and we really took some steps forward. It's more of an individual story than it is a we-all-came-together story, because we all have our individual joining tales. I played guitar in another band and we were all going our separate ways. When I originally joined that band, I was going to sing, but I wanted to bring a friend of mine along for the ride and he played bass. So, the band's bass player had to go somewhere, so we stuck him at vocals. The whole time though, I prayed that God would send me a band where I could lay down the instrument and focus on singing. [I said,] 'I'll chase it whole heartedly and I'll give it to you.'

"The next thing you know, the band fell apart. Not even two weeks after I prayed this, Tank gave me a call and asked if I could sub-in because their vocalist was going on a mission trip. It turned out that their vocalist was experiencing the same things that my old band was going through. He just wasn't into it very much anymore. He had just gotten married and he wanted to settle down and focus on his family, you know, that's all cool. What was really cool about it, though, was how he handled it. He said, 'I've been coming to practise because I didn't want to let you guys down and leave you hanging without a vocalist.' I thought that was really cool of him. We all talked about it and he was completely okay with stepping down and I came in and I've been subbing in ever since. So, that's my story of joining the band, but we all have individual stories. The band's name comes from the cat of nine tails that was used to beat Jesus before his crucifixion. It serves as a reminder for what he went through for us. Isaiah 53:5 says that by his stripes we are healed. He was wounded for our transgressions. He took all the punishment that was supposed to be for us. We never want to forget that, so that's what our name is, a reminder."

In 2009 Nine Lashes released an independent album 'Escape', produced by Travis Wyrick. Trying to land a booking at Alabama's prestigious Magnolia Festival Nine Lashes sent a copy to promoter Joe Posey. Joe liked the CD but wanted to know if they could deliver live. So the promoter was invited to a Nine Lashes concert. Recounted Dunn, "The funny part about that whole show was we saw the promoter leave while we were still on stage, so we literally thought he hated our set, but it turned out he left early because he had another commitment. He actually loved it so much that he sent some songs to Trevor McNevan [Thousand Foot Krutch, FM Static], who he'd known for awhile after they played the festival. Trevor probably wouldn't have had time to listen to it if his appendix hadn't ruptured and he was taking time off to recover!" 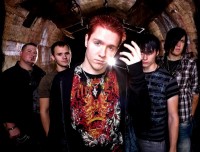 But the recouperating McNevan did get to hear the band's CD and like the promoter was impressed with the band's fresh and creative approach. McNevan recommended the band to Seattle's Tooth & Nail Records. After all the connections were firmly established, Nine Lashes found themselves in the studio alongside producer extraordinaire Aaron Sprinkle (Anberlin, Jeremy Camp) crafting the national debut long player 'World We View'. Together, the team turned in a sophisticated blend of modern, alternative and indie rock, undercut by a slew of rhythmic influences, cutting edge beats and guest appearances by Trevor McNevan and screamo legend Ryan Clark.

Speaking about 'World We View' Dunn commented, "Rock has always been our musical centering, but we definitely wanted to showcase diversity on this record since we've matured as musicians since our demo days. A song like 'Our Darkest Day' is really aggressive and features a dream collaboration with Ryan, while 'Memo' has a Red Hot Chili Peppers kind of vibe. We write what comes out naturally and never want to force anything. Aaron was awesome, giving us such a laid back and relaxed work environment. He created all the loops and electronic sounds on the album and we're very happy with it!"

The number one hit from the album is "Anthem Of The Lonely" which stayed in the charts for six months. Said Dunn, "That song is all about change, and for me, it recalls when I gave my life over to Christ. But it's an anthem for anyone to know they're not alone in whatever they're going through and that change is always right around the corner."

Equally engaging is the stirring "Afterglow", which was written after the sudden death of the father of band members Jonathan and Adam 'Tank' Jefferson from a heart attack. Adding complication to the delicate subject was the fact that all the band were present when the incident occurred. Said Dunn, "We saw everything and it was a strange event that's really hard to process. It's both an expression of that event and a tribute to their dad."

Jeremy and his fellow band members have been hugely busy zig-zagging across America, playing dozens of shows. Said the singer, "The more we travel and meet people, the more we find a lot of people with an incorrect view of God. So many people think he's an angry and vindictive God who wants to punish them for everything, but the world we view is one where we draw close to God and strive to make his point of view our point of view. When we start to see the world the way God sees it, our vision won't be blurred anymore."

I LOVE THIS BAND!!! and I LOVE the Positive message that the band has :) keep up the good work LOve ya'll!!!!!