Replacing anger with passion in hardcore music is the mission of Atlanta, Georgia's NORMA JEAN. Justin Style spoke to the band. 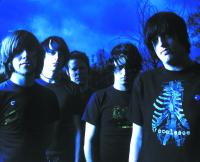 Hardcore band and Solid State recording artists Norma Jean made a surprise visit to the UK in May. This was the band's second visit to our shores, but the first since their 2002 name change (they were formerly known as Luti-Kriss) and the departure and subsequent replacement of vocalist Josh Scogin and bassist Joshua Dolittle. This time round Norma Jean were supported by an ever growing underground fan base who have come to respect the band's uncompromising take on hardcore. "It's been amazing, definitely better than we hoped for," enthused drummer Daniel Davison.

With the release of their Solid State album, 'Bless The Martyrs And Kiss The Child' Davison feels they have managed to capture the energy of the band's intense live performances. "We recorded it live, the vocals and everything, we all just played at once. It definitely caught our live sound way better. I think it's more technical and we were more focused." The band will be glad to kill off the memories of their Luti-Kriss debut, 'Throwing Myself', which found them trying too hard to capture the nu-metal sound. "On the first CD, the guys that recorded it did it their way. We didn't really have much say in it. On the new one, the guy that recorded it was really cool and into our ideas, he let us do what we wanted."

This freedom to experiment is apparent, as they show a complete lack of respect for the unwritten laws of the genre. I can't help feeling that this album should come with a health warning - "Listening to this band may result in hearing difficulties." Yes, it's loud, and I'm not talking about nagging parents loud either.

Norma Jean like to try and do everything differently whether it be their ridiculously long song titles such as "Pretty Soon I Don't Know When But Something's Going To Happen" or they're overly metaphor-laden lyrics. As Daniel puts it, "It has to be creative and not just generic hardcore music. I prefer it when there's more emotion behind it." The band's new vocalist Brad Norris has been dubbed hardcore's 'Elvis', and it's easy to see why as he swings about on stage. The vocal tones jump from screaming highs, to growling lows, all over the place, but always in your face.

The group started off in Atlanta, Georgia, in 1997 as a high school garage band. "When we started none of us were even Christians," admitted Daniel. Founding band members Scottie and Daniel attended a church youth meeting with some school friends and their lives and the band's direction were forever changed. Said Daniel, "We were introduced to God, we just totally felt that that was what we were supposed to do, like God was drawing us into a relationship with him." The following week the remaining members attended church and had the same experience. As they grew as Christians they discovered Christian music. "We figured that as we were all Christians that we ought to be a Christian band," continued Daniel.

Norma Jean is one of many Christian bands finding success reaching secular audiences. Commented Daniel, "Now we're playing to mainly non-Christian audiences. We don't wanna say stuff that will turn them away, but at the same time we wanna do what God wants us to do, no matter what." Although they play mainly mainstream dates these days, they have still remained firm in their beliefs and agenda. "It's the reason we do this band. We wanna try our best to live for God and let that come out through our music." Although the lyrics are not instantly recognisable, they do make obvious references to their beliefs. Songs such as "Shotgun Message" with the lyrics, "I did this for you, not your religion" are an example of the band's unique delivery of the Gospel.

Believers hardcore is a scene booming at present with a high representation of Christian acts at notorious secular festivals such as Hess and Hell Fest. Cynics have argued that to be a Christian hardcore act is an oxymoron. Songwriter Josh doesn't agree. "The confusion comes with the idea that when you're hardcore you have to be angry and that's not true. We're a very passionate band but we're not the least bit angry, and there's nothing to be angry about. When people say that hardcore bands can't be Christian bands, I think that you just have to open your mind and realise that you can be passionate and not angry."

i can name something bad about christian music. its only out there to make the church money when all is said and done , it is the highest grossing music genre worldwide. same goes for christianity itself. biggest bunch of fakes and scammers on earth. look at christian childrens fund..37 cents of every dollar is all anyone in africa ever sees, and that isnt the children either..it is the defective governments in power. trust me , i worked for them. to believe in a supernatural being no matter who or what it may be, constitutes some level of insanity. why cant you christians just be good people without threats of the scary monster under the ground that takes you when you die if youre bad?

why does Josh say, "I think that you just have to open your mind and realise that you can be passionate and not angry?"

why does one always have to "open their mind"? what if they're mind is already open but they're just not down with passion?

anyways...i think norma jean is awesome. but you can be angry and passionate...it all depends on what ur writing about for a particular song.

there is something called God-smuggling, and thats just what they do. if they were very open about their faith, they would likely lose some of the audience they are trying to reach. and many non believers attend Christian festivals and concerts if Norma Jean is performing, and end up getting saved after they, for some odd reason, (actually, its God telling them they need Jesus) have a strange desire to stay and listen to a speaker later on that day.

keep the music hitting the worldly ppl out there. good seed has been planted.
we need bands like you in South africa.

Jesus Said for us christians to be the salt of the earth. I Love Norma Jean Their practically my Favorite band, but its so hard to tell if they are christian or not
I mean yeah know they are christian and all but i dont think they are doin the best job communicating Christianity Their "good news" is so vague and subtle

and what would that be? the fact that my creator loves me and when i die im gonna go be with him for eternity is something more than to be passionate about :). you rock nj!!

Look. A word of advice to Norma Jean if you read this. Keep it up. Walk the steps and follow the path the Lord wants you to. Let Him take you. Follow Him as Abraham did. God Bless. You guys rock.

These guys are very talented, especially with their (I think it's unreleased) song, ShaunLuu. The lyrics, though, are kind of confusing as to what they mean. Oh well, the music is still extremely entertaining!

omg.. i was devastated to find out that these guys were christian metal.. haha, so very sad.. although i agree that hardcore doesn't have to be "angry" it can be "passionate".. although christian passionate is definately a waste ;) I can think of some more important things to be passionate about..

It's really sad that people don't think that being passionate about Jesus is a great thing. Notice nobody could come up with any specific things that were "more interesting". Well, I have two kids and I don't really enjoy this type of music but one of them does, so here I am...loving it with him because of the words it speaks, the message it gives, not just because it's loud and dark. If you're going to argue against Christian music, show how it's BAD and then we'll talk... until then, we will just keep on praying for you. God Bless.

view older comments
The opinions expressed in the Reader Comments are not necessarily those held by Cross Rhythms.