Albums by Georgia's hardcore band Norma Jean are more likely to be purchased from the metal section of HMV rather than from most Christian music stores. Yet despite their mainstream following reflected by enthusiastic reviews in mags like Kerrang!, Norma Jean are still renowned for their in-your-face Christian beliefs. Typical are the comments drummer Daniel Davison made to HM magazine in April 2005, "As far as our goals: my main goal and us as individuals, like, I hope is to please God and to serve God with our lives and our lives to be worship to God. That's us as individuals, so if that's true, then that's going to shine through in the band and also be true of the band. We just wanna, first and foremost, just please God and commit everything we have and we do to him. As long as that happens, I'll be happy. Even if we never tour again, if we're pleasing God, then that's fine with me. I would like to see this continue on for more years to come and more records and more tours, more good times and more ministry going forth and stuff. I really can't say that I have any goals, as far as physical things that I would like to see us do. Not that we, like, don't care and don't have things that we want to accomplish, but I try not to think about that kind of stuff that much, but just kinda take it as it comes, you know? (That way) it's all new to me and it's always exciting instead of me, like, trying to think, 'What can we do?' Not that goals are a bad thing, because they're for sure not a bad thing, but (I) just try to take it slow and not even really think about it that much."

The end of 2006 saw the release of Norma Jean's latest album 'The Redeemer'. It impressed the Cross Rhythms reviewer who after saying that it had "the subtlety of a sledge hammer" and contained "brutal, crushing guitar riffs", it had "more melody" and even "proper singing" than on previous releases. The album is the result of the group working with well known producer Ross Robinson. "That's something that most of us in the band dreamed about," said Daniel to Cross Rhythms broadcaster Greg Sammons. "He would definitely be the top choice if we could pick anybody. He heard of us through different people and ended up coming out to see us a couple of times. He missed us the first two times he came to see us on tour but we would still hang out and meet. He was really inspiring and a really neat guy to talk to and ended up seeing us at a show in LA about two years ago now, or may be a year ago. We didn't even know he was going to be there. After we played we came off stage and he was standing there. He told us he was basically blown away by the show and that was our last show before starting to write for the new record. So he basically told us, 'All you have to do now is write an amazing record,' and that he was on board. He was going to record it for us. It was really encouraging and inspired us. We talked to him for five minutes and then he left and that was it. A couple of months later he flew out to Atlanta and did pre-production with us. We couldn't have got anyone better."

Talking about the opening track "A Grand Scene For A Colour Film" Daniel said, "It's funny because we went back and forth trying to figure out what the first song of the record was going to be. One of the guys suggested from the very beginning we use that one as the first track but we said, 'No that shouldn't be the first one.' We went around with our own thoughts and ideas but then in the end came back and he was right. That one was the best for the first track. It definitely is a good one. It gives an over all feel what the record is going to be about musically, lyrically and vocally because it touches on every element of the record, not just the melody and the song but also just some craziness and noisy parts and stuff like that. Everywhere that we touch on the record is summed up in that song. It's kind of cool."

The track "Song Sam" exemplifies the Norma Jean depth buried in their screeching, banging music, as Daniel explains. "The song is actually about depression and fighting depression inside yourself and how there is hope if you're in that situation. It's not the end of the world although it does seem like that."

Lyrically Norma Jean didn't set out with an overall theme for 'Redeemer'. Said Daniel, "It just goes in five different directions - so there's not really like an essential theme that can be summed up in one concept." But it has come together as some of their most expressive work. "It's probably one of the most personal records we have ever done. There are just a lot of personal lyrics. I think that's one big aspect of working with the producer Ross Robinson, playing a big part in creating that really personal feel and that emotional side - connecting us and the record." 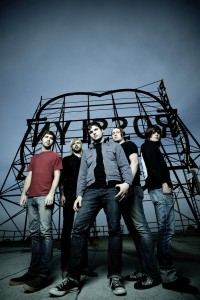 Daniel admitted that 'The Redeemer' toned down on the chaos and introduced more melody to the proceedings than previous albums. He said, "'The Redeemer' just brought more groove and a little more simple feel and structure to the songs. We did not feel that we had to go chaotic on this record. But I think the songwriting has definitely progressed and the originality has progressed as well."

Their partnership with Ross on this album and the band's growing reputation might suggest that they, along with Underoath, have outgrown Solid State Records. Said Daniel, "We would (move to a bigger label) given the right situation and the right timing. But the label has probably grown with those bands and grown on its own so it has all the perks you would get from being on a major label. Solid State has great distribution, great funding and everything like that and we still have a great relationship with them. We are happy where we are for now, for sure."

In the future Daniel assures that we can expect to see further tuneful development in the Norma Jean sound but not without sticking to their hardcore craziness and gospel words. "We are definitely going to progress. Hopefully that is our goal, that with each record we'll take a step up and do something totally different - something that we feel isn't being done all over the place. Also to out do ourselves as it were - to make it more interesting for us too, because we are the ones on stage playing these shows, playing the songs every night - so we want to do something that's fun and exciting, not the same thing over and over. With this last record we brought in more melody and stuff like that and what could be fully discordant, we will bring in melody to it. I figure you need to blend - not many bands have done blending as we have done it. We did it in a more subtle way that was planned really heavy and then just cut to a clean shell and made something pretty. It's really more embryonic."