What would make a fully qualified doctor or medicine leave her profession to go into the uncertain world of music? Tony Cummings spoke to NOTE FOR A CHILD to find out. 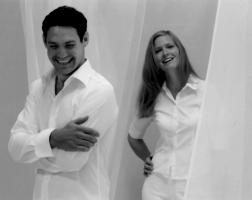 Seldom, if ever, have a new act been greeted with such no-holds barred enthusiasm from the Cross Rhythms team as the first recorded effort of Cambridge's Note For A Child. Here was an act, Susie Beattie (vocals and keyboards) and Daniel Goodman (vocals, guitars, drums and programming), who were contributing something appealingly fresh with haunting world music-tinged rhythms and gentle enveloping grooves behind ethereal vocals and subtle poetic imagery. Despite faint echoes of everyone from Peter Gabriel, Bjork, Daniel Lanois and Suzanne Vega, Note For A Child had still achieved something that was definitely their own. Their 'Impossibly Beautiful' album is unquestionably one of the finest releases of the year.

Susie, a Cambridge-trained doctor, formerly headed a five-piece band, Chimera, as singer/songwriter, producing two independent albums between '97 and 2000 to positive reviews. The band performed at Greenbelt, the Cambridge Folk Festival and regular local venues, in addition to supporting Delirious? on the Cambridge leg of their tour. Daniel was born and raised in Guinea Bissau and Senegal, West Africa, where he was saturated with the sounds and rhythms of those countries, complimenting the strong European and American musical influences from his parents (Daniel's father, Tony Goodman, used to be the frontman for pioneering Jesus rock band Out Of Darkness). A graphic designer by training, he was written prolifically and a number of his songs have been recorded live in Bournemouth on two albums - 'Simply Said' and 'Shelter'. He is a highly experienced performer. Daniel is responsible for all the artwork and design involved in the band's promotion.

The pair started writing together informally in the summer of 2002, when Daniel moved from Bournemouth. It was immediately apparent that they could write and produce songs together that were tangibly different from anything they had done before... beautiful, layered, intriguing. Note For A Child was born in January '03 when Susie stopped GP-ing to concentrate on the music.

Susie admits that moving from medicine to music wasn't easy. "I think I've learned over the last couple of years we have to find out what God is asking us to do, day by day, week by week, month by month. For me I think I had 10 years of hospital medicine and training and a lot of my peers were saying, 'You can't leave general practice because it's so well paid and so secure.' I knew God was calling me to something else and we just need to be obedient. He is there with us whatever we do, if we listen to his voice and obey it then we prosper in ourselves. Although I grew up with a science background the artist in me was always there and now he has brought me into a place where that is really coming out. When you do medicine, because it's such a 'full on' job and you are with people all the time, you can get to the end of the day and think, 'Okay, there are 25 people I have seen today that I have done my very best for and hopefully they have left with a bit of goodness from me.' Stepping aside from that, which initially felt self-indulgent, I wondered would what I expressed touch anyone else? It felt quite a risky thing and so I had to ask God for specific direction. I left it for about a month. Daniel was very good and just stood quietly and wasn't saying just give up medicine, but I had to know from God and he spoke very clearly to me through various things. All the way through, even in my medical training when I could have done various jobs, my motivation was to serve and look after people. I've never really had the desire for success in medicine and so the desire for success in something has just been to look after the needy person. I found that our writing was actually expressing and addressing that and that was very helpful. But that didn't come until after I had made the decision." 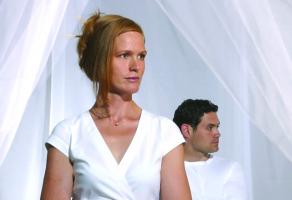 Daniel spoke about the unusual influences that inspired Note For A Child. "I grew up in West Africa because my folks were missionaries, so that is going to give me a different perspective. Susie had a very English country lass upbringing. So we are coming from different places with lots of different influences and lots of different inspirations, but with a fundamental relationship with God at the bottom of it, which somehow comes out through everything we do in terms of wanting to have a really high production standard or just in terms of how we feel about something. So I think he's always there even though we've not tried to write songs that are necessarily gospel based or worshipful, they just happen to be like that."

Daniel has some interesting views on the never-ending Arts vs Ministry debate. "I think the whole notion of using the gifts which God has given you for a purpose that he's ordained is fantastic and we both serve as worship leaders at our local church. But I also believe in art for art's sake and art to glorify God is a fascinating thing. We try to be really careful not to use the brand 'Christian music' as a way to promote ourselves or our platform as worship leaders to manipulate people into buying our music. I think it's really important artists work really hard to make their piece of work everything that they want it to be and then give people the space to respond to it. You don't make them feel they need to be impressed by this because it's Christian or it isn't Christian. We've tried really hard to make it a neutral playing field where the music is at a really high standard and if people love it then that's great!"

I'm trying to get an email address for Daniel Goodman. I published IMPOSSIBLY BEAUTIFUL and I just secured a cut by Gloria Loring (Robin Thicke's mom) We would like him and Susie to get a copy and I need a current address.

Susie Beattie is my mother. So proud! Yeah... :D

Hi- I'm singing impossibly beautiful at a charity concert for Nepal on Saturday & want to credit to writer/s- is it Susie Beattie both lyrics & music? Kind regards, Beth