One Bad Pig: Not thrash, not speed, but serious noise with a message

When he heard a report spinning round the Chinese Whisper gallery of Greenbelt that ONE BAD PIG had disbanded it was enough to get Tony Cummings on the phone to Austin, Texas. Fans of the Pig can rest easy... The Pig liveth. 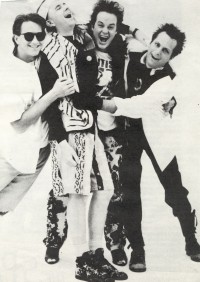 From 'Take A Look At Yourself on 'I Scream Sunday'.

On the first track on their new album One Bad Pig don't just bite the hand that feeds them, they tear it off and spit the severed appendage onto the Dove Awards' table. Any thought that the conservative, unit-shifting accountants of America's CCM industry could stay safe and smug yet street cred radical by having their own torn T-shirt piglets to jump through the hoops of commerce come unstuck with One Bad Pig. But Pig's guitarist Paul Q-Pek isn't taking cheap shots.

"We're not trying to point a finger at anybody on 'Take A Look At Yourself. It's about the reality that we're all sinners and this sin has a habit of touching all of us. There are things about the Christian subculture we're very unhappy about, but then there are things in our own lives which we've got to straighten out. Plus of course, money is the bottom line of the record industry and that includes much of the Christian music business and the band find itself smack dab in the middle of it. So it's time for a certain self-examination."

Has this time of self-examination led to the rumours that the band have split up? 'I don't know how those rumours started. The truth is we've taken six months off from touring to have babies... with the assistance of our wives. Carey (lead vocalist Carey 'Kosher' Womack) has had his - a girl, and Phil (drummer Philip Owens) will be having his in January. After that it's back on the road. We've got more concerts scheduled and we've got a live album coming out which we recorded at the Cornerstone Festival in Chicago called 'Blow The House Down'."

Cross Rhythms asked Paul whether it was difficult to get the exceedingly unlikely figure of ancient country music wrinkly Johnny Cash to sing on 'I Scream Sunday'.

"No, actually it wasn't difficult. We wanted to do Johnny's 'Man In Black' and Myrrh's A&R guy Mark Maxwell had the idea of asking him to sing on the track. So we made some calls. They asked us to send them a tape and some write-ups. We thought 'Once they hear the music we'll have no chance!' But then the word came back that Johnny had read the stuff we sent and said 'I want to be on their record.' What really impressed him was that we were what he called 'a gospel band'. Also he had a son who's 21 and who's really into metal. So Johnny came into the studio the last day of the sessions. It was a blast Johnny doing his song. Johnny is an OLD guy. But he really seemed to get into it. We had a chance to talk with him and pray with him. He was just great. When the record came out some people thought we'd sampled Johnny or used a Johnny Cash imitator. But it was the real Man In Black in person on 'I Scream Sunday'."

One Bad Pig have travelled a long and often bizarre road as the CCM world's purveyors of hardcore rock. The band's lead singer Kosher commented on the band's style to US fanzine editor Doug Van Pelt: "We're not so much thrash or speed. We don't have a bunch of songs where we constantly work on seeing how fast we can do it, trimming time off its performance or anything like that. We've got a lot of fast songs, but our purpose has never been 'let's see how fast we can play this time', or 'let's see how many words we can cram into the shortest amount of time'. It's never been a goal or a vision of the band. The vision of the band is to communicate through thrashy, somewhat creative, somewhat different music, the message of Jesus."

"One of the main reasons that we chose thrash music,' says Paul, "besides the name of the band - which was chosen before the band got together, which kind of lent itself to a thrash type of sound -was our lead singer, Kosher, who was in essence not really a singer at all. The best genre for his type of voice was thrash. I mean, you take the lead singer of Vengeance, Roger. I just can't see him doing a duet with Michael W. Smith, although it would be interesting. Obviously, his voice is more suited to speed-metal thrash, punk, whatever you want to call it. So, that's one of the reasons, because of Kosher's voice." The band started in 1985. Paul Q-Pek and Carey 'Kosher' Womack being there at the moshing, anarchic start along with Kevin Phelin (bass) and after a couple of gigs, Jon Taylor (drums). The band formed in 1986 played churches, youth clubs and hardcore secular gigs in the Houston/Austen area. After being asked to play the Cornerstone Festival the band made a private 6-song record and tape, 'A Christian Banned'. After the recording Jon Taylor and Kevin Phelin moved on to be replaced by Mike Connell (drums) and Streak Wheeler (bass).

In America's 'Heaven's Metal' magazine Paul Q-Pek reminisced about the band's early days. "We had been together seven or eight months, playing some clubs in Austin...and there was a local hardcore label in Austin called 'Rabind Cat Records'. They had distribution all over the world. They had groups like The Offenders, The Butt**** Surfers, Poison 13, all these bands.

"Out of the Lord throwing some people in our path, we were able to record that 'Christian Banned' project, which wasn't intended to go on vinyl. It was just like a demo tape, which was done in a 24-track studio. It was all done live, with no overdubs on the guitar. I played the lead and the rhythm all in the same pass. It's a very, very garage-type sound. "We had lunch with the two people who were the heads of the label and played 'em the stuff, and they got back to us and said they love the music. They said it was some of the best and most interesting music they'd heard in years. These were people who were directly involved with the hardcore scene...but they said, 'The lyrics...We know you're a Christian band and everything, but the lyrics, we just can't have that on our label. We have investors in the label and we don't want to ruffle any feathers."

Later that Fall, a guy with another hardcore label - Unclean Records - had heard about us in town. He said, 'Let's do it. I'm ready to sign you guys and put out your stuff. I've got distribution through Alternative Tentacles in San Francisco, which distributes Black Flag and The Dead Kennedys. You'll be all over the world.'

"This guy was not a Christian, but he really was intrigued by what we were doing. So, we really took this as God just really opening up the door. We went for it and told the guy, 'Let's do it.' He said he had to check just one thing. He needed to check with his distributor, who was basically this girl in San Francisco. She was the head of distributing just tons of punk bands. He sent her the 'Christian Banned' album. When she heard it she was offended. Again, the offense of the Gospel...She loved the music but said 'Man, there's no way. I refuse to distribute this product, this band.' "It would be okay if we used the F-word every other word...she'd love it. But because we were talking about Truth and the Gospel, something that really mattered, she refused. The guy form Unclean said, I'm really sorry. Without distribution, the album will not happen. I'm totally behind you guys, but I just can't sign you without the distributor's okay.'

"So, again we were running into walls because of the Gospel, which is a good thing. It's better to have the Gospel up front and run into walls. At least you know that you're not compromising the Word of God. The Lord definitely had some other things planned for us. God really expanded our vision by allowing a lot of Christian people to get into our music also. By playing for Christians, and them inviting their unsaved friends to the concert, we were able to fill a lot of needs. We fill the void for Christians who really love radical music, but have no way of praising God with it, because there wasn't anything out there that was their style. We're filling the void for them and encouraging them and also really confronting the non-believers with the Gospel in a style they could understand."

this bad is amazing‼