One Voice: Black and white worshippers unite in a revolutionary album 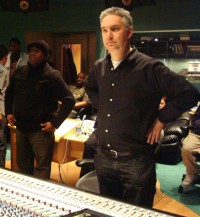 The release on 4th September of the various artists album 'One Voice' did more, much more, than put into the CD racks 12 honey-sweet praise and worship songs sung by such luminaries as Tim Hughes, Kierra Sheard, Erica Campbell (Mary Mary), Matt Redman, Israel Houghton, Darlene Zschech, Rance Allen, Martin Smith, Smokie Norful and many more. It threw down a gauntlet to the worldwide Christian community to do something about the racial divisions that for too long have besmirched the Church. Said executive producer Lawrence Johnson, "I think we would be unrealistic to say one album could break the cultural barriers, but I think it is a step in the right direction." Les Moir, another of the album's executive producers and head of A&R at Kingsway Records, added, "There is an excellent quote from a book written by Philip Mohabir, first printed in 1998. He wrote, 'Like the mustard seed in the parable, the black churches in the UK have grown into a significant force of evangelical Christians with a spontaneity and vibrancy and dynamism which the white constituency need. Evangelical Christians need to imagine what power for good we could be in the hand of God if both communities could combine their resources and provide a prophetic witness to a nation that is in desperate need.' Our prayer is this album will be a prophetic witness. We are very proud of this album and are trusting God to use it to connect the cultures, so we can hear the sound of the nations worshipping together - a taste of Heaven on earth."

To discover the genesis of the 'One Voice' project one has to go back to one of the worst natural disasters of modern times, the tsunami which struck Asia on Boxing Day, 2004. Watching horrified as the world's TV media began to show the enormity of the disaster was veteran gospel man, co-founder of the London Community Gospel Choir and R&B crossover group Nu Colours, Lawrence Johnson. "For the first time I felt challenged: what was I - and what were other Christians - going to do about it?" remembered Lawrence. The answer was not slow in coming. Before long he was on the phone to Les Moir, wondering out loud if it might just be possible to get a few people from the gospel and Christian music scenes together to explore the idea of making a charity record. "An hour later Les called me back. He'd booked Abbey Road studios. It all kicked off from there."

That day in Abbey Road turned out to be even more significant than any could have guessed, as Les Moir explained. "There was one moment on that day when all 150 artists were in the same room and we realised that we had touched something. There was this sense of these two tribes really coming together. Lawrence and I were looking at each other and we knew that we needed to carry it on."

Jointly written by Mark Beswick and Tim Hughes, the single "One Voice, One Heart", featuring a startling representation of British black and white singing talent, was released. Through sales the track generated Â£30,000 which helped rebuild the fishing village of Thantri, south India. But the One Voice story didn't end there. Les Moir took up the story. "When Lawrence and I were recording the 'One Voice, One Heart' song we realised that apart from it sounding so good, God had used it to bring our music communities together, even if it was for just a day in Abbey Road studios. We felt that we had to carry this on and with the support of John Paculabo at Kingsway, we started to hold One Voice days. We did a few in London as well as one in Birmingham. We then started talking about recording an album. The first couple of years were spent planning the best way to make the album, finding and meeting with the right producers. We also met with Ken Pennell, who heads up EMI Gospel in Nashville. Ken was a great encouragement and has a heart for the nations and became part of the executive production team, bringing Kierra Sheard, Smokie Norful and El Trio De Hoy to the project. We started organising the songwriting sessions. We brought over Israel Houghton to write with Matt Redman and Noel Robinson, as well as Warryn and Erica Campbell (Mary, Mary) to write with Nu Colours and Mal Pope. Smokie Norful wrote with Tim Hughes and Mark Beswick. As with the single we wanted the collaborations to start from the foundation of the songwriting. Tommy Sims also wrote with Tre Sheppard." 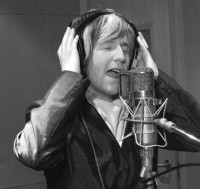 Les continued, "We must have listened to about 100 songs. . . These are the 12 that made it. Our first recording session was at Olympic Studios in October 2007 with Tommy Sims producing 'Let It Be' (vocals by Faye Simpson of Nu Colours and Stax Records legend Rance Allen)." Lawrence picked up the story. "We met with Tommy in Nashville and fell in love with the 'Let It Be' track. I said, 'I know the guy and girl I would like to record this.' I have been a massive fan of Rance Allen, who has influenced so many gospel artists - Marvin Winans, Tye Tribbett, Kirk Franklin to name a few. And one of my favourite female singers in this country is Faye, who is without doubt an amazing singer. She was so nervous to sing with Rance, but man, she delivered!"

Another track featuring the soulful voice of Faye Simpson was "All Over The World", sung by Nu Colours. Said Lawrence, "It was not difficult at all to get Nu Colours to re-form. When we all arrived at the studio it was like we hadn't been away. I would dare to say we are better now than we were before."

In the middle of recording tracks for 'One Voice' the project was delayed when Les Moir received a phone call from the frontman of Delirious?. Remembered Les, "I had a phone call from Martin Smith asking me to help him make the CompassionArt album. I discussed this with Lawrence and we agreed I should do that. So we put back the One Voice project for a year. Lawrence has also been working on other projects too and became the worship director at the New Wine Church in London. For myself, I worked on Tim Hughes' Live DVD and album from Shepherds Bush Empire."

Throughout, the project was an expression of black and white artists and songwriters working in unity together. One example of this was a rendition of the song "Awesome Wonder", written by Roger and Sam Grandison, which has been described as "the 'Here I Am To Worship' of the UK black majority churches." Said Les, "We gave that one to Darlene Zschech and Ian Pitter to sing. Singers were recording their vocals around the world and emailing them to us. Darlene recorded her vocal in Australia." 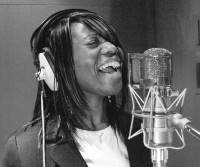 Tying up songs with an international array of artists and studios was a hugely intricate process. But bit by bit 'One Voice' took shape. Enthused Les, "Kierra was working with Warryn on her album and so was able to record her vocal. We used ICC Studios in Eastbourne and the Premises and Wave studios in London for other parts. Brenton Brown recorded his vocal in Malibu, El Trio De Hoy in Miami. It was amazing to see it all come together. A highlight for me was hearing Erica Campbell from Mary Mary singing with Lou Fellingham. The combination really works. Lawrence had been working with Wayne Hector, who wrote quite a few of the Westlife number one hits. He brought us the song 'Anywhere'."

Lawrence vividly remembers recording the vocal for "Anywhere". He said, "Myself and Nicky Brown went to Chicago to record Smokie Norful and Nicky told me to go and check the mic before Smokie arrived. I told him, 'Make sure that if Smokie is in the building you let me know!' If you know how good a singer Smokie is then you would understand why I said that. Anyway, Smokie came into the studio to hear me singing the same song he was going to record! I was not amused!"

As the recordings began to fall into place Moir and Johnson recognised the project was missing a song about social justice. Said Les, "Noel Robinson and Israel Houghton wrote 'Somebody Please'. Israel recorded such an incredible guide vocal that we kept it for the album." More memories poured out from the Kingsway Music executive. "Lawrence and I had often talked about recording a track, just with male vocals. Garth Lawrence had the chorus to 'Shine On'. Israel Houghton heard it, took it home and wrote the verse and bridge with Aaron Lindsey. It was great to see Martin Smith and David Ruis stepping up to the mic on this one as well as Muyiwa adding his African dialect."

Now that the album is finally out and in the Christian bookshops Les is thrilled with the result. . . and its potential to do good. "A healthy royalty from sales of the album is going to Ray Of Hope, who are doing a great work with the children in the Amazon. We wanted to keep the social justice heart of the 'One Voice, One Heart' single as well as increase the quality of the recording."

In a Christian music industry that helps perpetuate the black and white divide through its gospel and CCM categories, Johnson is candid about how "the biz" will accept such a revolutionary album as 'One Voice'. He stated, "People ask me what slot this fits into, but I really don't have a clue. People ask me and I just ask them to have a listen and then tell me where they think it fits. But I do know this: I hope that it will strengthen the community and connect the cultures, not reinforce our ideas about how different we are."

Les Moir had the final word: "Back in 1997 at the Dove Awards in Nashville Kirk Franklin was on stage and at the end of his song shouted out, 'No more black music. . . No more white music. . . Only God's music!' This seriously impacted me. Also in Revelation 5 we have the picture of every tribe, tongue and nation worshipping together. We would like to see this happening more on earth as it is in Heaven. The multi-cultural model is definitely on God's Kingdom agenda. As more churches become more multi-cultural we are going to see a bending and blending of the genres and styles. So we are hoping this album will help draw the Church in this direction."