Only Won: Surely the world's only bi-lingual Chinese gospel rapper 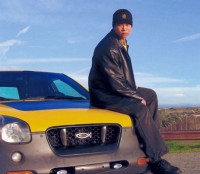 The intro track to the 'Glory' CD by Los Angeles-based Christian rapper Only Won could not be more attention grabbing. It's a short burst of acapella rapping. So what's so unusual about that? Well, "Intro" is rapped in Cantonese. For it seems Only Won, real name Baldwin Chiu, is America's only bi-lingual Chinese gospel rapper. Not only that, this larger than life figure is a black belt in martial arts, a professional actor and a fully licenced mechanical engineer! On Cross Rhythms' Rimmerama radio programme Only Won/Baldwin explained how he became a Christian. "I was born in San Francisco and had the luxury of being raised in a Christian home, so my parents were really good about keeping me in church, taking me to youth groups and all that. Then in college I went through some trials; I went through a time when I was really hurt by some key people in the church and it made me really question my faith. It was during that time that I went on this journey of discovery to really find out who God is, if there is a God, and if so why does he allow pain and suffering. Being a martial artist, I looked at the eastern arts, Buddhism, Taoism and studied some of the other faiths. As a scientist (I'm also an engineer by day) I studied evolution. What I found during my studies was that nothing else provided me with hope. Even though I was so hurt within my Christian faith, at least God gave me hope to get out of that hurt. I was listening to secular music because Christian music was something I didn't really care about any more. But the more I listened to that mainstream stuff the more I felt discouraged. So around '97 or '98 I went back to listening to Christian music and it started to lift me back up. I started to focus more on how to use that hope I had in Christ and really build up my foundation as a Christian. It really solidified my faith."

The 'Glory' EP is actually Baldwin's return to the hip-hop scene. He went to the same school as early '90s gospel hip-hop pioneers J.C. And The Boyz and one of the Boyz, R&B/dance singer Maximillian (one-time member of JC Crew) is the producer of 'Glory'. Only Won's rapping really took off five years ago. He explained, "It really began when radio stations were calling me and when I promoted a show I brought a bunch of artists in and I rapped a little bit in 'Chianglish'. The producers of the radio stations said 'you know maybe you should start doing it again.'"

Alongside his successful engineering business Baldwin has also had some success acting. He explained, "I'm with the Screen Actors' Guild doing commercials and films. The most recent movie was with Will Smith in The Pursuit Of Happiness. I got to compete against him a little bit in the movie; he's a great guy, by the way. That was me in the front row, and we were passing the books, listening to lecturers, making phone calls, all trying to land the job with the big stock brokers."

After a positive response to the 'Glory' EP, Only Won is now working on a full length album to be called 'The Lyrical Engineer'. This engineer, actor, martial arts instructor and rapper has a clear focus as to why he's making with the rhymes. "I'm just trying to reach out to the youth - just to use the entertainment in the street. I'm trying to use myself as an actor, as a hip-hop artist, and even as a martial arts instructor. I like to try and use it all in the entertainment industry, to spread the Gospel and let the young generation know that being a Christian is exciting and that the faith we have brings life to all of us."

So Glad You Found A Positive Way to Reach The Youth.
Great Album next time can you Sign it so people believe
I Actually Work with You.

Can I be on the next Album.

Thanks for the great article. What a surprise when someone emailed me the link.

thanks for the great article on my favorite rapper. i appreciate you celebrating diversity