Out Of The Ashes: The gospel, pop, bluegrass, Latin, African, jazz eclectics 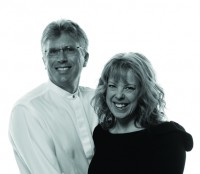 Out Of The Ashes

Penny Lyon and Kevin Washburn, otherwise known as Out Of The Ashes, are a distinctly unusual duo. For a start, though their roots are in gospel music neither Penny nor Kevin are black. Secondly, their debut album 'The Garden', produced by Sound Consultancy, the team responsible for such acts as Philippa Hanna and Daughters Of Davis, is a head-spinning cornucopia of musical eclecticism, taking in country, pop, African, Latin and jazz as well as their soul gospel foundation. Cross Rhythms quizzed Penny to get their story. Said Penny, "I have always had a relationship with God, even though I was growing up in a family where Church of England was seen as more of a nationality than a declaration of faith; I had a real sense of God caring for me from very early on in life. This was cemented as a teenager when I started going to a new church and to go more regularly and I was ultimately baptised when I was 18. Kevin grew up in a Methodist Church family, his father played organ in the church. Kevin feels that he moved away from his Christian learning when he grew up and started work, but felt he was 'called back' when he met me."

Kevin and Penny's musical roots go back a long way. Explained Penny, "Kevin and I have been married for nearly sixteen years and we have been performing live music together for most of that time in one way or another. When Kevin and I first moved to the beautiful Cotswolds we became involved with a local C of E Church early on. It is a small church that made us feel welcome and loved very quickly, but I was really missing the lively worship I had experienced in some of the previous churches I had attended. It gradually became apparent that I was not the only one in the congregation who felt this way, and not only that, but there were quite a few good singers. We had a chat with the curate and asked if she would support us if we tried to get a choir started, and away we went. The choir (now the Beacon Gospel Choir) is structured to be as inclusive as possible; it is our belief that God gave us voices to sing because of the joy singing gives us, the joy that He feels when we sing to him, and because, like prayer, it is an essential factor in the cementing of our relationship with Him. Therefore, in line with our belief that everyone that can talk can sing (and I mean EVERYONE), we do not audition, we just take extra time to work with those that are struggling, to help them find their voice. We now have an excellent band (although we're looking for a new pianist at the moment. . . anyone able to help?), and we sing wherever we are invited. This is mainly in other churches. . . and always to give worship a wider voice."

In 2010 Out Of The Ashes began writing for what was to be their debut album. Said Penny, "While both of us have had a history of writing music in our pasts, we just didn't seem to be able to get it together for writing songs as a duo until two years ago when God seems to have flicked a switch, and away we went. We really weren't expecting to record any of the songs ourselves until we met Andy Baker from Sound Consultancy. His suggestion that it was the way ahead came as a surprise to us. The name came last!"

Penny spoke about the songwriting process. "Kevin is prolific in coming up with music for me to put lyrics to. . . sometimes exhaustingly so! I, I'm afraid, am a bit slower. Inspiration comes from absolutely everywhere, and music that we like comes in many forms. Hence the styles are varied, but include soul, jazz, new world and a bit of blues among other influences. Harmonies creep in a lot because of my love of vocals. Perhaps you could say The Carpenters with a little more bite." 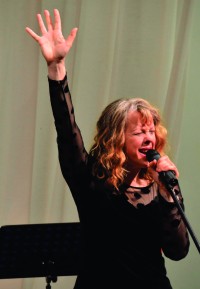 There is a strong autobiographical quality in the songs on 'The Garden'. Admitted Penny, "It would be fair to say that the music you hear from us charts the ups and downs of our spiritual life, both what we have to say to him and what we receive from him in answer to prayer; from the highs of praise that can sometimes come from something as simple as living in the beautiful environment that we do, and from the joys that the Lord loves to bring us, to the lows that will always be there in everyone's life and can leave us either asking God for help, or asking a bereft 'why?'."

Penny spoke about some of the songs on 'The Garden', starting with the title track. "I've heard it said that when women buy perfume, they are not buying a nice smell, they are buying hope. I find this so profound; we are buying hope that we will be more beautiful, more complete and perhaps, ultimately, more successful. It occurs to me that this is, perhaps, the driving force behind our consumerist, shopaholic society. When we go searching for the right shoes, that perfect dress, the best home entertainment system or whatever pushes our shopaholic buttons, are we in fact buying hope? And, if so, bearing in mind the destruction wrought in the lives of so many by their need to spend money, isn't it time we started looking elsewhere than the mall to find the hope we crave? As I get to know God more closely - a gradual process I have to say - I envisage a garden that he has planned for me to live in. It is full of things that he has created and I am surrounded by his beauty; in his care I feel safe, well fed, peaceful, happy and, yes, the longing of the perfume buyer, I feel beautiful. This is the hope that we are promised through Jesus Christ. For me, it is epitomised by 'the garden'."

The album was released last November so appropriately enough it contained a Christmas song. "Christmas Lady" was the first song Kevin and Penny wrote together. She recounted, "I have a 10 year old son, his name is James, and, to quote another parent, in him I am well pleased. In fact, to put it bluntly, in my view James is cleverer, more handsome, kinder, more fun, more obedient than anyone else's children. All this, and I have a sneaking suspicion that, like most mothers, I may carry just a hint of bias. I know the truth of course; in most people's eyes, my son is, in reality, pretty ordinary. I've had my nights sitting by a hospital bed, praying to a seemingly absent God, my moments of astounded delight at my son's charms and his achievements, and I've had my moments of longing to protect him from every fall, every knock in confidence and every unkind friend.

"So what must it have been like for Mary? Her son was anything BUT ordinary. How did she feel as she watched him grow up, that first and then numerous subsequent miracles? His extraordinary teaching, his unprecedented wisdom and kindness. If I was Mary, I would have been begging for Jesus to, ideally, keep away from, and at least not to offend the Sadducees and Pharisees. She followed him everywhere, culminating in his arrival in Jerusalem on Palm Sunday, she saw him crucified, she saw him after he rose again. . . My mind is blown. I'm hoping to meet Mary in Heaven, and if I do, this song covers just some of the questions I'll be putting her way."

Penny spoke about what is possibly the album's most powerful number, "Life Goes On". "Last year I had my 10th miscarriage. I find it strange that with each pregnancy hope for a second child would be reborn with renewed optimism. Excuses would be found for previous miscarriages that would make this pregnancy different. I have grown familiar with the pattern: shock and disbelief, followed by anger, in my case, anger very clearly directed at God for allowing my hopes to be raised and then summarily dashed again; anger at wasted time, wasted hope, wasted plans. A deep sense of betrayal. Followed by defeat. And finally the questions. . . questions that linger on and rock the very foundation of my faith.

"In the midst of my last storm, my Lord made something clear to me. He showed me the disciples, among a great crowd following Christ to Jerusalem on Palm Sunday, waving palm fronds and singing. Christ was their great hope, he was going to save the Jews from the oppression of the Romans, he came with wisdom, kindness and miracles and he turned life on its head. But then, in the space of 24 hours, their great hope was betrayed, humiliated and sentenced to death by crucifixion. They must have been waiting for him to do something to save himself, but he did nothing. They'd seen amazing miracles, and they'd witnessed extraordinary eloquence, but, in his own defence he did absolutely nothing. I bet they continued to wait for a miracle right until the last moment on the cross when he said 'It is done'. Then there must have been shock and disbelief, followed by anger, probably a sense of betrayal. On that Friday, all they felt they were left with was a broken body. And then came defeat.

"What God was showing me was that, whereas we know exactly why Christ suffered death, was buried and rose again - we get it, it is the very centre of everything we learn about him - the disciples had none of this prior knowledge. They had very little clue as to what the greater plan was. Each stage had to be experienced in full Technicolor and could only be reviewed with the benefit of hindsight later. But God knew the plan; in his hands a great miracle was being done. In the midst of each of our personal tragedies, we will all suffer shock and disbelief, anger and finally defeat. God wants to be with us to help us through the pain and to ease the burden. And we can know that in the depths of our pain, someone has been there before."

we enjoyed your visit to stoke and it was truely a wonderful experience. would like to purchase another CD love can be a bumpy road