Overtone: A band of dance music evangalists from York 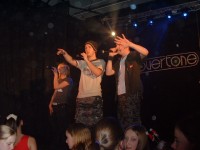 Tony: What's the history of Overtone?

Matt: Before doing a music degree at York University I did a year out with TVB, YFC's itinerant band (that was Andy Flannagan's first year of leading TVB) which really demonstrated that music can be an incredibly powerful tool for evangelism amongst young people. One of the vocalists from that year also went to York Uni, and in our second year (about two and a half years ago) we got together with a couple of other music students with the plan of forming an evangelistic dance band along the lines of The Tribe to do occasional assemblies/events in the secondary schools of York. After I graduated last summer a local schoolswork trust took me on part time to continue running the band - all the other original members have moved on, so there's a continually changing membership made up of students. At the moment there's six of us in the band: Beth Scott, Ellie Borer, Helenor Kittle, Vicky Reid (all students at York Uni), Sarah Welch (student at St John's College, York) and myself.

Tony: How would you describe your style of music? What are your major musical influences?

Matt: Our music is pretty diverse - we try to cover as many styles as possible so as to appeal to as many people as possible, so the CD has a bit of garage, trance, drum 'n' bass, nu-metal and pop cheese all mixed in. As a group our main influence is obviously The Tribe, who came into my school in Manchester when I was 15 and made me think I'd want to do the same thing some day! My personal tastes are fairly eclectic - the last few CDs I've listened to include St Germain 'Tourist', Eva Cassidy 'Songbird' and Linkin Park 'Hybrid Theory'.

Tony: You've been working with one of the legendary figures in UK Christian music, Zarc Porter. What's it been like?

Matt: I've wanted to produce Christian dance music since I was about 14, at which time Zarc was pretty much the only person doing that sort of thing. So he's been a great encouragement to me directly and indirectly for quite a few years - and it's been great working with him 'cos he's a very nice man! Hopefully we'll be working together in the future on the Innervation project
- watch out for thebandwithnoname!

Tony: What's the band trying to do spiritually?

Matt: Our mission statement is: To give every secondary-school age young person in the City of York repeated opportunites to hear the Good News of Jesus presented in a culturally relevant way.

Tony: If you died tonight and went to Heaven and could perform one song before the Lord, what would it be?

Matt: "Thank You For Saving Me" - 'cos otherwise I wouldn't be there!

For more on Overtone visit the Overtone artist profile