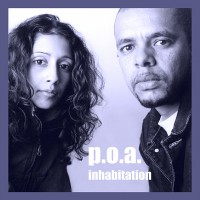 Tony: Our readers read about you in CR68 when City Lights focused on Coventry. This release by P.O.A. is, I believe, your first recording since then. Tell me about P.O.A.

Preacha G: When we first came together Angela and I kept on saying, "What's the p.o.a.," meaning plan of action, you know, the stuff, rehearsals, meetings, etc. Then God shed some light by saying, "Pray over all," and that's how it started. When we finally hooked up with Paul Spencer, the genius producer, we agreed that the project should be called P.O.A..

Tony: So who's the lady who sings with you?

Preacha G: The lady in P.O.A. is Angela Baxi, music teacher and worship leader at Queens Road Baptist Church in Coventry. We hooked up at a local outreach event several years ago, we then started writing songs together which we have ministered at local outreaches, festivals, nightclubs, charity events. This was a blessed time

Tony: You clearly have a passion to work with youth in schools. Presumably, you consider yourself an evangelist.

Preacha G: Evangelist, yeah man, a radical one at that. Just to set the record straight, 1 Corinthians 1:31 says, "Therefore [or for that reason], let him who boasts boast in the Lord." Yeah man, I'm boastie. I have had the honour of sharing the Gospel in schools and seeing youths and children make a commitment to God. I was also at a Youth Alive team event in Birmingham last month. The speaker was Glynn Barrett. Wow, 25 youths saved - now that's what I call evangelism.

Tony: There is clearly a lot of prejudice in the churches towards garage, hip-hop and ragga, or that's the way it seems. How were you finding it?

Preacha G: Excellent question, now check this out: the Apostle Paul said in 1 Corinthians 9:22, "I have become all things to all men so that by all possible means I might save some." The answer to the question is yes. In my early years as a Christian I struggled with the Church identifying with the hip-hop and ragga culture and I believe it's just that the Church does not understand that God is in this and that he can use any type of music to reach the lost. I also believe that some churches are just afraid of change and I know the Lord says, "I am the Lord and I do not change." But did he say anything about music? Well, to those who do not understand, we are the voices like John the Baptist crying out in the wilderness declaring, "Prepare the way for the Lord," and some preach it classical, some preach it pop, some preach it folk and some preach it rock and some of us preach it ragga, garage, hip-hop and we just cannot stop, glory to God.

Tony: If you had to select one mix off your latest recording, what would it be?

Preacha G: It has to be the last track which is "Worship Him" because when it all comes down to it, it is all about him. The title of the track was taken from Psalm 96, key verses 1 and 9: verse 1 says, "Sing a new song unto the Lord," verse 9 says, "Worship the Lord in the beauty of his holiness." Now that's what it is all about for without him there is no true worship, and all God's people said amen...

Tony: What are your future plans, is there a Preacha G or a P.O.A. album in the pipeline?

Preacha G: Definitely gonna be an album which I will be starting soon, entitled 'The Preacha Man'.