Pam Thum: A CCM hitmaker being tipped to become the "next Amy Grant".

A Christian pop talent makes her UK concert debut in August at this year's GosFest. ]an Willem Vink spoke to PAM THUM. 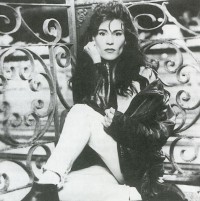 It takes a very special kind of debut album to get record companies to pull out all the promotional stops with Big Buck promotion. It happened with Word Inc a couple of years back with 'Introducing Julie Miller' and now the Benson Company are putting their dollars where their mouth is and heavily promoting 'Pam Thum'. It's certainly a dazzling debut, an album which encapsulates much of the bitter-sweet poignancy and pop-hook production savvy of Amy Grant on a set of self-penned songs which shows that Pam Thum has developed song writing craft over many years. For Pam is no newcomer to music, only to the Big Break.

Pam literally grew up in music ministry, her parents being missionary evangelists, travelling the world presenting the gospel through preaching, drama and music. "We would stay a month in one place and I would find little friends," said Pam, "but the friendships would only last as long as our stay. Etched in my mind are the memories of me with my head out of the window waving with a sad look on my face as we pulled out to go to another place where, in a month, it would all be repeated."

Pam's parents were musical as well, and played numerous instruments. Since Pam was home-schooled music and Jesus were both natural and regular parts of her education. Jesus was the one she would go to when she was lonely. "I was a real happy kid but as long as I can remember there was a knot of loneliness that was there inside of me," explained Pam. "Because of that, I would always run to Jesus. When I would sing and talk to him, I didn't feel lonely anymore. That's when I started to learn that Jesus would never leave me."

This comfort is still a major aspect of Pam's ministry as a Christian artist. "A little girl came up to me at a concert one time and said, 'When you sing, I feel hugged by Jesus.' That touched me so deeply, it brought tears to my eyes. When people hear me sing I want them to feel touched by Jesus. When I was three, my mom tried to live before me a life lesson - rehearsal is good, but without reality it's empty. I learned Jesus was my best friend, my saviour, everything I needed. Whatever I do or sing, I want it to reflect all that Jesus is - love, life, laughter, peace, healing - because that's what Jesus offers."

Thum started her musical 'career' at two and a half. "At three, I recorded my first album featuring the hit (ha ha) 'Everybody Ought To Go To Sunday School'," stated Pam, tongue in cheek. "I began writing songs at an early age."

Thoughts of being an actress and model in her mid-teens led Pam to take a break from singing for a couple of years as she began to think and pray about who she was and how the Lord would have her use her talents. At 16 mega-producer Keith Thomas encouraged her to continue crafting her songwriting. Pam started writing songs and became better at it with the years. In 1987 Trace Balin recorded one of her songs, "We Are An Army". Pam also started touring with popular MOR gospeller Gary McSpadden. "I began singing at youth rallies and colleges until last year when I signed with the Benson Music Group," continued Pam. "In some ways it was a long road, but because God's timing is always just right, it was very peaceful."

Benson teamed Pam Thum up with hit songwriters Robert White Johnson and Bill Cuomo. Pam doesn't hide her excitement about being able to work with them. "When my managers first introduced me to my producers, Robert White Johnson and Bill Cuomo, I had this incredible peace and was so happy I wanted to cry. I just knew they were supposed to be my producers. I walked into the studio and there were platinum and gold records lining the walls, I felt like a little girl dressing up like an adult. They made me feel so comfortable, yet pushed me when I needed it. They have worked with many great artists like Barbara Streisand, Don Henley, Kim Carnes, White Snake, Steve Perry, it was an incredible privilege to work and write with them. They became more than my producers. They became my friends."

Although absolutely no newcomers, both Cuomo and Johnson share Pam's excitement about their collaboration. "In all recordings I've done so far," said Cuomo, "working with everyone from Barbara Streisand to Steve Perry, Pam's project is the nicest, most well-rounded one to date." Johnson agreed: "Creatively and spiritually, this has been the most rewarding recording experience I've ever had. The world really needs music from Pam Thum right now. People are desiring sincerity. Her songs are hopeful and healing and true to her heart. Pam is the best ambassador of good will anyone can imagine."

Although her eponymous debut surely does have crossover potential, Pam does leave no doubt about her faith. Commenting on one of the songs, "One Voice Now", she said: "There's so much vulgarity in our culture now, and people really believe that almost anything goes. We wrote 'One Voice Now' to say that there is absolute right and wrong -everything isn't in the grey zone. There is one voice, in Jesus, that speaks the ultimate truth. We have to set aside our self-centredness and listen. When we convey that message and start acting upon it, we become that one voice and eventually the world will see a difference in us."

On a musical level Pam names artists as Don Henley, Celine Dion and Michael English as her influences. "I've always been a fan of Russ Taff and Bonnie Raitt also," Pam said. "I'm a very intense but simple person. I have many different sides and I hope the album reflects those differences. Most of all, I hope the aJhum shows people inside my heart."