Papa San: Taking the concept of reggae gospel to the USA

Gospel reggae is still a form of music which causes more than a few ripples of controversy. Mike Rimmer spoke to PAPA SAN. 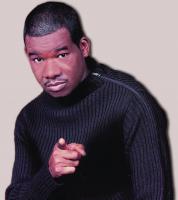 There are few forms of music that have as negative associations as reggae. Splif-toting singers, wildeyed Rastafarians and bump-and-grind dancehall exponents seem light years from a Christian lifestyle. Yet as Cross Rhythms has documented down the years, a handful of pioneering reggae artists have determinedly utilized the sinuous rhythms of Jamaica to proclaim the Gospel of Jesus Christ. In recent years two of reggae's most popular figures, Papa San and Junior Tucker, have shocked the world of Jamaican music by changing career midstream to record gospel music.

Under his recording moniker of Papa San, Tyrone Thompson became known in his homeland as "the fastest mouth in Jamaica." A pioneering toaster, he began his musical life working on sound systems. Papa San quickly gained a reputation as one of the most creative DJs in the world and probably the fastest. Early hits like "Animal Party" and "Talking Parrot" were characterised by imaginative lyrics and a quick-fire delivery. His ability to connect with his audience's experiences were demonstrated during this period and continue into his gospel reggae. In the late '80s he was paired with Tippa Irie and as '80s turned to '90s he was recording once again in Jamaica. Working with a number of different labels and producers including the legendary Sly And Robbie, one tragic turning point was the death in 1993 of his older brother, Dirtsman, also a DJ, shot dead in Jamaica.

In 1997 Papa San became a Christian and his music took a whole new direction. He had been dissatisfied with his life despite the fact that he'd been a huge success. He remembers, "I began to search and read the Bible. That's really when the Holy Spirit began to speak to my heart and say, 'Hey! You messed up! You need to get your life right.' I was so scared and concerned at the time. I didn't even know what conviction was. But man, it was a frightening moment. I felt like if I didn't have Jesus now I would go straight to hell. So I said to my wife, 'I don't know if God will forgive me for all the things that I've done, but I'm so frustrated and confused in the middle of my career.' So we went to a church and spoke to a pastor who told me about Christ and the message. He was talking to us and my heart was already fixed before I got there that I wanted to know Jesus. We said the sinner's prayer, received the Lord - and the rest is now history." Even with his new faith in place and a desire to minister, Papa San faced plenty of opposition from people suspicious of the use of reggae styles of music for Christian ministry. San reflects, "People are coming 'round. I remember when I just put out 'Victory' in 1999, they started dissing. We had a lot of opposition from churches saying, 'This is not the kind of song to do.' We have 98 per cent of the church backing us. Some will turn around and see what the Lord is doing, but some will never do. That's something you have to live with and accept. 'Cause this is the real world and not everybody will accept you, but when you get the majority that's good!"

There are two major issues for the ability of gospel reggae to cross over. The first is the cultural baggage attached to the music. Reggae faces similar challenges that have faced the embracing of rock in the '70s and hip-hop in the '90s. The second is the language challenges of patois. Papa San even includes a glossary of Jamaican terms in the CD sleeve for 'God & I'. San comments, "Reggae music never started out exalting Jesus. It started out exalting a lot of other stuff: Sex, guns and drugs. So people paint a picture with that. And they don't look at it as a vehicle that brings a message. When you relate the Bible to it, people start to say, 'That's not right.' People are beginning to understand what it's all about. The Gospel is God's good news. What comes from the mouth is what really matters. So the music is making a great impact. And it's doing good."

Papa San takes ministry very seriously. "It's because this is about the Gospel of Jesus Christ." He explains, "It's not about going singing and getting people pumped up and then going home. We have fliers that say, 'We are fishers of men, and music is our bait.' That's what I always try and show people, that we use music as a pull-in - to minister to them and give them the chance to know Christ and win them to Christ. During concerts we always make altar calls and have counselors there and after the concert we lead people to the Lord and minister to them. That's the purpose of all the concerts we have done. We use the music as a pull-in, because there are some people who will not walk through church doors, but will come to a concert and that's how they're gong to get saved. It is a ministry and I'm an ordained music minister by my church."

Luv u San.your May ur path shine brighter and brighter each day unto the perfect day IJMN!

I just want firstly to say that Papa San,Ju nior and Stitc hie rae doing a good job in bringing the gospel to the world, keep it up. On the otherhand there are some artistes who makes difficult to relate, it is not clear what they are singing about or if God is getting any glory whatsoever. i think there most be a passion to worship or give reverence to the bigman upstears and not just occupational hobby where alot are sounding acting and dressing as the seculor. Not to knock anybody but Let us not forget that we are a royal Preisthood a Pequlior people a Holy nation. San, Stichie,Tucker and others who are doing the ministry justice continue to keep the banner of Christ HIGH........ Blessed love

i started following papa san in 2000 and since then i have been addicted to his music.i sing with a gospel group known as freeborn and we had the opportunity of watching papa san live on stage at the experience 2010 which took place in Lagos, Nigeria. we would like to do a song titled HIGH with him. WE LOVE PAPA SAN.

WELL I HAVE GOOD NEWS FOR YOU ALL ,PAPA SAN IS COMING TO AMSTERDAM BULLEWIJK HETTENHEUVELWEG NO 18 IN HAGGAI ACTIVITY CENTRE 28 NOVEMBER 2009.WE WILL HAVE AN REGGAEGOSPEL CONCERT WITH HIMM
AND HE RELAESD HIS NEW ALBUM HIGERHEIGTS.
MORE INFO or ticket:CAL NETHERLANDS 0647344879,OR EMAIL qu1_hadassa@hotmail.com
JUST BE THERE,WHE HAVE ALSO AUPAIR.
ticketservice netherlands

your ministry to us is a blessing,most especially i and my brothers and sisters.i will be grateful if i join your ministry as learn how to worship God in spirit and truth.

oliver ashley album always be a blessing to me, the ones i like the best is sing along 1,2 ,3 also give christ my best. u are doing great job 4 the lord.

I was 1st august 2009 in reggae jam bersenbrÃ¼ke to seling food. when I listen God song just camm to musik stage and was sooo blessed when I see papa san Br & sis. prais Lord. and from yours crew somebody give me the CD and i enjoy this Song.and God bless Papa san.

Papa San, LT Stitchie, Junior Tucker, are well known in the World system of Reggae and PRAISE GOD that the LORD beforehand had CREATED them for such a time as this.

There are so many Gospel Reggae artist out there. To those DJ's, event organiser more must be done to pioneer and push the Gospel Reggae, Hip Hop, R'N'B and other styles of music out there.

More high standard of Music. We should excel the standards of MTV etc.

Most non christian are not really attracted to the Gospel Choirs sound. This appeals a lot more to those in the Church community.

But for those on the street, what do they relate to, music they listen to from the street.

Heaven is going to be wonderful place and there will be different styles of music/worship.

It is time to draw from our heavenly account of creativity and be the trendsitters. So the world will follow JESUS and not the vice versa.

We are coming to the end of the age and we must be zealous to bring in the final harvest by media, music, films etc,

STAY EMPOWERED FROM ON HIGH.