Tony Cummings spoke to various members of the PARACHUTE BAND. 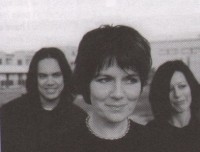 Tony: We Brits are becoming aware that something pretty amazing is happening in New Zealand concerning worship. To somebody who doesn't know about the Parachute Band or the Parachute Festival, how would you describe what is happening there?

Parachute Festival has been running in New Zealand for about 13 years now and we are seeing an increase in numbers attending every year. 2002 saw 22,500 people on the site and for a nation the size of New Zealand with not quite four million people, this is a staggering number. The Parachute Band was originally established as the "house band" to lead worship and back other artists at Parachute Festival and since then we have gone on to record five albums of home grown praise and worship songs which are now having impact right around the world. If you ask me what I think is happening here, I would have to say that God is doing something in this little nation at the outermost ends of the earth, that is not just for our nation but for other nations also, and it is totally independent of individuals or organisations, but he's using those who are willing to serve him in this way. It's almost like the foolish things used to confound the wise so that God will be glorified and not man! Personally I think, Parachute Festival is starting to shape the future generations of New Zealand and this is what we're really excited about also because New Zealand is not a Christian nation by any stretch of the imagination. But God is doing something now that's going to have impact in the years to come

Tony: Having spent some time in the UK and the USA how would you say that those church cultures differ from NZ?

Another good question! Church culture as such is virtually non-existent in New Zealand. No more than five per cent of New Zealanders go to church on a Sunday as opposed to possibly 40 - 50 per cent of Americans in the US. The mainline churches seem to be declining somewhat in attendance but there is growth in the more Pentecostal churches and people are becoming more fervent and passionate about Jesus and their relationship. It's almost as if lines are being drawn and people are getting real - not just adding a semblance of Christianity to their already busy lifestyles. Consequently, there is a sense of grassroots, real-ness about people's faith here. At the same time, there is quite an independent spirit about New Zealanders and sometimes that translates to people not seeming to need God. So there are great positives and negatives about our Church culture and I think we all could learn a lot from each other in different aspects of that culture.

Tony: Your music seems very much a synthesis of several different things, pop, R&B, easy listening, rock. Does the fact that your music is as broad based as it is mean that there will be some parts of a crowd who will only occasionally connect with a particular song?

Our music seems to reflect our stylistic preferences in the band but is also a reflection of the foundation of multi-culturalism that is New Zealand. When we first released our albums in the US, there was concern that with such varying styles, we may lose some people and some markets. More and more now however, we are seeing that the variety is actually a major strength and we have the ability to be able to stretch the boundaries a bit more. My kids love our music (although our four year old son is a MAJOR Delirious? fan! - I mean MAJOR!) but my Mum who is in her 70s also loves our music. Admittedly, each will relate to different aspects of the albums but I don't think we've come across anyone not connecting in the live setting. Maybe that's because the worship experience has so little to do with the actual music, but so much more to do with hearts reaching out and responding to God in faith - independent of the musical style.

Tony: If you had to choose say three songs from three of your previous albums as representing your best stuff, what would they be and why?

"So Glad", which expresses how we feel about the fact that we can have relationship with God. "Everything That Has Breath" which just meets our heart for worship and "Praise Him" which really just describes what we are all about.

Tony: You new album 'Amazing' is going through Fierce! Distribution here in the UK. How did you first meet up with the Delirious? guys?

Delirious? have played at the Parachute Festival three times now and are absolutely adored by all of us and the New Zealand crowds that come. They have been amazingly received in New Zealand and I know that along with their music, it is equally as much to do with their hearts and what they project from their own lives when they play. They are awesome, humble, very talented guys and we love them and feel extremely honoured to be involved with them and Fierce!

I think my favourite song would have to be "Complete" - not necessarily from a musical stylistic view point but from what it does to my heart when I lose myself in it. This is a song written by a very dear friend of ours who has encountered major storms in his life but his strength of faith to walk on through those storms even though he may not see completion until the end, is so powerful. This song is literally touching people all round the world at the moment who are walking through their own personal Calvary experiences. I also love "Amazing" - there's something about focussing on the goodness of God and his awesome, unconditional, never failing love that does something in your heart.