The overall attendance (around 2,000) was a tad disappointing but everything else in this exciting new addition to the Christian music calendar was a roaring success. The quality of the acts playing, the idyllic summer sunshine, the fine sound quality and the powerful sense of God's presence all merged to make Passion a memorable experience for everyone present. Already plans are afoot for a Passion '08. As the crowd took their places Kev Whitmore, worship leader at The Galley church, gave the crowd something to focus on as they took their places on the already baking-hot concrete.

The programme "proper" commenced at 1.30pm and Replenish showed themselves to be one of the most improved rock bands in Christendom. The trio from Britain's south coast were drum tight and their powerful anthemic songs got a sizeable crowd at front stage punching arms in the air. Dressed, rather inappropriately considering the heat, in collars and ties Replenish rocked hard and concluded their set with a favourite, "Everything", they introduced as "a slamming worship song." Indeed it was.

Next up was one for the young ladies. The new line up tbc, if possible, work even harder on stage than the previous line up. Their perpetual-motion choreography had every teenage girl and child either happily clapping along or endeavouring to do some of the simpler dance moves. The girl pop evangelists' new album is eagerly awaited.

At 2.45pm came one of the unexpected highlights of the whole day. The Burn Band have to be the punchiest, tightest bunch of church musicians in Britain and I wouldn't be surprised if rock devotees begin making regular visits to St Albans Vineyard to catch these worshipping rockers. But what gives TBB focus and direction is Sam Lane. With his long hair and all out passion he looks and sounds like a throwback from '60s California's Jesus Revolution while his amazing worship version of the pop standard "You Are So Beautiful To Me" was riveting and genuinely anointed.

Onehundredhours have sometimes seemed a bit static and uninvolved in some of their past live performances but clearly Tre Sheppard and co's lengthy sabbatical and the recording of the soon-to-be-released 'As Sure As The Stars' album has given the band a new lease of life. They were power personified and I for one was left baying for more.

LZ7 were on stage next and with their usual mix of powerfully funky tracks and on-stage dynamics had the most visible effect on the crowd so far. With Lins West every inch the on-stage funk master their hip-hop and funk fusion, coupled with some artfully selected samples ("Smooth Criminal" from Michael Jackson worked particularly well) that had just about the whole crowd (save for the oldies sat on chairs in a side section) up and boogying. The poetic Jonathan Bellamy had described LZ7 having "more street beats than a copper on foot." That nails it. 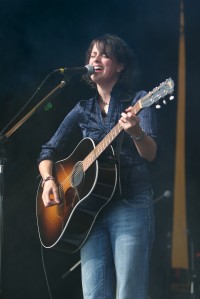 By the time Cathy Burton, with trusty guitar ace Dan Wheeler, strolled on stage the hot and excited crowd were ready for a rest. That's what they got with Cathy's usual ethereal, haunting songs the perfect accompaniment to a lazy sunny day. Her set was low on on-stage dynamism but high on mesmerising musical intelligence and everyone seemed to appreciate that.

Andy Hawthorne came on to the platform to tell everyone about Hope '08. Clearly this is the biggest evangelistic initiative ever to be undertaken in Britain and Andy's palpable enthusiasm was infectious.

Infectious too were Yfriday who, defying all the odds, got most of the crowd worshipping with their punchy, pop rock anthems. By the time Ken Riley and his cohorts reached their towering climax with "Revolution" it was obvious why Yfriday are at last set to record/film a live CD/DVD. It can't fail.

Andy Hawthorne came back on stage and though some of the crowd began to make long queues at the baggette and burger vans, hundreds stayed to hear a full-on evangelistic preach. Despite running wildly over time such was Andy's passionate presentation of The Cross that few could complain, even Salvador waiting in the wings to make their UK debut. And what a debut! Using a soundcheck as an opportunity for an extended funk groove their sound was gloriously tight and by the time Nic Gonzales launched into the first "proper" song of the set the crowd were already up and dancing. Salvador's sound, powered by an exceptional PA, was all but perfect. Anyone who had any doubts how a Latin pop band would fare in their UK debut need not have feared. Here was a glorious musical fusion where riffing brass, Santana-esque guitar and snappy vocals brought fresh life to the Old Old Story. They galloped through a delicious set of songs with fiery salsa, powerful Latin rock and stone-to-the-bone funk locked in a set so infectious that even most of the chair-bound oldsters were on their feet.

Then, to cap it off, on came Jaci Velasquez. The fact that this delightful lady, clearly with child, possesses the voice of an angel was a key factor in instantly winning over the crowd. But equally powerful was the vulnerability revealed in the dear sister's set, Jaci transparently determined to go beyond shallow CCM star posturing and minister with an openness about past mistakes in her life. And minister Jaci did with the songs "Lay It Down", "On My Knees" and "God So Loved" each carrying what, to me, was a powerful sense of God's presence while having Salvador accompanying her was a delight to the ears.

There was still time for Tre Sheppard to return to the stage and share about the origins of Passion '07 and how in 1807 thousands met God in an open air revival at a place, a short distance from where today's Britannia Stadium is situated. This, we learnt, was the birth of Primitive Methodism. It was hoped Passion could rekindle some of that Holy spirit-engendered enthusiasm.

At a little after 9.00pm Delirious? took the stage and we were lifted into a passionate, cathartic time of worship. The d:boys were in magnificent form. Martyn Smith roared his praised to God with all the power of an Old Testament prophet, Stu's guitar ripped out into the darkening skies with ferocious bite while those classic songs, old and new, had in one swoop transformed tired-but-happy crowd into an arm lifting, jumping, laughing, praising congregation. The on screen backdrop to "History Maker" with its clever spoof newspaper front page, reminding us that we ALL have a call to make history, was particularly effective. As I hitched a lift with Chris Mountford who, after a day interviewing Passion participants, was driving back to the Cross Rhythms studios to help in a special "after the gig" radio programme phone in, I pondered just how appropriate that "History Maker" song was for Passion '07. We'd seen a bit of music biz history - the first time Nic Gonzales and Jaci Velasquez had shared a stage together as husband and wife. We'd been part of a bit of local history - the biggest Christian music event ever to get going in Cross Rhythms' hometown of Stoke-on-Trent. But that classic song was a reminder too that just as the Spirit of God brought revival 200 years ago to those early Methodists, today, I believe, Stoke-on-Trent is edging ever closer to a time when the spiritual exhilaration felt by many at Passion '07 won't be able to be contained in a football stadium and will spread much, much further.

It wuz boss! Salvador N' D:Boys Were Boss aswell What Date is it nxt yr

It's on July 18th & 19th and is called Adoration this year www.adoration.nxt.org.uk

Fantastic event! Could have done with more locals turning up though - we too were on the disabled area and in contrast to 'crispy's' post thought that there was plenty of room and as far as I can remember there was only one child in the area and that was my niece and she was not bouncing up and down on the bars or getting in front of peoples view. I find it a little sad that some christians can only pick on the negative points rather than realise that being the first passion event there may be some teething problems - I hope that people instead of being negative will support what is a fantastic opportunity to declare the love of Jesus in a relevant and quality way. Well done!!

Regarding ticket price: Yes, Â£25 is a lot of money if you're hard-up, or if you've a family to bring; but just do a few comparisons: this was a full day out being entertained by top bands from 1.30 to almost 10pm; how much would do people spend for that long at Blackpool or Alton Towers ? It costs as much for a 2 1/2 hr performance of a Theatre Production in Manchester.
I was grateful to be enabled to be there by GOD's grace---a wonderful experience !!

It seems that anyone who was at this event really enjoyed it which is great to hear, but it would possibly have been wiser to run the event on a different day from Frenzy, which took place in Scotland.

I disagree with Carl, I though the ticket price was excellent and would pay more. If you compare the price to a secular music concert where your looking to pay Â£50 for the basic seats! The music was excellent, I too confess I went to see YFriday and Delirious but I am now a big fan of 100 hours and TBC. I wasnt so keen on Salvador, but that was because I couldn't hear a word they were singing. I know it was little disapointing in numbers but it was nice because it wasnt too cramped and due to the weather it was a good thing, it was nice to take a blanket sit down to the bands you just wanted to listen to and stand and jump around for the bands you did. I am already signed up to hear when tickets are out for next year!

The event was absolutely fantastic.
Andy Hawthorne - inspirational , he kept our attention. Tre Shepherd too
All the bands were fab, im even a bit of a hip hop fanafter seeing LZ7 for the first time. My hubby and i are Delirious? fans but my son and his pal were into the younger bands and none of us were disppointed.
Thank You.
The price of the tickets i feel were not too bad as if you were to go to any concert you pay that much to see on eartist we were able to see many and worship God . The car park floor was a bit hard but hey... think of folk back in Africa and other countries less well off than us...
Cant wait for next year.. WELL DONE TO ALL