The Paul Colman Trio are to their native Australia what for many years Delirious? were to the UK. Despite the relatively small Christian music scene that operates in the land of the didgeridoo, pc3 (as they are known to the SMS generation) have built up a strong following which has provided a springboard for what may now be considerable success. Just like Littlehampton's finest, pc3's independently produced albums kept selling out and they developed their loyal fan base through energetic gigs and a surprisingly high recording standard.

The genesis of the band goes back to 1997 when singer/ guitarist/ songwriter Paul Colman recorded a solo album 'The Band Thing' and followed up a year later with 'One Voice One Guitar'. These independent releases sold more than 5,000 copies each. In Melbourne in late 1998 the trio - Paul Colman (vocals, guitar), Grant Norsworthy (bass) and Phil Gaudion (drums) - came together and the following year released their debut, 'Serious Fun'. It was the start of greater and greater things.

'New Map Of The World' represents their first "corporate" venture under the Essential Records banner and, produced in Nashville by award winning Monroe Jones, is a reworking of material from their past life down under.

In June I spoke with Grant, pc3's bass player, about going Stateside and making the transition from independent hopefuls to mainstream contenders. "The shift to the USA has been many things," he explained. "Exciting, expensive, an eye opening experience, challenging, fun, an opportunity to grow in my faith and reliance on God and in our artistic expression as a band." 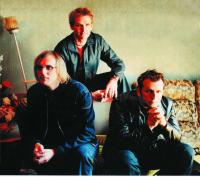 The band have made some changes during the transition. In one of their Australian albums, Paul sings about being "stuck in the middle" -struggling to find acceptance in the secular music scene because of the faith in their songs, but at the same time finding it hard to be at home in the Christian music scene. For a long time they were shunned by any major labels. "We've been talking about 'In The Middle' lately, " Grant told me. "We listened to it in the van on a very long drive and things have changed. But in many ways they're exactly the same. Pc3 is not interested in perpetuating a Christian culture. I mean a religious way of life, set of practises or way of thinking. There is so much Christian culture here in the USA as I'm sure you'll understand. I'm keen for that not to sound judgmental though. It is, obviously, an assessment on our part."

After seeing pc3 play a support slot on Third Day's recent US tour, it was apparent to me that some things had changed. Back in their Australian days, when I first caught the band live, Grant was a fan of very-glam nail polish. Now as a "mainstream" act, the glam has gone and Paul has become a lot more careful about the words he uses on stage.

Grant responded rather ambiguously as I questioned him on this change "We (and particularly Paul) have brought certain things more to the surface and I guess, made less obvious some other things. We have always adjusted what we do to suit the audience we're playing to. I think that's one of the greatest strengths of pc3. A cynic might say we sell out when we do that. We'll let them say that if they want. A song can seem different depending on how it is introduced. But the core message of what we believe the Lord has put on our hearts has never changed. Our songs can and have been played in both pubs and churches."

Pc3 have always wanted to put God at the centre of the gig, but have always put on an amazing show. It's a careful balance to strike, and I asked Grant how it works out in practice. "Do we lead worship?" he exclaimed. "Absolutely! But that can take many forms in our opinion. 'Fill My Cup' for instance has become a song that has grown to become a perfect vehicle for people to involve themselves in corporate worship."

"Paul explains that when we are defending ourselves in a fight, we stand in a certain way clenched fists in front of our chest, legs ready to leap back or forward. When we are making ourselves defenceless, our body language is totally different. Open stance, our arms spread, like we're expecting a hug, or up in the air like surrendering. In a group of people it can be kind of embarrassing to do that (unless it's your culture). But sometimes we think God wants us to be prepared to look a little silly. I don't see it as a distinct change as you might imagine. The whole gig is supposed to be worship. We're trying to be like clear glass that people can see through to God, rather than like stained glass windows that grab your attention and may distract you from even noticing the light. But then, we are called to make our whole lives worship."

The opinions expressed in this article are not necessarily those held by Cross Rhythms. Any expressed views were accurate at the time of publishing but may or may not reflect the views of the individuals concerned at a later date.
About David Woodford
David Woodford lives in Surrey and works for Christian broadcaster Premier Radio.

Last week I went to Soulfest at Gunstock, NH. Paul Coleman was there, solo (as he was last year). I really enjoy his music but I also love to hear his stories and words of wisdom. Thanks Paul