Midlands singer/songwriter PAUL POULTON has been a faithful journeyman in Britain's CCM scene. He spoke to Keith James. 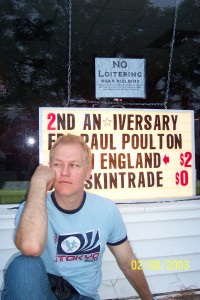 He arrives for the interview in a dazzling orange shirt and loud, bleached-white trousers, but talks humbly and gently. He has looked like a brusque Bob Geldof, yet sings like a reserved Tom Petty. He quotes from Mick Jagger's lyrics in the same breath as verses from literary giants such as CS Lewis and GK Chesterton. Paul Poulton is a walking paradox.

Of course, he's brought his acoustic guitar with him - he looks almost nude without it. So much is Paul known as a quintessential singer/guitarist, the instrument has become almost an extension of the man himself -another limb. The preamble is a joy; I'm almost tempted not to start the interview properly. Eventually however, I take things back to the beginning.

"I made my commitment to Jesus when I was just four," Paul recalls. "A lady came to our church - I'll never forget her name - Mrs Rainbow. She told us we couldn't get into heaven just because our parents were Christians; you had to commit your life to Jesus. I said, 'Yes, I'll do that.'"

Growing up in his native West Bromwich wasn't easy. The local lads made fun of his faith and heckled the speakers at his church. "One day, somebody was speaking and a bag of chips came flying through the window. I wouldn't mind, but when he'd finished speaking, they'd gone cold."

By the time Paul had reached his teens, a rebellious streak raised its head. By now, Paul was an accomplished musician, excelling at piano and then guitar. Recalls Paul, "I saw all the lads outside our church wearing leather jackets with chains on them. I got home, stuck a toilet chain on my brown anorak and shouted, 'Mum, I'm a rocker now - get me some pop!' My Dad came in and shouted, "That anorak's coming off!'" So ended the rebellion...

By the early eighties Paul became a session musician, playing alongside such names as Roger Jones and Dave Pope. Eventually, he fell into production work at a local studio. This kept him financially secure, but personally he felt stifled. "Although I was working with Christians, it was their vision we pursued and not mine," says Paul.

In 1987 Paul met a local Christian girl, Lorraine. They fell in love and planned to marry, though they both knew they might face problems. "The medical profession told me I couldn't father children and they couldn't offer me any fertility treatment," Paul reflects. "But we prayed and believed."

Easter 1988 arrived. A time Paul claims was a major turning point in his life. "God challenged me to use my talent to minister Christ to people. He told me, 'Anyone can play sessions, but not everyone's been through the experiences I've brought you through.'" Paul picked up his guitar and started to play anywhere that would have him.

Later the same year, Paul started recording his first album for Big Feet Music. The result, 'I Think I'm Being Followed', was promising. The songs from the album increased his live portfolio. A second album, 'Fallen People On A Fallen Planet', showcased his maturity both as a guitarist and songwriter. The album features the irresistible "The English Way", a hilarious commentary on a quintessential Englishman's view on society. By the time it had arrived, Paul's popularity had increased measurably. Audiences simply loved his laid-back attitude and delivery, though Paul never neglected the seriousness of the message. Graham Kendrick's producer Steve Thompson hit the bullseye when he described Paul as "An iron fist in a velvet glove". 'Body And Soul' (1995) followed. The album was conceived as a "something for everyone" package and proved every bit as popular as his previous work.

Paul has every reason to consider 1995 a major success, both professionally and personally. He recalls, "At the end of the year we discovered Lorraine was pregnant, in spite of all the doctors had told us. It was a miracle. Praise God!" They named the child Isaac. And so to 1997 and Paul can't help but enthuse about his latest album, 'Soothing Saul', his first all-instrumental offering. "Over the years many people have asked me to put more guitar-based songs on my albums and Chapel Lane seemed keen on me trying something a little different," Paul says. "This album is a celebration of the goodness of God and of the guitar itself. We're all delighted with it. I remember once when I was giving a guitar lesson to this older, retired gentleman. He asked me to play an instrumental piece for him and when I finished, he just broke down and cried. The song had clearly touched him. God will use anything to soften people's hearts. The guitar is just another instrument he'll use."

With his following seemingly bigger than ever, Paul is understandably excited for the future. "I have plans," he says, "but I have to be lead by God's Spirit." Paul's family - a testament to the faithfulness of God - clearly bring him great joy. As Paul picks up his guitar to leave, I ask him how life is with Lorraine and Isaac. "Terrible!" he replies with mock disdain, "All that screaming, crying and sulking... And as for Isaac..."