Down the years singer, songwriter, guitarist and record producer Phillip Sandifer has achieved a great deal within the Christian music world. Since 1981 he has recorded 18 albums ranging from his most recent project 'Simple Hymns' to an album he made for Disney Records in 1998, 'A Bug's Life Sing-Along' while his songs have been recorded by such acts as Glen Campbell, Fernando Ortega and Bob Bennett. The Kansas-based renaissance man is currently working on a new album, 'Both Hands'. He found the time to answer some Cross Rhythms questions.

Phillip was born in Baltimore, Maryland in 1959 but moved to Dallas, Texas as a youth. Academically gifted, he now holds Masters degrees from Clemson University and Gordon-Conwell Theological Seminary. He joined the staff of Campus Crusade For Christ and was to remain affiliated with the organization until the late '80s. He began his musical ministry in 1981 when on a tiny budget he recorded an album of his songs, 'Never Steal The Show', and released it independently. By 1984 things were progressing for the singer/songwriter and his album 'On My Way' was released on independent label Urgent Records, a company which appointed Phillip as its A&R director.

Over the next 18 years he went on to create nine solo recordings and obtained six number one Christian music songs. His top songs include "Just Because You Are" (1), "When It's All Been Said And Done" (1), "Learning To Love You" (1), "The Less Traveled Road" (1), "From A Broken Heart" (1), "What You Mean To Me" (1), "Man Of Compassion" (1), "Arizona Highway" (10), "Others" (3), "On My Way" (10). He has produced 23 full-length albums for himself and other Urgent and Heart & Soul artists such as Catherine King, Dawn Smith Jordan and Linda Richards. Phillip and his brother Michael record as the group Santa Fe which achieved two top 10 songs "Wider Sky" and "Love Speaks Louder" on their debut recording 'Moon Circles' in 1997. In 1998 Phillip participated in Disney Records 'A Bugs Life Sing Along' which was nominated for a Grammy Award in 1999.

Looking back over his years with Urgent Records, I asked Phillip what were his favourite recordings of that era. "I'd love to say that mine were my favourites. But, quite frankly I really have a difficult time on my own projects because of the difficulty in self assessing. However, with each one of my projects I've learned a tremendous amount from the engineers, players and writers that continues to really serve me today and hopefully improve my skills. My two favourite projects that I produced were Dawn Smith Jordan's 'Canopy' and Catherine King's 'Windows And Doors'. Both were very young artists at the time and although neither project received a great amount of distribution, the authentic nature of the songs that each artist wrote and recorded made them the projects themselves an easy work offering back to the Lord."

What would he say were the high and low points of the Urgent Records era? "I would say that the high point was when Bob Bennett's song 'Lord Of The Past' reached number one on the AC charts. This had mostly to do with the belief level we/I had (still have) in Bob and the power of the message in that song. In some ways it confirmed our vision and direction as a writer/artist-driven label at the time. Our low point came three years after that success. Our distributor was in the process of being purchased and it created tremendous instability for them and therefore for us by association. It was at that time that we had to dramatically re-evaluate virtually everything about how we were operating as a small Independent label."

In 1999 he withdrew from the music industry in order to focus on expanding Christian radio's reach in the Austin, Texas metro area, finish his educational pursuits and spend more time at home with his family. In 2000 he joined a local church staff in order to participate in furthering the involvement of the contemporary arts in church settings. In 2004 he participated as a guest vocalist on his second Disney Recording - 'Luv-A-Byes', recording the Kenny Loggins classic (and one of Phillip's favourites) "Return To Pooh Corner". Between 1999 and 2005 Phillip participated in launching four new radio stations broadcasting largely Christian music programming in the Austin area. In addition, he launched a local community radio station (KDRP-LP, aka K-Drip) to serve his local community of Dripping Springs, Texas.

After becoming worship and arts director at Colonial Presbyterian Church in Overland Park, Kansas, Phillip recorded an album, 'Expressions: Songs Of Worship' in 2010. The following year he released 'Prone To Calamity' on his own Wider Sky Records. Cross Rhythms' reviewer commented, "This has to be one of the best self-produced albums I have come across in many a year." Speaking about the project Sandifer said, "'Prone To Calamity' in a large way is a broader expression of something I learned in my marriage a few years ago. Truthfully. . . my wife Rene is right about 90 per cent of the time when we have a disagreement. As I've gotten older, I play the odds, going with her view more and more. This generally leads to better decisions and a better marriage. I say this jokingly but truthfully, as humans, often our first instinct is wrong, but as we grow in Christ, we are offered the ability to play against type. Type being fallible humans. As we follow his leading more, we generally experience more contentment. That's the essential message of this project. Because we are who we are we are generally prone to calamity. But through Christ I can do all things. And I grow wiser in him."

The following year the consummate singer/songwriter made the surprising choice of recording an album of ancient hymns. Phillip explained, "I was simply not able to find collections of some of my favourite hymns done in a really simple way. I'd say some of Fernando Ortega's offering were the closest thing I found. But, being an acoustic guitar player I wanted to archive something really easily copied on guitar and simple, travel friendly instruments that most anyone could pick up and play. I had for a long time played these songs like this so I figured I'd just go ahead and record them. I've just begun the second project. The timelessness of message and melodies of these songs continues to blow me away." 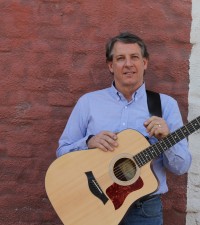 Phillip was asked what were his thoughts on modern worship music being criticised for being theologically lightweight. Typically, the songsmith was gracious in his response. "To me music is an authentic expression of where someone is. If they are in a spiritually deep place, bring me the music that reflects that. If not, I can appreciate a song written by a young believer that might not be as weighty as perhaps what they might be capable of writing five years from now. I'm good with authentic! Someone else out there is likely going to be ministered to because they may be in the same place of growth."

Phillip is now putting the finishing touches to a new album he thinks will be called 'Both Hands'. He commented, "I will say that it has been the most rewarding project start to finish. Some old friends (Tom Hemby, Carl Marsh, Nic Whitworth, Tim Crouch) played on it and it was a reunion of sorts (to me anyway). Also, I really feel like the songs came out as originally envisioned (which doesn't always happen). So to me it has the quality of allowing someone to share in my quiet times and whether they like the material or not it was translated as close to real as possible if nothing else. It looks like we are going to have a couple of the songs mastered at the Abbey Road Studios as they now take mastering projects over the internet. Their mixes have a transparent quality to them that I have found hard to put my finger (or ear) on as to why. Pretty fun. And now somewhat affordable."

Finally, Phillip was asked what spiritual insight he had gained in recent times. "My pastor gave an incredible message two years ago on the fact that whether we like it or not we are the sum of our parts. And that God will use it all. That is, we have done wise things, not so wise things, we have joys, regrets etc. But. . .God will use it all to his glory! Especially if we will be so brave as to be honest with ourselves, others and certainly the Lord. At the end of the service he had people write down something that had gone un-confessed on a piece of paper, then confess and deal with the Lord about it and then bring it up and place it in a basket as if to release it. We saw over time that this was the beginning of many people coming back into genuine communion with the Lord and his people. This has really provoked me to keep short accounts with the Lord and really take self reflection seriously. It's that Lord Of The Past thing coming around again (thanks Bob)."