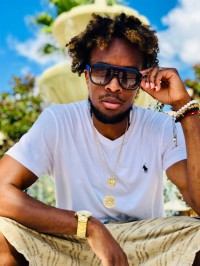 PhillyTF is a Christian hip-hop artist out of Dayton, Ohio, who has come to the attention of xRhythms listeners through his electrifying "Woahh!!!". He took time out from his busy schedule to field questions about his life and spiritual journey.

Tony: What's with the name? You're not from Philadelphia, are you?

PhillyTF: "No, I'm not. Dayton, Ohio. I've lived in California as well, but was born and raised in Dayton. I never really had an artist name or a stage name, but I was sitting in an east coast Sub restaurant called Penn Steak eating a cheese steak and it just kinda dawned on me, 'I'm really enjoying the cheese steak, so I think my name is going to be Philly.' That's really where the name came from, eating a cheese steak at a restaurant."

Tony: Tell me about your family background.

PhillyTF: "My dad worked for General Motors. My mom worked for the government as an administrative assistant. My mom grew up in the church. My dad grew up Church of Christ, which is kinda like Christian but it's a different denomination and theology. He didn't grow up in the faith, it was more on the surface where you just go to church and do the routine thing. We grew up with a bit of an understanding of God but nothing really intimate - understanding the Holy Spirit, stuff like that. My parents were functioning drug addicts. I bounced around different houses and projects - a little bit of a rough upbringing. Nothing too strenuous. Throughout high school I played basketball. I knew about keeping my grades good, staying out of trouble. But as I progressed in life, I found my way in the streets - fornicating, selling drugs, just running the streets."

Tony: What was the moment of spiritual breakthrough for you?

PhillyTF: "It wasn't in a church service, it wasn't a message on TV. My apartment got broken into. This was about 2012. I had some identity issues with materialistic things and money. All those things were stolen. I called the police, and while they were fingerprinting the apartment, doing their job, I was outside. It was two, three o'clock in the morning when that happened. This was coming from a spiral downward lifestyle - drinking and money and women. I had this small pull in my heart where I felt like this was God, one of his most impactful moments where he was like, 'Hopefully this will get him to connect with me.' Literally that night I was outside and I looked up to heaven and told the Lord, 'I quit. I'm done with living for the world. I just surrender.' I always tell people I put in my two-week notice to the world. At that moment, the Lord has seen that vulnerability in my heart, that reception of knowing I've been living a life that has been a complete me - just doing me. The Lord came in and my life never was the same from that morning."

Tony: Did you join a church?

PhillyTF: "I was already going to church. I was one of those ignorant sinners. I went to church every Sunday. I would go to the pub on Saturday drinking, and I would be in church on Sunday. I always had this idea of God, but I didn't understand that there was an actual real relationship. Some people have a religion-ship but I actually had a relationship. My conversion was drastic. I was straight hot. For three months I locked myself in my apartment, and I had read through the four gospels and Proverbs for about three months straight. Just those five books. God just downloaded so much. My hunger and my desire for him kept increasing. I completely let go of all worldly things. I'm not saying I did it perfectly, but God gave me a specific calling. I didn't say that because I'm saved and I have this relationship I'm going to abandon my homies that I used to run the streets with. I said, 'Lord, I don't want to be around those things I used to do, but I want to be an example and a reflection of you around them, showing them this transformation is real and it's a life that can be can be lived out.' To this day, my homies respect me and still want to associate with me, because I never look at them with judgment. I always wanted to encourage them. I'm like, 'Let me do less talking and more walking.' That's what really works, the most powerful part."

Tony: Where did the rapping start? Had you done any prior to becoming a Christian?

PhillyTF: "Yes I did. Initially I was an athlete. Basketball was my life. My dream was to get to the NBA. My cousin used to do music, and I would always be intrigued by it. My dad's conversion was similar to mine. He used to smoke crack. He gave his life to the Lord while watching TBN and just completely changed. I wasn't really allowed to listen to hip-hop, because my dad was really on it, but as a kid you still find a way to do it. I started off as a secular artist. I was putting all that poison out - sex, drugs, cussing. I was a complete opposite of what I am today. That was what started and then once I got saved I said, Lord, I want to do this for you. I want to make and create content as a testimony, use some of those same things I used to do and rearticulate it in a way to where it can still be enticing to the ears but be powerful with a message - all representing God and him getting the glory. It went from secular to Christian hip-hop."

Tony: Did you have a name and do any recording?

PhillyTF: "When I was a secular artist I was in a group called Lavish Boy Gain and we put out two projects. We were almost close to getting a deal with a major label. Right at the time we were peaking, the first member in the group said that the lifestyle was becoming a bit too much. When I saw him leave, that was right around when I got saved. I said, 'I can't be a Christian, really wanting to represent the Lord, and still put this music out.' So I backed out of the group. At that time I was going by Philly. I don't know where the TF came from, but it just became synonymous with the name. A good brother of mine who was a singer in Ohio said, 'You should have the TF stand for "totally free", because Philly is totally free.' So that's where the whole PhillyTF comes from."

Tony: Was 'D.O.P.E: Disciple On Planet Earth' your first release?