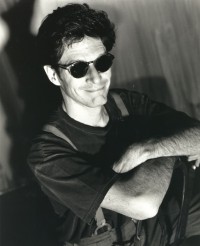 When John Denver died in a plane crash in October, Noel Paul Stookey mourned his passing and told the Times, "The challenge for all of us is to share our vision - and John was better at it than a lot of people." At Greenbelt '97 I had the privilege to spend some time with a man well able to match Denver's vision and yet singer/songwriter Pierce Pettis remains relatively unknown despite a decade touring the coffee houses and wine bars of America's burgeoning 'new folk' movement. As his faith is plainly evident in many of his songs, I wondered why he was even unheard of in CCM circles.

"I don't avoid CCM gigs but whilst I am grateful for their support, I try to play where it is appropriate," Pierce told me. "I am no more ashamed of being a Christian than Suzanne Vega is of being a Buddhist and she doesn't actively play Buddhist gigs.

"When you're a Christian," continued Pierce, "that's your world view. It's how you see things. The Christian themes in my songs are ingrained in me but I'm not trying to bend somebody's will. I like songs that tell the truth nakedly but allow a certain freedom on the part of the listener to make up his own mind. I don't feel that I have a mission - not that propagation is wrong, it's just not in my job description."

I asked Pierce where his career began. "I was raised in Fort Pane where the band Alabama came from. There's a lot of music in the Appalachians - bluegrass, country, blues and rock and roll." Pettis recorded 'Moments', his first album, for a local company in Huntsville. "Then Tom Willet of A&M Records heard it and invited me out to California," explained Pierce. "He advised me very, strongly not to sign with anybody until I had shopped around. Through Tim I met Mark Heard who produced my next album, 'Tinsel Town'. High Street Records released that along with a repackage of the first album."

Working with Mark was a profound experience for Pettis. "He was the funniest man I have ever met, yet if he was unhappy about something he would let you know -and in no uncertain terms. I'm the kind of person who drives people to distraction. I like to talk and I have a zillion ideas going in my head all at once. I have a great time but sometimes people around me tend to find that it tries their patience somewhat. Mark and I would work all day but at night he would have to shut me up!"

Mindful that he had played with Heard at the Cornerstone Festival shortly before Mark died from heart failure in 1992, I wondered whether Pettis had felt like Elisha taking on Elijah's mantle as a singer/poet. But Pettis recalled some words of Randy Stonehill who had once said. "Mark always made me feel like an impostor." "So," continued Pierce, "if there are any similarities between me and Mark, then all I can say is that he is the real one and I am the impostor."

Pierce was involved in the various fund raising recordings to support Mark's family before inviting their mutual friend David Miner to produce his next two albums. Miner had played in the Alpha Band with T-Bone Burnett and Steven Soles and has since produced with the likes of Elvis Costello and Leo Kottke. His sensitive treatment of the songs on Pettis' most recent album 'Making

Light Of It' has helped the singer to establish as a leading light in the current resurgence of folk music in the States.
Lately Pettis has structured his life more effectively by dividing up each month, with eight days writing for Polygram in Nashville and the rest shared between gigs and time for his children. One recent song, "You Move Me", has turned up on Susan Ashton's latest album and Garth Brooks has also recorded it. Yet the song was born at the end of a pretty difficult year as Pettis explained to an American interviewer, "I had just spent Christmas alone after a gut-wrenching divorce. It should have been horrible, but it was an amazing day because God was present."

I wondered whether being a Christian has hindered his career. Pettis claimed that the opposite was true in his experience. "In fact, being a Christian," he said, "has made me a better writer. I think that artists in general are more interesting when they believe in something."

To illustrate his point he talked about Catholic activist Dorothy Day - subject of a recent feature film - who features on his song "Lions Of The Colosseum". "Dorothy was a former communist who became a Christian and founded the Catholic Worker newspaper in New York. Her sympathies remained very leftist, but she had the kind of courage that led her to hand out her paper across the street from the communists. She noticed that Christians were avoiding poor neighbourhoods like the plague. So she went there."

Pierce would be the last person to place himself amongst such committed company, yet like Day he is comfortable about working in the real world where, to lift a phrase from one of his songs about a lamented friend, Christians are all too often known for "the presence of their absence."

Pierce Pettis is one serious songwriter. It's time the music world took notice.

This wonderful article certainly gives Pierce Pettis his due. I'm thankful that I'M among those who've taken notice of him. And I'm thankful that I discovered this article -- nearly 20 years after it was written! Looks like I need to start seeking out the music of the late Mark Heard, given Mr. Pettis' high praise...