Pocket Full Of Rocks: Myrrh Recording Artists With Love Songs To The King

The rise and fall and rise of Myrrh Records is one of the strangest stories in the unfathomable world of Christian record company manoeuvrings. Started by Billy Ray Hearn in 1972 as a division to Word Records (then of Waco, Texas, later Nashville, Tennessee), Myrrh was the first real contemporary Christian music label. Over the years it released albums by Jesus music pioneers like Randy Matthews and Petra and by the late '70s was the biggest label in CCM with Amy Grant, Steve Camp and many more. Yet the Myrrh imprint was allowed to languish and in 1997 released its last album. Then, unexpectedly, Myrrh returned. This year Word Records announced it was reactivating its imprint and that in future Myrrh would be a "worship label". Despite understandable jibes from more seasoned CCM observers perceiving the whole affair as managerial incompetence followed up with managerial bandwagon-jumping, one thing all the Christian music critics have been able to agree on is the first signing to the reactivated Myrrh has been a very good band. The 'Song To The King' album by Pocket Full Of Rocks has finally brought an excellent worship band from Texas to national and international attention. Full of memorable pop rock worship songs 'Song To The King' has got considerable airplay Stateside while in the UK Cross Rhythms radio have been giving much play to their "Closer To You" track. Pocket Full Of Rocks consist of Michael Farren (lead vocals, guitar, keyboard), Alisa Farren (vocals), Ryan Riggins (lead guitar), Kyle Lee (guitar, keyboard, vocals), Jody Crump (bass) and David Rollins, Jr (drums, trumpet). They have been leading worship in churches, conferences and festivals since 1995.

The band are mildly amused by an industry which wants to call 'Song To The King' their "debut". Commented Michael Farren, "We've had three independent projects and we've travelled with a lot of organisations around the United States. We've sold CDs out of just about everywhere! One of the most interesting terms I've heard recently was 'veteran newcomer'! I read it about someone else and I thought, that really is very appropriate. Like David said, this has been a 10-year journey for us."

As artists Pocket Full Of Rocks may be a new entity to American Christian radio, but as songwriters they'd clocked up a bit of a track record. Explained Michael, "Other artists have used our music through the years. Everybody from Michael W Smith - he did a song called 'Let It Rain' on his 'Worship' project. And Phillips, Craig & Dean have recorded one of our songs. So people might be familiar with a little of our music but not with Pocket as the band. But then we weren't looking for a label deal at all. When that phone call came last year it became real apparent quickly that a partnership with Myrrh was a God connection. And we love it. It's not what we expected - we're all very local church involved; worship leading, small groups, that kind of thing. We all have families and kids. We've been doing it a long time and so we weren't looking to be hitting the road all of a sudden! But it is a very pleasant and welcome experience at this point." 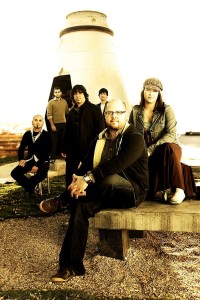 One of the elements Pocket Full Of Rocks are renowned for in their live ministry is having little or no idea what songs they will be singing in a set. "God has really released worship leaders just to flow and do that," explained Michael. "It's one of those things that really puts you in a place of being real vulnerable. I'll be the first to tell you, we've missed it on many occasions. Fallen flat on our face. You feel it's like a cold blanket just got thrown over the audience because we missed the Lord. But it's a learning process. It keeps us vulnerable. It keeps you humble because worship really ain't about you. You're up there saying, 'Okay Lord, whatever you want to do next. Where do we go with this?' The challenging thing is to be able to do that and yet still keep it corporate-friendly. To be able to flow and yet still keep it where the audience quickly engages with a particular song. We could sing over them all day long and they sit and stare. But our heart is really to get them vertical in direction."

Continued Michael, "We've actually had people scratch their heads over what we do. 'The music's so simple. The music's clichÃ©.' Well, it's by design. We want however many people in the audience to go there with us. We have no desire to overwhelm people with complexities but to engage them. The fact is the majority of people aren't musicians so to speak. So if it's corporate it's corporate. Let's go there together. It's very simple. There's nothing super-complicated about anything we do. 'Let It Rain' is seven words repeated over and over and over again! Michael W blessed us so much by recording that song it but who would have thought the song had commercial potential? I mean, what record label executive would go, 'Oh let's take those seven words! Those are gonna be great! Those are gonna go round the world!'? Yet God has a different plan for things. You never know. It's a new adventure. I think that's why we like ministry so much. Every time we play it's a surprise."

Pocket Full Of Rocks have learnt down the years to always seek to aid an audience in connecting with God. Explained Michael, "We have made a commitment basically, as a ministry, that whatever audience God sticks us with, we'll meet them where they're at. Not to say that we're way off somewhere ahead of everybody but we want them to engage. And if that be us stopping everything and just singing a hymn that engages them in worship then that's great. We love the times where there are 600 young people laying on their face weeping before the Lord in some kind of prophetic intercession. That's the sweet stuff too. We were a part of an organisation called The Call with Lou Engle for years. To just step on a stage and watch these kids go crazy for the Lord. It's scary to some people. It's like, 'There's a thousand kids jumpin' up and down and running circles around the building!' But on the other hand there's First Presbyterian, Houston where there's this amazing reverence and solemn awe of the Lord. So our aim is to just meet people where they're at. If we want to be crazy? Let's do it. And if we want to engage him in solemn reverent worship? That's okay, we'll do it."