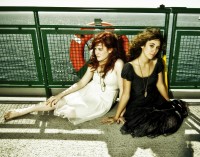 Acoustic pop sister duo Poema are one of the newest additions to the Tooth & Nail roster who are clearly expanding their list of artists beyond the alternative rock acts which for years now have been the mainstay of the company. Albuquerque-based Poema's six-song debut EP 'Sing It Now' was released in the US in March 2010 and picked up enthusiastic reviews while the duo's Christmas EP 'Once A Year: A Poema Christmas' was an engaging package of two originals, two vintage carols and a duet with Copeland's Aaron Marsh.

18 year old Elle (short for Danielle) and 20 year old Shealeen Puckett spoke to JesusFreakHideout about their early musical influences. Said Shealeen, "Growing up we used to listen to a lot of Switchfoot and U2, they're probably my favourite bands. And The Beatles. We also like a lot of country music." Said Elle, "Switchfoot used to be, well, still IS... my favourite band since I was like nine years old. And we actually had the opportunity to open up for them when they came to New Mexico. It was like a dream come true for us."

The girls' father Del Puckett is very much a fixture of the Albuquerque music scene. A consummate guitarist who, in 2001, was one of the original founders of modern rock band Soular, he is a soloist whose jazz instrumental "IPO (Initial Public Offering)" reached number one on MP3.com's jazz charts and whose style has been described as ranging from "smooth and silky jazz to extreme flat-picking taking in flavours of blues, modern rock, classical and Celtic finger-style." It was hardly surprising, therefore, that Del's children took to music with Shealeen being trained classically in piano for many years, Elle teaching herself guitar playing and son Christian (still only 15 years old) now the regular drummer when Poema are touring.

Elle acknowledged her father as her biggest musical inspiration. "At first he taught me a few chords (G, D, Em, C) and it just took off from there. I was about nine when I started and I would search through YouTube and learn covers of all my favourite artists and figure out the exact picking that they did and I just loved guitar. People say all the time, 'She doesn't play like a girl.' All I have to say to that is THANK YOU! I take it as a compliment. There are few girl acoustic guitar players that can actually PLAY and I learned how to play from my dad and from Jon Foreman and from Phil Wickham so I don't think playing like a guy is a bad thing!"

Shealeen spoke about the duo's early days. "Right around the time I graduated [high school], which was in 2008, we started writing. So, for me, it isn't that hard even though I'm taking college classes, but Elle was still in high school and our little brother is still in high school. We were all trying to do school and stuff, so I think that was the hardest part for me."

It was the duo's mother Louise who helped come up with the name Poema. Shealeen explained, "Our mom was having her quiet time, this was like a year and a half ago, and we hadn't come up with a name until then. She was having her quiet time, and the Lord just kinda pressed on the name Poem [with the accent on EM], and she was like, 'Hey I thought of a name for you guys!'" Up until that time the duo had been gigging as Elle & Shealeen. Continued Shealeen, "We wanted to be kinda different from most girl duos, we thought it'd be cool to have one word. But anyway, she said Poem, and we were like 'Eh?'" Elle pointed out that people would think the group were called Poem. Said Shealeen, "So I kept thinking about it, and I liked it, and I said, 'What if we did Poema?' It's a pretty name, and so we're like, 'Okay let's go with that.' And then later on we actually found out it means 'beautiful masterpiece' in Greek, or 'God's workmanship' or 'God's poem'. That's what the Greek root means. I think it's pronounced po-ee-ma, but we pronounce it po-eh-ma." 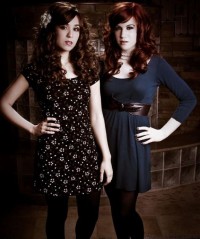 Elle spoke about the songwriting process. "It used to be that I wrote the songs. I wrote the song 'Feel The Same Way' and a lot of 'Blue Sweater', but as we've both matured as musicians, now it's always both of us. 'Cause Shealeen has so many good ideas for lyrics and melodies and stuff but then so do I." Shealeen added, "Usually I'll feel that she'll come up with a great chord structure, and then maybe even like a melodic hook, and then I'll come in and be like 'Oh, what about this and this' or 'let's change this'."

As their musical experience began to grow the duo dreamed of landing a recording contract. Laughed Shealeen, "I think we might have sent one press kit to Hollywood Records (the Disney label!). That's quite hilarious to me now. I doubt they actually listen to their demos. Anyhow, we got discovered on that Wake Tour we went on. A label rep from Tooth & Nail saw us in Dallas and we showcased to the label in Seattle within a month." A week later Brendon Ebel phoned the girls and offered them a recording contract. Said Elle, ""We were so excited, we could barely contain it. Tooth & Nail was one of the only labels I'd heard about growing up."

After signing with Tooth & Nail renowned producer Aaron Sprinkle (Thousand Foot Krutch, Kutless) was allocated the difficult task of recording Poema's bright and breezy songs of teenage love. Elle spoke to HM magazine about the recording process. "Being in the studio was one of my favourite memories of the past two years. It was great to be able to work with Aaron, we've admired his work for a long time and we're very pleased with how the CD turned out. We had been several studios before but working with Aaron was different. I felt like he respected us as artists and respected our opinions. And that is very important to me because I'm sure they can all tell you, when it comes to the music, I can be pretty picky, so I was very grateful to have a say in things."

Shealeen continued, "Aaron Sprinkle is so cool. He was so much fun to work with and he had so many great arrangement and instrumentation ideas. We all wanted the songs to have a bit of a bigger sound but still keep that organic acoustic vibe, so we had full drums, but we didn't use any electric guitars. Elle and I are both huge Fair [Aaron Sprinkle's own band] fans, as well as fans of so much of the stuff he's done with other bands. I can't even express how cool it was to be able to work with him. Live we still play with a cajon (a box that has a snare and bass that you sit on and beat) and we also have an acoustic bass in addition to my piano and Elle's acoustic guitar, but after Warped we plan to finally start touring with a full kit."

With the Veil Arms winter tour of 2010 Poema discovered just how hard life on the road could be. Said Shealeen, "In all honesty, that tour was a bit harder than anything else we've done so far, mostly because I was FREEZING the whole time! I just remember loading and unloading in the winter air, night after night. And we all got sick, it was just miserable. But we made some great friends on that tour, and I mostly enjoyed it! But seriously, I have learned you just have to push through it. Oh and yeah, one of our parents is usually on the road with us. It's such a different dynamic with our band. First of all, we're teenage girls, plus, our drummer (who is also our brother) is barely 15. So they just like to have our backs, you know? There are some crazies out there and we are in random cities, playing at venues in weird parts of town, many of which have bars. I don't know, I guess it would be different if we were a bunch of 22-year-old guys. But it's a unique situation I suppose."

When asked what God has been teaching the girls recently Elle was emphatic in her response. "To be patient. We're sorta waiting for a lot of things to come together and stuff. And it always does, but it always seems like it's at the very last second." Shealeen continued, "Even with the tour. 'Cause so much of our life revolves around what we're doing in music and stuff like that, so waiting on God has been hard. Like all these tours finally coming in and lining up in like the perfect amount of time. It's amazing." Elle added, "It's definitely been God's perfect timing for a lot of things that have happened. I'm starting to see that more and more as we keep going along with this, but we've only been doing this for about a year. But we're just learning so much. That's just one of the things we've been learning."

For more on Poema visit the Poema artist profile