With the release of their album 'Shawl' and a flying visit to the Greenbelt Arts Festival in August there's more than a hum going around on the PRAYER CHAIN. Jonathan Bellamy met up with the band. 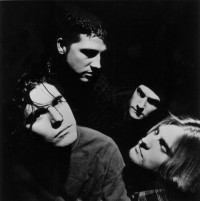 Crashing their way into Britain this year, care of the Greenbelt Arts Festival, came the refreshing assault of four Californian guys known as The Prayer Chain. In an industry where 'the top' is so often epitomised by 'picture perfect' pop and squeaky, silky soul, the emergence of a bunch of mud encrusted alternative rockers into the arena of highly marketable CCM has brought with it such a tonic of vitality and youth it's like sipping from the Holy Grail itself.

And what is the eternal life these sun-baked saints have brought with them...? Well, it's but two things - honesty and truth - and if you take more than an askance sniff of their lyrics you'll understand why. How many of us can relate to this heartfelt cry of doubt - "Can you hear me/Do you even know me?/I'm just like the rest/Need to stick my finger in your wrist." And when was the last time you felt completely at a loss and stuck in a desperate pit? Does this ring a bell? "Look at me, look at me/I cannot stand, I'm on my knees/Trying to rise above it/Just to wallow in it/I cannot cry about it anymore/Look at me, I'm calling/Look at me, I'm falling/Reaching out to the sea/To see the Ghost, to hear Him say, follow Me."

Indeed, many of the Prayer Chain's songs deal, in varying degrees of opacity, with the struggles of developing a fulfilling relationship with God. One thing there certainly isn't though is any glossy spiritual answers. As Tim Taber, lead vocalist for the band, explained to me at a sunny Greenbelt, "I think, as Christians, it's very natural for us to write about Christian themes although all of our songs don't deal with some outward Christian moral or ethic or anything. I think the fact that we're Christians, the life experiences that we write about are kind of like from a Christian perspective, and I think a lot of Christians that we play to identify with the lyrics. And non-Christians do as well because a lot of the songs are based on universal human trials or human searching that, whether you know Jesus Christ or not, you could be thinking the same thoughts or going through the same thing as the song portrays."

'Shawl' is the band's third and most progressive and expansive release following the 1992 'Whirlpool EP' and an earlier private recording titled 'The Neverland Sessions'. Of its 13 tracks none has been any better received than "Never Enough". Indie rockers love the crunching wahhh guitar solos; moodists love the haunting appeals towards the end; drop-in 'Christian' lyric searchers are suitably impressed with the constant referral to the 'blood of the Redeemer'; and radio jocks are very happy to combine the appeal of all three for a highly accessible and arresting piece of broadcast. A big hit in the US charts, it has also been receiving bulk play in the UK via the Cross Rhythms radio programmes. As Tim explained however, this is no praise and worship song, "'Never Enough' talks about how hard it is to accept God's grace. So in fact it's not like an inspiring Christian song, it's more like a struggle song. But, I think there're certain songs that we write that have a certain spiritual feeling to them. 'I Believe' (from "Whirlpool EP") is one that the first time we played it live there was just a natural spiritual sense about it and I think 'Never Enough' is the same way. It's the type of song where sometimes when we finish playing, and I almost felt it tonight (Greenbelt), there is, like, no cheering or anything because] everybody's just kind of, like, 'Wow!', you know? It's not like a light song, you know?!"

Tell me about it. Praying for the blood I of the Healer to fall on you to the sound of crashing chords and vibrant arm-flailing jams is far from light - but it is an extremely powerful way of| inducing spiritual goose bumps.

If influences from other artists are an indicator when trying to pigeon hole the Prayer Chain then they themselves would say that other CCM artists have done little to influence them! Instead, the likes of the Stone Roses, the Smashin' Pumpkins and Jane's Addiction would be high on their list and certainly 'Shawl' has a gutsy, rough feel to it. As Eric Campuzano, bass guitarist and key lyricist, described when clarifying the muddy 'frolic' on the inlay sleeve: "We wanted to do something earthy. Get down into the dirt from where we came and dig up some fun memories and imagery. Not that the record was really earthy though 'cause there was a lot of percussion and different sorts of things going on. (Shakers, tambourines, a poem| and even a cowbell!)."

And what about the 'Whirlpool EP'? Is 'Shawl' more earthy than that? "Yeh...| 'Whirlpool' was more, uh, watery!"
More rhythmic (fluid?) and lessl sampled 'Whirlpool' might have been but the interest it has created both in the US and abroad has been the foundation for the band's current popularity. And it's not like they've had to wait that long either. 31st October 1993 marked the band's third anniversary and, growing up in a musical climate that has tended to be less than balmy towards alternative Christian rock, you have to regard the progress of these Haloed Halloweenies as being a bit blessed. Within two months of forming 'out of the dust of other bands', they had put together a demo and sent it to the Reunion record label. But the break wasn't instant as Tim Taber recounted: "(After the demo tape) we played for another whole year and then released an album by ourselves (The Neverland Sessions'). It was six months after that that we got asked to sign a record deal (having) had conversations with Reunion for 10 or 11 months. So, it was something they didn't rush into. They flew down and saw us play a few times and we talked. At one point they told us it just wasn't going to work out, and then after we released our album we charted a top five single, 'I Believe', on our own, without a record company, and they were impressed by that and I think that led to the record deal."

It's a glowing testament that the band's most proclaiming track, "I Believe", should be the launch pad to establishing their musical career, sharing boldly and honestly as it does their belief that despite being unsure about many religious 'habits' they do know the love of Jesus Christ and they believe in truth. And what else do you need to carry you into what Eric Campuzano describes as "the big sea of colleges and clubs". More than that, invites are also coming in from outside the States - Greenbelt was one - and in December they are jetting to Germany for a night time Christmas rock festival. (There is a possibility too that they may play some dates in the UK, whilst here in Europe.)

So, as a live band, what do they offer? Eric summed it up as, whatever else it is, it must be "loud, heavy and rocking! We try to maintain a similar sound to our recordings but when we get up on stage our adrenalin rushes so hard that we play faster and louder, and I don't know if you could tell but we move around in certain ways that tend to prevent the perfect hitting of notes! For me personally on guitar, I miss so much stuff because I'm so busy flailing myself across stage. But it's more fun that way. I'd rather go see a show where a band was moving around and rocking and enjoying themselves and expressing their feeling for what they're saying in their music, than people up there who simply play perfectly."

And 'The Message!'? "We don't go into a show with, like, a preconceived agenda," explained Tim. "We try to be open to whatever God wants and try to listen to his voice and try to go by his Spirit. And occasionally there's a show where any one of us will talk for five minutes, and then there're other shows where we won't say anything at all."

Truth, that's the key. Nothing forced, nothing invented. As Eric pointedly told me, "Music doesn't last. Nothing lasts except what's really the truth."