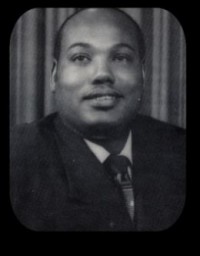 It's a strange coincidence that two people with almost identical names, Earl Hines and James Earle Hines, should be creative giants in their chosen musical fields. But whereas jazz pianist Earl 'Fatha' Hines (1903-1983) has been lauded and showered with awards and there are today dozens of CDs of his work available, gospel music pioneer Professor James Earle Hines (1916-1960) has been largely forgotten with a solitary CD, and that a Swedish release, to proclaim his huge contribution to the development of gospel music. Yet gospel historian Anthony Heilbut once labeled Prof Hines the first bona fide gospel superstar. In the liner notes to the various artists album 'The Great Gospel Men' Heilbut wrote of the singer and choir director, "When he performed, audiences could not contain themselves. Men and women ran into each other, people fell out of balconies. Ambulances were summoned; overwrought ecstatics collapsed. Male quartets began scuffling, trying to get similar responses. After such frenetic showmen as Hines or Brother Joe May, it became clear that gospel involved more than singing. If you didn't move the people out of their seats, into the aisles and - ideally - leave them flat on their backs, you had not scored." Although we charismatic Christians may wince somewhat at Heilbut's rather lurid description of Holy Spirit activity, one thing is certain, during the '40s and early '50s Prof James Earle Hines and The St Paul Church Choir Of Los Angeles over which he presided were hugely popular figures who helped shape the direction of modern gospel music.

Born in Atlanta in 1916, James Earle attended Atlanta public schools and participated in the musical activities of the churches, the city and the college community of Atlanta University and Spelman, Morehouse, Clark and Morris Brown colleges. Most of these activities featured Western European art and music. After high school he moved to Cincinnati where he attended the Cosmopolitan School of Music and later matriculated at Columbia University in New York City. After two years at Columbia he returned to Cincinnati and began directing local church choirs.

During the 1930s Hines was recruited by Dr L K Williams, president of the National Baptist Convention, to sing in a male quartet that famed gospel composer Lucie Campbell and E W D Isaac were putting together to travel to National Baptist Convention churches and represent the convention in song. Hines accepted the invitation and for several years sang with the Goodwill Singers along with J Robert Bradley and Thomas Shelby, among others. He received a thorough grounding in the changing styles of gospel at the annual National Baptist Convention. In 1946 Hines was hired as the director of the newly founded Echoes Of Eden Choir at St Paul Baptist Church in Los Angeles.

St Paul's was to become the biggest African American church in LA but when Rev John L Branham was assigned there he found no choir that could sing the exciting contemporary gospel music he'd grown accustomed to in his native Chicago. His choice of J Earle Hines as choir director and Gwendolyn Cooper-Lightner as pianist was inspired. Within months The Echoes of Eden Choir had grown to more than 100 voices. The rapid growth was, in part, due to the choir landing weekly radio broadcasts on KFWB (a Warner Bros station which reached 17 states). Remembered Cooper-Lightner, "People came from everywhere. We had people [celebrities] like Hattie McDaniels, Louise Beaver, Joe Louis. Nat King Cole was a friend of Rev Branham. People would crowd into that church on Sunday night. . . we started at 10.30. And they would come to early service like at eight o'clock to get a good seat." 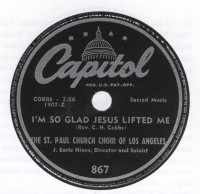 One of the early admirers of the choir was Jamesetta Hawkins who at the age of seven was receiving vocal training from Hines. Jamesetta was to grow up to become R&B star Etta James, who was to enjoy such hits s "The Wallflower" (1955), "All I Could Do Was Cry" (1960) and "At Last" (1961) before a decade-long battle with heroin addiction. In her autobiography Etta James, the singer recalled her early church days. "Everyone loved our church. We had one of the biggest, baddest, hippest choirs anywhere. . . Our choirmaster, Professor James Earle Hines, was my first and heaviest musical mentor, the cat who taught me to sing. Fact is, I wanted to sing just like him."

Renamed The St Paul Church Choir Of Los Angeles, the choir began recording in 1947. Both the record label and the manner of recording were surprising. Today music fans think of Capitol Records as the giant label who hit super big with Frank Sinatra in the '50s and the Beatles in the '60s. But in April 1947 Capitol set up their equipment at St Paul's to record the choir live singing a Thomas A Dorsey song, "God Be With You". Anthony Heilbut has suggested that St Paul's were "perhaps the first post-war gospel act to be recorded live." Capitol released "God Be With You" and its instant success overwhelmed the post-war R&B and gospel market ushering in hundreds more choir recordings.

Over the next three years Capitol released more than a dozen 78s by The St Paul Church Choir Of Los Angeles and had more hits with "Yield Not to Temptation" (featuring the passionate lead vocal of Ruth Black), "Look For Me In Heaven (I'll Be There)" with another powerhouse lead from Prof Hines and "He's A Friend Of Mine" penned by Kenneth Morris. Another Kenneth Morris song, "Yes, God Is Real", was a hit for Prof Hines with a small group (which included Ruth Black, Eric Gladney and Wilbert Pritchard) plucked from the choir. Using the name from his National Baptist Convention days, Hines named his aggregation Prof James Earle Hines & His Goodwill Singers.

Hines' emergence onto the gospel scene coincided with the appearance of Kenneth Morris who was to become one of gospel's most popular and influential composers. Originally a jazz musician, Morris became a publisher of gospel songs (together with Sallie Martin) and provided Hines and The St Paul Baptist Church Choir with many songs. Morris' lyrics had a "problem-solution" aspect that distinguished them from the other lyricists of the era. Morris' most popular song, "Yes, God Is Real", was translated into 24 languages. It is one of Hines' stronger performances, fervent and triumphant. In his book The Golden Age Of Gospel, author Horace Clarence Boyer wrote, "The song opens with a strong declaration of the inability of mortals to understand the universe and to survey all its wonders: 'There are some things I may not know/There are some places I cannot go.' The song then immediately shifts to an equally strong statement of confidence, proclaiming what people can understand and their joy in such knowledge: 'But I am sure of this one thing/That God is real for I can feel him deep within.'"

In 1948 famed gospel composer Sallie Martin became the director of The St Paul Choir Of Los Angeles while Prof James Earle Hines & His Goodwill Singers toured. In an interview with Opal Louis Nations, Ruth Black-Castille remembered, "We toured throughout the South constantly, appearing mostly at school auditoriums. We always headlined, local groups opened for us. Hines was good to us and he got along well with everyone." The New Goodwill Singers stayed together for four years and recorded at least 45 songs for Sacred Records in Los Angeles. However, through a myriad of business deals, the recordings ended up on such labels as Music Master, Metro, Rex, Gotham and DeLuxe. In his sleevenote to the 'Jesus Steps Right In' compilation Per Natini wrote about the Goodwill Singers recordings: "The performances, that in some instances seem to have been recorded in church halls, often had a live feel. There was an increasing intensity of emotional involvement from start to end. The singers took to spontaneous handclapping in the fast songs. At some sessions the group was reinforced by a bass player, who was place close to the microphone, adding a jazz touch."

A key element in the Goodwill Singers' sound was the lightly swinging piano playing of Gwendolyn Cooper-Lightner. It established a definite "sacred" piano style. Gospel composer/publisher Eugene Smallwood maintained that Cooper-Lightner was "the one who put the 'ump' into gospel. Others played it as they saw it, but she's the one whose fingers interpreted the soul of the gospel music. She's the queen of gospel when it comes down to playing." Later in her career (in 1957), Gwendolyn and director Thurston G Frazier formed the nationally known Voices Of Hope Choir, which toured extensively around the USA and made two LPs for Capitol. Then, from 1968 to 1972 she served as Mahalia Jackson's accompanist.

After a session with Modern Records, in 1951 Hines And His Goodwill Singers were recording for Specialty Records but only four sides were released of the 12 recorded. One, "Wait 'Til My Change Comes", was a version of the much loved "All Of My Appointed Time".

When the Goodwill Singers went their separate ways Prof Hines still made occasional sorties into the recording studio. In 1955 he made the single "The Lord Is On My Side"/"I Found Something" for Money Records. And a couple of years later, along side a bunch of other gospel luminaries like Mahalia Jackson, the Roberta Martin Singers and James Cleveland, Prof J Earle Hines was chosen to appear in a series of concerts held at New York's prestigious Carnegie Hall. Famed producer John Hammond even called Hines "best male singer" and the English Vogue label released some of Hines' recordings. But by then Hines had stopped recording and died on 5th September 1960 in Cleveland, Ohio. He left behind a body of recorded work which has been scandalously ignored by CD compilers. Here's hoping that will be rectified in the years ahead.

I grew up a bit farther south of St. Pauls, around Century and Figueroa...In 1949 I could drive so other kids and I would go to Echos of Eden after church...Loved the music and still do...today's church music doesn't get it. My first date with a cute redhead girl who became the love of my life was to Echos of Eden...We married later and stayed that way for 66 years and 8 months...She contracted ALS and left me for Jesus in 2010...so we're separated...but we'll be back together soon enough...praise God...

In the 50s, after our own Sunday evening church service, we'd pile in our cars and race to downtown L.A. to get a seat and hear the Echoes of Eden Choir. We couldn't get enough!

It would really be great if there were some recordings of that group available today! Love to hear that music again.

I grew up going to the Sun. 11pm broadcast, we started when it was still in the little storefront church. My Mom is now 95 and I would give anything to be able to get some of the records of that era---Cora Martin, Sally Martin-----Charlie Tramell Any chance you could help me.