Project 86: The big mainstream deal isn't all it's cracked up to be say Californian hard rockers

Tony Cummings reports on Orange County rockers PROJECT 86 who signed with Atlantic Records and found nothing but ashes. 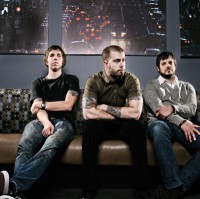 When Cross Rhythms spoke to Orange County hard rockers Project 86 in 2000 the band were hoping to "do a P.O.D." and make a dent in the mainstream via Atlantic Records' distribution of their second and third albums 'Drawing Black Lines' (2000) and 'Truthless Heroes' (2002). As it turned out the "nu metal" bubble burst and the band were dropped by Atlantic. But rather than folding, Project 86 (who consist of vocalist Andrew Schwab, guitarist Randy Torres, bassist Stephen Dail and, until his recent departure, drummer Alex Albert) battled on and returned to the Seattle company which had given them their start, Tooth & Nail/BEC Recordings. The break from Atlantic Records was not easy. Andrew Schwab wrote in HM magazine about his memories of the traumatic parting in early 2004. "Not very long ago we parted ways with our labels, and our manager, and we have been forced to take many months off the road. All of the hype about our future successes turned out to be just that - hype. Things did not go as planned, and as a result we have lost much in the way of momentum. We did not go platinum. We did not even sell 100,000 records with 'Truthless Heroes'. Though we did land several major tours, the record fell short of expectations and did not come close to the impact of our previous effort, 'Drawing Black Lines'. There were many reasons for this, of course, and we were given the music biz laundry list which included: timing, corruption, politics, 9-11, The Donnas, etc. That golden ticket we thought we were grasping in that Manhattan high rise just a few months ago was torn away from us just as fast as it was given."

Despite all the expectations that Project 86 would fold, the band continued. Schwab wrote, "Obviously, our band did not break up. In fact, after hitting our lowest point we began an eye-opening and pretty humbling climb back. We released two records since 'Truthless Heroes' and re-signed with Tooth & Nail Records. Our most recent release '. . .And The Rest Will Follow' is a record that is a reflection of a hard fought journey. It encapsulates a realisation of the renewal that a relationship with God brings: hope and purpose. It has come slowly, over the course of the last couple of years, as God began to refocus our goals and re-ignite the passion of our calling. He began to show us ever-so-gently the foolishness of our faithlessness.

"More people are coming out to our shows than ever before. And though we don't have the major label hype surrounding us as we did at one time, I believe that we have finally figured out who we are. Of course, as God continued to heal us, we swung between hope and guilt, desperation and despair, but inside that journey I realised he has never given up on me. On us. He never left us. He has held onto us and humbled us to truly use us. Not just the band Project 86, which I believe means little to the Lord in comparison to the people inside and outside of the band. That's a message you cannot take lightly. You may miss out on a dream or two along the way in order to gain Christ. I look back at the hardest chapter in our band and I realise the things I needed to learn. I needed to learn that despite circumstances I must remain faithful, because he is faithful, and I have learned that I must forgive. . .myself and those around us who let us down."

In 2007 Project 86 released 'Rival Factions', generally acknowledged as their most diverse project ever. Said Andrew in an interview with John DiBiase, "We don't want to make the same record over and over again. We have done plenty of typical 'Project' heavy songs and we can write those songs in our sleep, believe me. We didn't necessarily intentionally set out to do something different, but the fact that it came out that way is really cool to us because it's exciting. Six albums deep, you have to evolve and you have to push yourself to keep it exciting and that's what we did on the record for sure. Now again, you did hear the more extreme versions of melodic songs. If you think back even to '. . .And The Rest Will Follow', a song like 'Something We Can't Be' is a lot different than a song like 'Sincerely, Ichabod'. So you're getting the 'Something We Can't Be''s and 'All Of Me''s first. There are some songs on this record that I would say are more hectic and crazy than anything we've ever done."

Andrew went on to explain the intriguing 'Rival Factions' album title. "When it comes down to choosing album titles, at least for us, we just make a master list of all kinds of stuff. And then out of that come a few that we like. And then out of that come a couple that we vote on. 'Rival Factions' seemed to encompass, from the spiritual standpoint, the tension that exists in everybody between the two opposing poles. In Christianese, it's the flesh and the spirit. That's sort of the spiritual interpretation, but the sonic interpretation is: We wanted to sort of polarize ourselves away from all the predictable, heavy music today - and even the "box" that people say 'this is what Project 86 sounds like'. So if we can do something different just as well, and make a sort of confrontational statement even about what people think we are, we think that's cool." 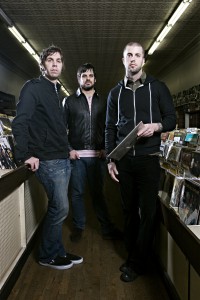 One of the outstanding tracks on 'Rival Factions' is "Evil (A Chorus Of Resistance)". Said Andrew, "That was actually the first song that we demoed on this record. Steve wrote the jam. The vocals and everything came together pretty quick. There's this kind of little thing that happens within the band that any time there's a real cool song and it's finished, I don't hear it. So I'm just like, 'Yeah, that's alright.' And then Randy and Steve heard it and were like, 'Y'know what man? This is cool.' So we show it to a couple of other people and they're like, 'This is really cool!' So that's become kind of one of the main songs. I think it's got an immediate energy. It's a little bit more accessible, but the chorus is still pretty aggressive. It's a different sound. We definitely wanted to try some different sounds on this record, and we were able to do that.

"I guess the key line in the song is 'Deep in the recess of every man is a thief, a robber, a criminal.' That whole concept. It's just saying that we're all on an even playing field - Billy Graham or just a destitute person searching for something. We are all equipped from birth with a hole in the middle of us that can really only be fulfilled by one thing. And the song sort of outlines striving to meet that hole by everything and anything except that and ultimately coming back to the realisation that you can only be fulfilled in one area and that's God. And that's kind of the theme of the album as well."

Another fine cut is "Molotov". Explained Andrew, "That song is kind of expanding on that idea. It's looking at night life culture, dance club culture with a little '80s twist on it - I tried to paint some imagery of the sort of indulgent new wave atmosphere that was 20 years ago that's sort of recurred now. And sort of the emptiness of that - living from the hours of midnight to six am. And how, essentially, when the party ends and you're alone with yourself, how empty life can be when you live for that thing. The chorus is, 'I've swallowed it all, but I could never be full. And now they call me a fool for leaving.' I've tried all that. It doesn't work."

Thanks to Project 86's experiences in the general (secular) market, Andrew's views of CCM acts obsessed with finding the mass market are fascinating. He said, "Obviously, I don't believe wanting to grow from the Christian market into the general market is inherently wrong. It's definitely right, as long as your motives are pure. God tells us that if we submit ourselves to him he will give us the desires of our hearts. We just can't make the desires of our hearts ends in and of themselves. It's a different age in the music industry than when we began this band 10 years ago. Somehow, we have survived it because of a plan that was greater than ours. And in the process of figuring that out, with God's help we were able to do something we loved, sell 300,000 records along the way, and inspire many, many people. Not bad.

"Today I just love playing. I love doing what I do. I love the people who come to our shows, who buy our records and I try my best to never take the people lightly. It is about people, in the end. Not being cool. Not selling records. I watch so many bands around me (and believe me there are many - too many, if you ask me) and most of them sound like the same band saying the same things I said not that long ago. They don't want to be in the Christian market, they don't want to play Christian shows, they want to be in the 'general market' because of credibility or business or sales. And they put success as the end-all be all. I hear these conversations every week from artists who have found more success in the Christian industry than we ever did, and I can't help but get a familiar painful feeling that takes me back to when I was saying those same things. All I can say is take heed.

"Though it seems like there is a big difference between career goals and spiritual identity in the entertainment industry those lines can become blurred. And your career is very short at best. You may not even be remembered even if you sell tons of records. What you will be left with later in life is yourself, the decisions you made and your motivations. I am not telling you how to run your band or what to believe about music. I am just telling you that people are more important than perception. Loving others is more important than career success."

Sometimes the Holy Spirit allows us to go through sich experiences so that we can share our testimoniesand declare the victory of GOD. Whatr God starts no MAN can stop. The so called major players in the music industry will witness just how powerful our Lord is and we are not taking dollars and cents but the transfoemation of lives around trhe globe. Tell the group to remain encouraged. i know I have a difficult task getting my songs to be sung by mainstream artists and the more Iam rejected the more God is exposed through me as His servant and vessel. check out our site www.hismultimediaintl.com