Q: An overview of the mainstream music magazine 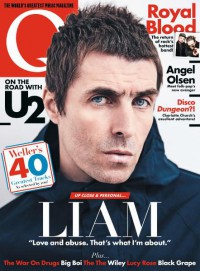 Q magazine was started in 1986 when its founders Mark Ellen and David Hepworth noted that none of the UK's existing music publications were targeting older CD album buyers. 32 years on Q continues and although its days as Britain's bestselling music monthly are now behind it (Mojo, Classic Rock and Uncut all today sell more than Q's 44,000) Q still has many loyal readers.

The Summer issue of Q sported a cover story on Liam Gallagher who, as every Oasis devotee will know, has just released a single with an album imminent. Also in the issue was a long piece on the best band in Brighton - no, not Army Of Bones - those raw rock hitmakers Royal Blood; a fascinating travelogue-styled piece on British pop singer Lucy Rose who has discovered there is a devoted following for her music in Chile; a feature on Black Grape graphically recording the drug taking excesses of Shaun Ryder and Paul Leveridge; a depressing (to me anyway) profile of Charlotte Church showing that she's come a long, long way from the Catholic girl who beguiled millions with her "voice of an angel"; a piece on "St Louis finest songwriter" Angel Olsen; and an interview with Matt Johnson who is making a comeback 17 years after the success of The The. There are also smaller features on rapper Lady Leshurr; London band Pumaros whose occult-themed album 'The Witch' is "a brilliant debut"; Philadelphia's The War On Drugs, succinctly described as "Springsteen goes psychedelic"; and singer/songwriter Marika Hackman.

The one article likely to interest Cross Rhythms readers was about U2 revisiting 'The Joshua Tree' in concert in Vancouver and Seattle. It was a fascinating review as was the chat journalist Stuart Bailie had with Bono and Edge. The U2 frontman talked about his February meeting with US vice president Mike Pence in Munich during which time Bono lobbied for continued Aids relief abroad. Said Bono, "Friends fell out with me over meeting Pence. And I said, 'It's kinda my job, y'know? Working with people that you don't look good in a photograph with. It's a small price to pay.' Bono also said he was looking forward to touring with Noel Gallagher ("he's the songster") and raved about the "unbelievable" new album by Kendrick Lamar on which Bono features as a guest vocalist.

Q's renowned review section isn't as large as issues past and there was only one - the Sufjan Stevens, Nico Muhly, Bryce Dessner, James McAlister album - of any particular interest to Cross Rhythms readers. Q also runs a Choice Cuts page where the Q staff and writers offer their "tips of the month". Reviews editor Niall Doherty raved about the Alt-J album and the Radiohead 'OK Computer' re-issue; features editor Ted Kessler enthused about Bastien Keb with "a sound that sounds like The Delfonics covering Bon Iver" (now THAT does sound good) while others wrote about the books and TV series they are currently enjoying. As with each issue Q closed with its Last Word page where the "Godfather of grime" Wiley was headed with a pulled out quote: "London is a windup. You can't park nowhere, you can do sh*t."

The Wiley heading reminded me why I am no longer a regular Q reader. The magazine seems to have an editorial policy that if an interviewee swears, the phrase (or in habitual swearers like Liam Gallagher's case, one of the phrases) is made a pulled out quote to draw the reader in to read the whole interview. Now I know there is an ever-increasing tendency within the Christian community to tolerate swearing (note the enthusiastic review in Christian magazines of the Stormzy album which makes no mention of the grime man's frequent use of the f-word.) But even the most liberal emerging Church adherent would wince at some of the tirades documented in Q.