QUENCH's debut album is to be released on Elevation Records in March. Aleem Hossain caught up with guitarist Mark Cocks for a sneak preview. 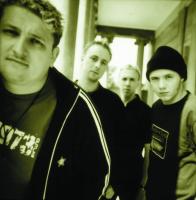 Back in an earlier era of Britain's tiny Christian music scene, there only seemed to be room for one pop rock front runner. In the '90s it was folk rock team Eden Burning who dominated the gigging circuit and more recently Delirious? have been Britain's big timers. But slowly and surely other bands - Kato, Psalmistry, Kindle, Steve, Bottlerockit/Audiogene, Superhero - have shown that if they're not up there with the d:boys, they can at least grab and retain their own pockets of supporters and bring much needed diversity to the festivals and CD racks. Since their formation in 1999 another band too have worked tirelessly in Britain, building up their own support base while communicating spiritual truth. Quench, with a combination of loud guitars, infectious grooves and harmony-laden hooklines, have proven to be popular crowd pleasers. Considering the band's sound, which they describe as "Blink 182 meets Barenaked Ladies," the band's genesis is rather surprising. The band grew out of popular festival outfit Why? who, fronted by Ant Parker, played a kind of punk-tinged-folk music which seemed to revel in 200 mile-an-hour jigs and reels. When Parker left, the rest of the musicians continued on, with keyboards man Jamie Hill taking over the vocals. Toward the end of 2000 the band's original bass player had left to take a jazz music degree and Ron Knights (who had previously played with Dave Bilbrough) was drafted in to the band, now sporting the name of Quench. In the summer of 2001 the band recorded their first release, an EP for ICC's Elevation label. New Wine saw the band introduce their new guitarist Mark Cocks, replacing Kevin Sefton. Mark has a reputation as one of the best guitarists on the UK scene having previously worked with Ripcord, Psalmistry and Josh Doyle (the former frontman of the hitmakers the Dum Dums). And so it came to pass that the new, improved Quench began work in December 2000 on their full album debut, tentatively titled 'Afterglow', the album, produced by Trevor Michael and Dave Lynch, is set to be released in March.

I began by asking new man Mark Cocks what he hoped Quench would achieve. "My own personal hopes for our music is that it will be an encouragement to Christians who love rock music but find it hard to find many bands that have something positive to say as well as making great music. When I was in my late teens I was really into bands like Guns N' Roses, Skid Row, Metallica and Motley Crue. I was so into their music that I used to hang off every lyric and would read interview after interview to get their opinions on life in general." He continues, "As you can imagine, these weren't always the most uplifting viewpoints for a young Christian to be immersed in and it did affect my attitudes. I wanted to please God, but at the same time none of the so-called 'Christian alternatives' even came close to my favourite bands. It wasn't until I heard 'Jesus Freak' by dc Talk that I realised Christian music really can be amazing, lyrically profound and well produced. I hope this new Quench album sounds great musically so it really is a realistic alternative to your average Kerrang TV-type band but with lyrics that really encourage, challenge and inspire people to get closer to God."

Figures suggest that more and more young people are leaving our churches. So how do the band intend to get attention and time from an increasingly disgruntled and restless youth? "I know that there are a lot of people who would never go to an evangelistic event and who have lost faith in politicians, parents and teachers," admits Mark. "Some people look for meaning in music and from the words of their favourite artists. Thom Yorke and Bono raised the profile of the Jubilee 2000 campaign in a way politicians never could. I hope that as people listen to our CD they will see the stories of four ordinary blokes who have been given a new life and a hope for the future through a relationship with Jesus. Our lyrics are honest and real; we wrote about our struggles as well as our joys. Talking to a lot of people, I find that they don't want Christian music to be gushing, superficial warmth and fluffy joy. We all know that life can be hard and when we are really on fire for God that is often the time when the enemy throws everything at us. Like most bands, our songs talk about the realities of the ups and downs of life, but the difference is that where many bands choose to fill their songs with a kind of manufactured designer misery, Quench songs always have a light at the end of the tunnel, because we trust in God and know that he will see us through."

You'll often hear me moaning about mediocre, heard it all before, Christian rock, so in what ways is the forthcoming album going to be a standout? Mark describes, "We hope this album will appeal to so many people as there really is something for everyone. It really rocks but at the same time there are melodic hooks that will have you singing them in the shower for weeks." He laughs, "We always know if we are on to a winner with a song if we catch Trev [the producer] singing them to himself accompanied by some passionate air-guitar playing!" 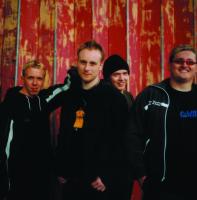 He adds, "Seriously, though, we hope this album will be loved by Christians who find it hard to find rock albums with uplifting, honest lyrics. The market place is full of great Christian pop bands like Delirious? and awesome heavier bands like P.O.D. and Blindside, but there isn't really very much in the middle for Foo Fighters fans like us. Enter Quench! This girl came bounding up to us at the end of our Soul Survivor gig and said, 'Thank you for being Christians who play this kind of music. We love it and no one else is doing what you do.' At the writing process I said that I wanted us to make 'Jesus Freak' for the 21st century. We aimed high, and you guys will have to be the judge of whether we got close."

For more on Quench visit the Quench artist profile