ROY3LS: The new girl trio with the radio hit "Stampede" 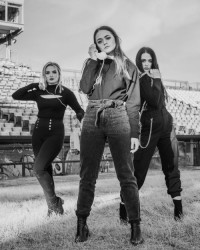 Nashville-based ROY3LS have hit with the single "Stampede" which is being played across Cross Rhythms/xRhythms radio. This in itself is a phenomenal achievement, as you can count on one hand the number of artists whose debut release gets radio play, even on local stations or internet radio. The group consists of three sisters Destini Rose aged 22, Stefanie Lynn aged 21 and Faith Ann Marie aged 18. The trio spoke to Cross Rhythms' Tony Cummings about their music and being brought up in a Christian family. Destini said, "Our dad was a pastor and so we got the amazing blessing of being able to grow up with parents who trained us up in the Word. We all love Jesus and mom and dad really encouraged us in our own walks with the Lord."

The group has been together for over a year with their brother Doran Robin producing their music and helping to write songs. Doran has testimony about overcoming leukemia as a boy and does a lot of work with the charity Make-A-Wish Foundation. Destini spoke about ROY3LS' early years. "We've been doing music together individually for years now. As far as coming together as a group we started about a year ago now. It's been just an incredible experience, we've had so much fun being able to work on music all together and pursue this as a team." Stefanie added, "The biggest thing for me has been doing something that I love with the people I love and being able to connect and impact with people who are actually in the industry, who maybe don't get ministered to because they're the ones giving out."

"Stampede" is ROY3LS' first recording. The sisters were asked if they were surprised that it was playing on UK radio. Destini responded, "It's very exciting and fulfilling to be able to hear that, it just gives you motivation and is very inspiring. We're just very, very thankful."

Faith, the youngest of the three, was asked about working with her brother on "Stampede". "Doran Robin is very, very talented and he pours his heart and soul in to every project he works on. It's been amazing to watch him grow, he just pours out to every person that he gets to work with. It's a blessing to be able to work with him for sure."

Since the release of "Stampede" in August ROY3LS have issued the singles "Souls" in September; "Be Somebody" in October. Now Radar Talent Agency have issued the girls' Christmas single "It's Christmas". Speaking about their Yuletide offering Destini said, "We were looking around and listening to Christmas music that's playing already before Thanksgiving. We realised that the real meaning of Christmas is Jesus and it gets lost in a lot of our modern perceptions that everyone is trying to run around and get the check list done and everything. We just wanted to bring the focus back to the Lord." Stefanie couldn't help but add in how she felt about Christmas music and Santa Claus. She chuckled, "We didn't grow up ever believing in the Santa Claus thing and so I was always that kid who ruined it for my friends. Our song is more about the real Christmas."

The opinions expressed in this article are not necessarily those held by Cross Rhythms. Any expressed views were accurate at the time of publishing but may or may not reflect the views of the individuals concerned at a later date.
About Chloe Ashworth

Chloe Ashworth is a photojournalism student at Staffs uni and is interested in social issues.