Ralph Van Manen: "the Dutch artist with most potential for international popularity"

CCM has become an international musical language and showing that Holland can produce artists of the highest quality comes RALPH VAN MANEN. He spoke to Jan Willem Vink. 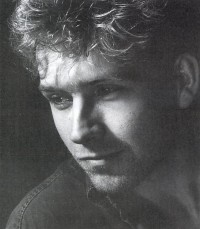 Without a doubt, Ralph Van Manen is "the Dutch artist with most potential for international popularity", as I stated before in my article on the contemporary Christian music scene in the Netherlands. Throughout Europe people are discovering the fine talent of this honest pop/rock-artist. Therefore, the success of his CD 'Face The Feeling' doesn't come as a surprise.

For years, Ralph was singer/pianist in the Dutch symphonic rock band Target. Target was the most popular non-professional band in the history of Dutch contemporary Christian music. Right after their start in 1988, Target won the new bands competition at the Dutch Flevo festival. Their privately released debut Target' was quite successful in the Netherlands and soon the band was playing all over the country, including main stage at major events like the Dutch Flevo festival, the bi-annual 'Gospel march', a showcase for Dutch talent and the Christian Artists Seminar. Target was also featured on Christian radio and television in the Netherlands. Ralph remembered his days with Target with affection.

"It was a nice group together," Ralph told Dutch magazine Bottomline. "Very Dutch, very cosy, having a nice time playing together. Something happened, I have no explanation for the unprecedented success. Maybe it's because we played in a time where nothing was happening on a musical level." Target came to a close in 1992. Their final concerts were recorded before an audience of thousands of people, resulting in the live album Tot Zover' ('So Far').

During his time with Target, Ralph released a solo single called "Open Up", which showed his heart for pop music. After Target disbanded in 1992, Ralph started working harder on his solo career, which resulted in the release of "Face The Feeling' in early 1993. 'Face The Feeling' showcases Ralph's love for a blend of melodic pop, rock and ballads. Ralph collaborated with songwriters like Henk Pool and Paul Field. On a musical level 'Face The Feeling' is definitely a European album, with musicians from the Netherlands, Great Britain and Germany. Listening to 'Face The Feeling', it's no wonder conservatory pianist Ralph quotes artists like Peter Gabriel, Toto, Crowded House, Michael W Smith and Phil Collins as his favourites.

"This record is a result of a period of growth for me," said Ralph. "I was able to grow musically and spiritually to produce a good album. I am a musician and I want to be able to make a good recording, but besides that I want to tell our listeners something about my faith in Jesus Christ. But this is not a 'gospel CD' because it only contains overt Christian material. There are songs about love, my wife and politics. But as a whole this album reflects my attitude towards God and life. And what God has done for humanity.

"You hear people say so often they want to evangelise," continued the 28-year-old singer from Veenendaal. "But most of the time that's very vague. I think your attitude and the way you treat other people are fundamental in what you communicate. It is so easy to tell a nice story. Being a Christian comes down to what you do, even in your weakness, when you make terrible mistakes, that in the middle of that you are able to reflect God."

Talking about being able to grow as an artist in the Netherlands, Ralph said, "You have to do it with your band. You can't do it because you get the time and opportunities to develop, but because you have a strong will to do it. It's hard labour and you can't earn jam on your bread. But I believe that when I continue to do what I do, it will happen at a certain point. Maybe, it's within 10 years, maybe 20, but we go on. Even if we have no jam on our bread! We feel it's good and important to do what we do. We enjoy doing this so much. There are so many things that can prevent your album from being successful. For the most part, you can't do anything about that. I don't bother with that anymore. We try to do our best when we are recording and performing. More and more I get the idea that if God wants to do something with our music, we eventually will be able to find a larger audience."

This attitude is new for Ralph. He talked about the changes in his life that have taken place in the past two years. "Because everything has developed so quickly and because people are expecting things from me, I changed, meaning, you have to perform and you become something you are not. Then all you've got left is yourself. That scared me a lot, I suffered a lot from intense fear. A lot of things from my youth came back. I had the feeling I had lived part of my life without even being aware of it. I'm happy that's happened. I've started growing as a person. I'm more involved in living out my faith and music has decreased a lot in value for me. Now it's only relative when something goes wrong. It has less value. Everything had to be perfect before. If something goes wrong, it goes wrong. I am human and I do my best. I can't expect more. I can give what I've got. I can use my talents totally. But it isn't wrong to show weakness."

Ralph stated he doesn't think it's too difficult to be vulnerable and open. "I talk about my mistakes, my failure and characteristics that are not so great. I find it a lot harder to accept myself as I am. To be myself on stage. If you play theatre, people will discover that."

This no pretence attitude also comes across in Ralph's unplugged concerts, where he's only accompanied by guitarist Robert Riekerk and vocalist Tommy Riekerk. Up until recently Robert and Tommy played in a Dutch band named Who Cares, which they left to be able to sing with Ralph. They both contributed to Ralph's CD 'Face The Feeling' as well. Said Ralph, "I had to get used to playing unplugged, because I discovered technology in the studio. But it's so pure and it feels so good. Just the old idea, playing guitar beside a camp fire."

Ralph thinks this will also come across on his next album, for which he is currently writing songs. "Regarding the music, I would like it to be more pure, more real, not so polished that it's perfect on every side but misses emotion. I would like it to be as real as we are talking here now. That it comes that close. That's the most important thing of music and what I have to say."