It's pleasing to see that though in the autumn of his years, gospel crossover man Rand Allen is belatedly getting fresh recognition in the US. In recent years Rance has guested on albums by Kirk Franklin, John P Kee and Bishop Paul Martin while the Rance Allen Group's latest 'The Live Experience II' is high on the US Gospel Charts. Rance and his brothers contributed hugely to the development of modern gospel music and the recordings he made in the '70s for Stax's Gospel Truth label, with their pioneering cross fertilisation of black church traditions and mainstream R&B sounds were vital in laying down the stylistic template for the Kirk Franklins and Mary Marys of subsequent decades.

Throughout his five decades of gospel ministry Rance has overcome numerous obstacles, always striving to keep his focus on Christ. He told Cross Rhythms, "Now that I look back on it there were some real blocks that were difficult to get over. What made it possible for me to come on through was that I kept in mind my goal. I kept in mind that this was something God had mandated that I do, and when you're mandated to do something you have people who don't want it. You can get your feelings hurt, you can feel a little down but one thing is for certain: if you make it your business to do what God mandates you to do, it will get better."

One of a dozen children, Rance was born on 19th November 1948 in Monroe, Michigan (about 30 miles from Detroit). Very much a child of the church, he was raised in the exuberant, musically rich atmosphere of the Church Of God In Christ. Rance credits his mother as being his greatest influence. He said, "She was a singer, a musician, she played the piano and the guitar. Her name was Emmapearl." At the age of four Allen told his grandmother that he wanted to be a preacher and gospel singer. He told gospelflava.com, "My grandmother took me seriously and had me before the public at age of five. I was ministering and singing in Ohio by the time I was seven. I had monumental influences in the church. I wanted to preach like Elder Barksdale, our District Superintendent. As a little boy, I used to love to just watch this man preach, he had an ability to not only mesmerize with his words, but also with the way that the presented his words. It was a treat even at the age of five. We were raised in a family where you went to church every single night. To keep our interest, my grandmother went to a pawn shop and bought instruments, drums, guitars and amplifiers."

Allen began to play piano at the age of seven and picked up the guitar two years later. His grandparents booked him and drove him to his engagements, but he once told liner notes writer Lee Hildebrand, "I didn't have a life like most kids had. I wasn't allowed to go out and play baseball with the guys and do the things a kid does. After I found out that this preaching was all work and almost no play, I started to slow down a little bit. I didn't get back into things again until the age of 17. That was when I decided all over again for myself that I wanted to be a preacher."

Rance's older brother Tom developed an interest in piano, then later in drums, with his younger brother Steve focussing on singing and the bass guitar. Another brother, Esau, put his energy into drums. Remembered Rance, "[The Rance Allen Group] would play in church every night, and we soon noticed that there were some young kids who although they would not come into the church, would always be outside dancing to the music. Our gospel always did have an R&B influence.

"Larry Giles, the assistant manager of the local music store, took an interest in our music. Also, about that time, Edwin Hawkins had his hit 'Oh Happy Day' all over the radio. One day I was playing along with the radio, singing, in the music store, and I kind of got carried away with it. I was doing a little number on the lead. Larry came up and said, 'Man if you ever decide to do something with that talent, I would be more than willing spend my money to take you to the next level.' So I talked to my brothers about it and we decided to go for it. Larry Giles became our manager and we signed to Reflect, which was his own label."

The Rance Allen Group duly recorded the single "Let's Get Together And Love" with the flipside an unlikely cover of a song "First Day In Heaven" by the Southern gospel icons the Blackwood Brothers. With little distribution the single didn't sell. But in 1971 the band were to come to the attention of one of gospel music's seminal behind-the-scenes figures, Dave Clark. In the '50s and '60s Clark was promotion man for Houston's Duke/Peacock - a company with a vast gospel music roster - as well as becoming a prolific record producer and occasional songwriter. A radio station in Detroit were organising a talent contest with a first prize of $500 and Clark was one of the judges. Rance and his brothers performed a searingly soulful version of the much loved Sister Rosetta Tharpe oldie "Up Above My Head" and walked off with the prize. Clark duly introduced the Group to record producer Toby Jackson. Jackson was able to convince his father, Dr Clifford Jackson, to finance a session for the group in Detroit's Pac Three Studios. Recalled Rance, "Jackson took us into the studio and we cut eight songs all at once. It took just four and half hours. Then he and Clark shopped that album around to several labels." 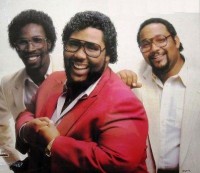 The album they recorded there, 'The Rance Allen Group', was a revelation. There was their transfixing version of "Up Above My Head", a powerfully soulful "Everything Is Gonna Be Alright" and, most attention-grabbing of all, a gospelisation of the Temptations hit "Just My Imagination (Running Away With Me)" with Rance transforming it into a song about salvation with a jaw-dropping vocal which ranged from a storefront rasp to stratospheric displays of falsetto. Jackson shopped the master tapes around. Remembered Rance, "Motown liked us, but they weren't doing any gospel. So we went to Memphis to talk to Stax Records. Al Bell who was VP there at the time, heard the music and said 'there's got to be some kind of way for Stax to have this group'."

Stax formed a gospel subsidiary label Gospel Truth, initially run by ex-Chess producer Gene Barge and Mary Peake, and released 'The Rance Allen Group'. The first single from it, "Just My Salvation", created a buzz. Gospel Truth began placing the trio on secular bills alongside Stax's soul stars to expose their new style of gospel. "I had reservations about it," Allen told Hilderbrand. "I prayed about it and found that my answer was 'Yes, you should play anything you get, Isaac Hayes or whoever, you should play it.' The first thing they put us on was a great big coliseum thing with Isaac Hayes. It was the first time we had played before an audience that big - something like 12,000 people. We lit up ourselves and lit the audience up too. It was a new experience for us."

Considering his huge size, Rance demonstrated that he had developed an amazingly energetic stage presence. Wrote gospel historian Bil Carpenter, "The Rance Allen Group's performance was electrifying. Allen employed some of Chuck Berry's guitar tricks such as shuffling across the stage as he ferociously played his guitar behind his back. With such theatrics and the group's powerful voices, the audience was always happily exhausted after a Rance Allen Group performance."

The Group's single "I Got To Be Myself" became their first bona fide hit when it reached number 31 on the R&B chart in 1971. They followed in 1972 with the LP 'Truth Is Where It's At', which featured their awesome take on James Cleveland's "That Will Be Good Enough For Me" and the Group's fine version of the chilling Mighty Hannibal number (originally recorded by Delia Gartrell) "See What You Done Done" - a mother's lament for her son who's returned from Vietnam a junkie ("I saw my son the other day/He took some money from my purse/That's when I knew/His habit had gotten worse.") But the most attention grabbing track was the opener "There's Gonna Be A Showdown" where an R&B dance hit by Archie Bell & The Drells was transformed into a church-wrecking exhortation of heart-stopping intensity.

The Rance Allen Group, along with the rest of the Stax/Volt/Gospel Truth roster, appeared in the WattStax movie filmed live at a huge concert in Los Angeles' Coliseum. But with Stax undergoing ever increasing cash flow problems and the taxmen mounting an investigation against the company's executives the Rance Allen Group were increasingly reliant on church congregations to pay them a wage. And that was problematic, as Rance explained to Black Music magazine in May 1975. "Doing gospel can be a trip. They'll say, 'God is going to bless you,' then give you 50 per cent. People began to think we were a big successful group, but we were all still holding down regular jobs - as we still do today - playing our music at weekends. When a church called us up, they'd say, 'Well Rance, what are you going to charge us to come to our "little" church?' Emphasis on the "little", you know? So I can't say anything, how can I put a price on the church? They usually give us a percentage of the collection, or raise a special offering amongst the congregation. So there's no telling what you're going to come out with. They get to us by saying that we got our start in the church. Which is true. But we still have to eat too. And take care of our families. And you can't do that by someone saying, 'God is going to bless you.'"

The Rance Allen Group continued to broaden their appeal. Their third album, 'Brothers', cut in '73, contained the usual exultantly passionate wailing on such numbers as "He Will See You Through", "Thank You Lord" and "We're The Salt Of The Earth". But in addition to the aggressively funky rhythm tracks of the brothers, veteran arranger David Van DePitte (famed for his Motown work) added an exquisite cushion of strings while Rance's cousins Judy, Linda and Annie Medez gave a new vocal texture to the group's sound. In late '74 Stax released a single on the new Truth label, the Rance Allen Group performing a David Porter/Ronnie Williams song, "Ain't No Need In Crying", which had the same kind of "inspirational" message which had already proved the perfect transitional material for the Staple Singers during their Stax era. "Crying" had a mellow, lilting flow on which Rance sang with beautiful sensitivity to a heart-stopping falsetto climax.

But Stax Records were tumbling into bankruptcy. Like all the other acts signed to the company, the Rance Allen Group had to find a new recording home. Said Rance, "We then went to Capitol, because Toby Jackson knew the producer there. The album with Capitol [released in 1976] was called 'Say My Friend'." With poor promotion the album scarcely made a dent. They looked around for a new label and California's Fantasy Records became their next home. Explained Rance, "We moved back to Stax because they had been bought out by Fantasy Records, and a guy there by the name of Hank Crosby (who had produced Stevie Wonder and Martha And The Vandellas) wanted to do gospel as much for spiritual reasons as for business."