Rave In The Nave: The controversial contemporary music initiative from Winchester Cathedral

In the wake of a scathing attack in the Daily Mail, the Winchester Cathedral's pioneering Rave In The Nave was put off limits to press persons. Andrew Long went there anyway. 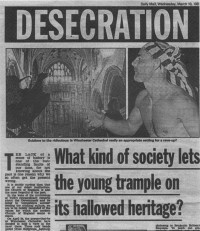 In a church age of Spring Harvest and Greenbelt, Graham Kendrick and Rez, the Big Holy One and Cross Rhythms Sunday Experience, rave praise and Christian thrash metal, and where every conceivable variant of music from industrial noise to Gaelic folk music has become a vehicle to praise God, it's possible to forget that for hundreds of thousands of nominal church goers in Britain it is religiosity not Christianity which governs their world view. This sad truth was recently demonstrated in the Daily Mail. In their March 10 issue, the newspaper gave three quarters of a page in response to the news that Winchester Cathedral were holding a youth event in April entitled The Rave In The Nave. This event, to take place on the 24th April would feature three Christian rock bands, Cross Reference, Azimuth Brainstorm and Fresh Claim, and earlier in the day seminars and workshops. The Daily Mail article, by their regular columnist Paul Johnson, was headed "Desecration" and after asking the rhetorical question "What kind of society lets the young people trample on its hallowed heritage?" proceeded to lash the cathedral authorities for their wilful irresponsibility in letting the barbarians through its hallowed portals. Johnson insisted that the historical figures of Winchester "realised that the true way to the heart of young people is to give them the chance to learn, to enable them to conquer the limitless world of knowledge and realise their own potentialities in the process. By contrast some Anglican churchmen today think the young can be bribed by pandering to the debased taste imposed upon them by television and commercial show business."

Johnson went on to say "It does not seem to have occurred to the Dean that 'having a good time' is not the purpose for which cathedrals exist... Here is a natural amphitheatre for sacred music, from medieval plainsong to Benjamin Britten's Requiem. To belch out grotesquely amplified pop music there is to insult the very stones themselves, let alone the kings and bishops who erected them. The spirits of these benefactors are still there, to register disapproval of the coming saturnalia."

Jonathan Sewell, the Diocesan Youth Officer for Winchester who organised the event tried to play down the astonishing Daily Mail diatribe. "Let's get it in perspective," he said. "It's had one article, since then it's had no negative press whatsoever." Indeed another Tory newspaper, The Telegraph, called the event "a milestone in 900 years of cathedral life" and realised its potential in attracting youth to the church.

However, Johnson's article threw the cathedral officers into a mini-panic. They were approached by journalists from almost every newspaper, radio and TV station in Britain and, fearing further attack, decided to put a press veto on the whole event. So when little old Cross Rhythms approached them to cover the event, I received a polite but firm refusal.

Unperturbed I set out on the afternoon of 24th April to actually buy (!) some tickets and go along masquerading as an ordinary human being. Arriving at the cathedral five minutes before the ticket office closed (phew! my friends and I had a few hours to kill before kick-off.

The cathedral was holding an "Environmental Day" with many well-organised displays drawing quite a large crowd. I was struck by the beauty of the cathedral, despite the structural work that was in progress. As we sat on the common we were entertained by a group of hippies or new age travellers, as they now prefer to be called. They were busking for some pennies, some were juggling, others were singing or playing guitars, ukuleles and penny whistles. At this point a television crew arrived to film a news report about, you've guessed it, the Rave In The Nave and, of course, it was the hippies the enthusiastic camera crew chose to film. The new age travellers gave a rousing rendition of Jethro Tull's "Jack-ln-The-Green". Mags Law of Fresh Claim found it a tad bemusing that this misinterpretation of the rave would make television news.

This, combined with the excitement in the air over the forthcoming folk festival to be held the following weekend, gave Winchester an atmosphere reminiscent of a medieval market town. It seemed to me to be a very cross-cultural society.

Seven o'clock and the doors were opened, the sell out crowd proceeded in an orderly Christian fashion through the two entrances and began to mill about, signing up for the various workshops and checking out the bookstall and cassette sales stands. There was a tangible atmosphere of anticipation amongst the punters, who were mostly teens and twenties, although the wrinkly presence was also to be seen.

Clown priest Roly Bain entertained the crowd by attempting to walk along a "slack" rope and juggling with hoops. The evening's programme was then officially introduced by Canon Keith Walker, resplendent in his crimson robes of office. "I hope that those who tried to stop our fun find it has boomeranged back on them," he said as Roly Bain turned one of his juggling hoops into an impromptu halo for the Canon.

The popular local band Cross Reference shifted the groove into high gear with their own brand of British blues-rock. The group have done quite a few gigs in the area and have obviously picked up a few fans along the way. Their sound was driven by Simon Akehurst's powerful distorted bass and their mix of meaty rock numbers with one or two mellower acoustic songs created a good opening for the evening's proceedings.

I spoke to Akehurst after the event and asked him for his reaction: "I thought it was an astounding success," he said. "A great step forward for the cathedral and the diocese, everybody thoroughly enjoyed themselves and I consider it an act of worship as well." They closed their set with a rousing rock 'n' roll number and left the stage to rapturous applause.

At 8:15 we were on our way to the first of two workshop sessions. There was an incredible list of choices including Amnesty International, ecumenism, working with clay, drama, homelessness, first aid, evangelism, third world issues and the New Age movement. We chose to attend one on using local radio, as we are involved in a radio project at home. We found it to be a very useful chance to exchange ideas and experience.

I spoke to workshop leader Blair Crawford to ask his opinion on what had caused the early bad press. "I think that what really caused the controversy was just the use of the word 'rave'," Blair said, "and that being associated with one of the oldest cathedrals in Britain. I think that what's happened today is that all the fears people had have been proved to be ill-founded so I hope that people will have the confidence to move forward."

At this point I was approached by a rather official looking gentleman who asked me where I was from - the camera and tape recorder must have been a dead giveaway. I owned up to being a hack and he very nicely told me not to take any more pictures or interviews or I would be thrown out (oops!).

Thank God things have moved on!

I was lead singer of Cross Reference back in 1993 and we had a wonderful time at 'Rave in the Nave'. I was just showing someone a few photos from that time recently and generally looking back with a glad heart. The Rock N Roll number we performed at the end of our set that night is a song called "He's Alive!" - a no nonsense celebration of the Good News of the resurrection of Jesus. I will be playing that song next week in Billericay when I preach at the Easter assembly for St. John's School.

Yes, you may have guessed that I am now a Vicar. Strangely, the Lead Singer of one of the other bands that night (Fresh Claim) - Simon Law - is the new Vicar of Pitsea, just a few miles down the road. He doesn't look any different now than he did back then!