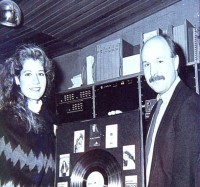 One of the glibbest of all the phrases trotted out by those seeking to broaden the church's cultural boundaries is 'the Christian subculture'. And no aspect of Christian activity comes in for more patronising disapproval than the work of Christian record labels. To their critics such companies are small-fish entrepreneurs cashing in on the woeful cultural insularity of Christians by giving them entertainment (a down market name for art) by-Christians-for-Christians.

The Christian record companies see themselves rather differently. Christendom's two 'large' companies and the dozen or so tiny independents almost without exception use the world 'ministry' in private discussions and public announcements (at least when addressing other Christians). They see their role primarily as communicating some aspect of the gospel though will admit to you that this is not a pure calling of evangelism or 'building up the saints'. Rather, Christian record companies as well as having a ministry mentality are, like EMI, Phonogram and a thousand 'secular' independents, ruled by market forces. Record companies sell art and if the art they sell doesn't have enough purchasers they go bust.

The complex philosophy of Christian record companies - one part untainted ministers of spiritual truth, one part helpmates and enablers to that rarefied breed 'the artist' and one part hard-nose businessmen battling to close down a sale in a recession-racked economy, ensures that they're seldom understood and often actively disliked.

As if this situation wasn't bad enough Christian record companies are also faced with a seemingly insoluble problem. The market place in which they operate - Britain's evangelical and charismatic church - is apathetic towards the arts, having had little or no theological teaching on the subject (with the brave exception of the late Francis Schaeffer) since twentieth century mass-media turned the popular arts into the primary means of receiving information and aesthetic satisfaction.

Such is the lack of involvement by believers in the arts that a thousand Christians will statistically go to less pop concerts and art galleries and buy far less books and CDs than a thousand non-Christians. Only in TV-watching are Christians as active (shouldn't that be passive?) as non-believers. This indifference to the arts by most Christians means that Christian record companies are seeking a minority of a minority audience - the evangelical or charismatic sufficiently keen on music to buy an occasional CD.

And when one considers the massive secular pop music sales hype directed towards young people (the section of the market nearly all record companies must attract if they are to survive), which ensures that for every young Christian who buys an Amy Grant album, ten buy one by Madonna, one is left with a bleak marketing picture for Christian record companies.

In the past there have really been only three ways Christian record companies can go: find other areas of ministry to subsidise a Christian music division; stay very, very small with minimal overheads; or go bust.

The average album sales of Christian record companies make sobering reading. The majority of Christian albums released in the UK sell 2,000 or less each. A minor 'success' would be 5,000 - 7,000 sales. With a 'hit', a British company might expect 8,000 to 12,000 sales (there are very few of these each year), while a 'monster hit' (eg Keith Green's 'Songs For The Shepherd') would have to stay in the Christian bookshop best sellers for 3 or 4 years to clock up 25,000 sales. These average Christian music sales figures have hardly risen over nearly two decades. Over the same period costs, particularly studio costs, have quadrupled and quadrupled again since the halcyon days when early gospel music entrepreneurs could take a group of guitar-strummers into a studio over a weekend and come out with a master tape. Today's multi-track studio costs run to thousands of pounds.

British Christian record companies really began in 1954 when Bill Hamilton, a Glasgow book publisher, started a company called Redemption Records. It was linked to the Billy Graham Crusade, in Britain that year. Before long Hamilton formed a business relationship with Jarrell McCracken, a legendary US pioneer of Christian music recording whose company Word Records was to grow from a one-man backroom concern to the largest gospel record company in the world.

Word USA were already interested in the UK market, they'd even co-produced an album by Frank Boggs. Hamilton later moved to London and joined forces with electronics wizard Eric Livingston Hoff. Livingston Records and the Herald record label began putting out primitive recordings of strictly traditional religious music. When Livingston was liquidated in 1967 Jarrell McCracken stepped in and what is now Word UK was launched. It consisted of Hamilton, and two part-timers.

The late 60s were the formative days of contemporary Christian music in Britain. The Merseybeat boom and particularly the rise in popularity of acoustic folk, convinced a whole generation that maybe this beat music wasn't of the Devil. All over Britain, fishnet-festooned coffee bars sprang up in church basements and halls, where the 'gospel was gossiped' and where teenage musicians with names like the Crossbeats and the Glorylanders sang simple evangelistic songs. A loose-knit organisation to put on concerts and act as pressure group for the coffee bar musos was formed in 1965 called Music Gospel Outreach. They printed a fact sheet-cum-magazine, Buzz and as it grew in circulation and printing-budget, MGO/Buzz launched its own record label Key Records to record the new wave of coffee bar Christian bands.

By the early 70's the MGO/Buzz/Key set up had splintered into different groupings, Peter Meadows taking the magazine went one way (to go through different metamorphosese as 21st Century Christian and Alpha) while Geoff Shearn took the Key catalogue and roster (including a distinctly folkey Graham Kendrick) to form Kingsway Music. It was Kingsway's move into songbook publishing with the immensely popular Songs Of Fellowship' series in the early 70s which saved the company from floundering (the full story of Songs Of Fellowship will be told in next month's instalment of 'The Biz' on Music Publishing).

Things were changing for the record companies. As early as June '71 Buzz were writing about 'The Jesus Revolution' sweeping America where thousands of one-time hippy rock 'n' rollers and ex-flower-children were turning to Christ and where, a harder, rockier form of Christian music than the folkey pop of the UK Christian coffee bars was finding its way onto record. Albums by musicians out of The Revolution like Larry Norman and the Sheep began to find British release, The Sheep being the first release on Word (UK)'s new contemporary label Myrrh with the band top-of-the-bill at the first Greenbelt Festival in 1973.

Could you give me an up to date figure in Chrisian Music sales in the UK. By Christian Artists, eg. Hillsong - Gaither's Homecoming - Graham Kendrick -Matt Redman ECT. ....
If it changed much in the last 40 years I'll be very surprised. I'm beginning to believe that I'm the only Christian who buys it. In my 40 years I don't know of anyone else like myself, no one comes even close, including some christian radio stations. Thanks.

Great read Tony....so many memories but I still have not discovered any definitive list of releases on the KEY label...just when I think I've got them all I find Key 42 and Key 44.....

just another way the lord want us to come to him.