With a riveting brand of techno-pop and lyrics that dig deep, South East band RED SUN have a heart for the developing world. Steve Bassett (ex-Heartbeat) told Susan Lumsden the story so far. 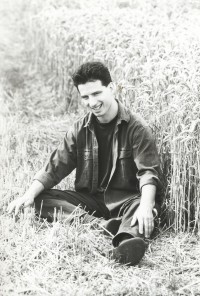 "A band is like a recipe," Steve Bassett mused. "Each one is different. You put together a group of personalities and see what comes out."

Steve, who has played bass with New Beginnings, Cho, Heartbeat and on a number of other recordings, is no stranger to musical cuisine. But he admits that the latest band on the list, Red Sun, brings together a unique cocktail of talent and experience in just three members.

Heading up Red Sun is accomplished musician, vocalist and songwriter Colin Pye (One A.M., Zipcodes) who finds time these days to pastor a Baptist church in West London. Steve (bass) and his wife Sue Reeves-Bassett (backing vocals) bring to the band the experience of national ministry with Heartbeat and Steve's job as Media Director of Oasis Trust spearheads the world awareness that all three share.

The trio first discussed forming a band nearly two years ago. "We then did a gig together at The Dog And Duck in Wembley," said Steve. This went well and things moved cautiously forward. Now the trio are committed to making Red Sun a success. Their most basic concern is an international one challenging the church to action on poverty and injustice. The first-hand experience of the Third World Steve has in the course of his job provides up-to-date raw material. The picture he brings back is often bleak; when I spoke to him he was just back from Thailand where a group had been looking at issues like child prostitution.

"It takes a while to work through the system," Steve said. "It's a lot tougher out there than people imagine and it's easy to get depressed. But at the same time you can see people who are caring for others in Christian compassion; it's good to see that's alive and well."

The band's songs tackle difficult issues like contemporary slavery, refusing to accept easy answers. "None of us would now," said Steve. They recognise that it is all too easy to "sing about important things but sound a bit bland. We want our music to have a passion about it.

"We're saying that Christians should not be selfish with what God can do. So often (third world) development gets pushed right to the edge of the church's activities. We want to urge people to get hold of this, not be passive about it."

This passion is balanced by what can only be called maturity. They may not be exactly long-in-the-tooth, but Steve readily admits they are "not a band of 18 year olds." Their varied experiences have taught them a lot. "Idealism is good, in fact I think you need a bit of idealism to be an artist, but as the years go by, realism comes in as well. Sometimes things don't change as fast as you would want and you have to keep battling on at the same things, again and again."

Challenging the church can be a slow business and Colin's experience as a local pastor brings some vital insight into this frustrating fact. "Sometimes in national ministry, you can be going round at 100 miles an hour wondering why the church isn't changing," Steve said. "Colin can help us see why this happens."

Red Sun's thoughtful and lyrically detailed songs seem ideally suited for the headset and less suited to the one-off live experience. But an ongoing promotional tour for Christmas Cracker (an Oasis youth project) has helped them find the live medium which suits them best. "Streets Apart", for example, a good song at the best of times, "blew away" the audience when shown with accompanying video footage. The band hope to stay with multi-media as much as possible. "Of course, we do do gigs," added Steve. "We went down well at The Dog And Duck!"

Multimedia may of course lead them further down the road to being a one-string Third World fiddle, but they insist that is not the case. "And we're not another Garth Hewitt," Steve said. "Not everything we write is about these issues. What we do feel is that there are not many people writing songs around these issues in a real way."

The varied musical experiences of its members is clear on Red Sun's debut album 'Rising'. In fact, one might almost conclude they had not yet found their own style: "I Will Speak Out" even puts a new arrangement to an old Heartbeat song. But Steve says they have been "finding themselves" in recent songwriting. The move is towards "strong rocky melodies but with modern rhythmic things... a sort I of Genesis/Peter Gabriel with a bit of rave!"

Quick decisions on likes and dislikes is I one advantage to being a three-person team, as opposed to a much larger band like Heartbeat. "And you can fit all the I gear in a suitcase and rehearse in a front I room," smiled Steve. But a strong frontman like Colin makes teamwork all I the more necessary. "The challenge is to I come across as a band, not a solo artist supported by two others."

As caution characterised Red Sun's early development, so it does the future. An album is being cautiously discussed, which could be either CCM or crossover. It is worth noting that "Kiss My Soul", the opening track on 'Rising', was selected by music business glossy Future Music for its cover CD in a recent issue. Steve, Sue and Colin would all like to return to full time music, although family commitments as well as personal preferences make "bombing round the country doing gigs" unlikely.

"We're still developing," continued Steve. "But we're confident in what we're doing. We hope to ruffle a few feathers. In the days of the so-called Toronto Blessing, it's important to challenge people to use God's blessing." Although they would change the term if they could, Red Sun accept that this is their "anointing", and show no signs of letting the sun go down on them.

I would like to know more about Sue because may-be she is the girl I designed the wedding dress for in Marylebone high street in London in the late seventies?
Please do let me know.
Thank you,
Minouche