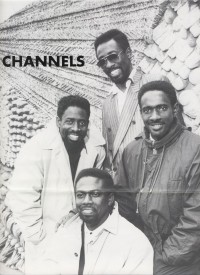 The Channels are four brothers from Jamaica. Basically, they are a vocal group who gather other musicians around them to play reggae. They came to England in 1987 under the wing of a Birmingham Pentecostal church and spent six months touring the West Midlands gospel scene. Adopting the name Channel Of Praise they recorded an album, produced by Paul Poulton, for Big Feet Media. Later, the brothers shifted to London, recorded a privately made album as the Channels and did a storming set at Greenbelt. Currently they do a lot of acapella work. I spoke to Michael.

"We still do the reggae when we can put a band together who can play our style -'cos there's reggae and there's reggae! We prefer it very simple, very straightforward, which isn't the easiest kind of reggae to play. Anyone can play reggae, but to play it well is another issue. It's not only a music, it's a feeling. It can't be clinical or mechanical - it must have that special aroma flowing out of it."

The Channels are as determined as every other artist I spoke to, to get their message across to as wide an audience as possible. The heat of this passion actually

PASTOR DOESN'T LIKE IT
Reggae gospel artists have to put up with a great deal of opposition from churches.

So you think you've got problems convincing the vicar to let you play a rock track in the church? It is quite possible that no other form of music has had (is having!) such a struggle for acceptance within the church that reggae has had. Here are a few of the artists' stories.

Noel Dyer: "Christians have difficulties coming to terms with the heavy bass line and the profound drumming and they say, That's exactly what we're hearing outside and we don't wanna hear that in the church.' They identify reggae with drugs and the Rastas. I believe it's been a great mistake. We've been to places where people say, 'We don't want you to play that', and we say, 'OK, we'll leave', because we're not going to compromise."

Ann Swinton "After a gig in Birmingham, a very intense young woman asked to speak to me. She said she'd brought some non-Christians along and they couldn't be expected to realise the difference Christianity can make because what I'd presented sounded the same as what they heard in the clubs. She accused me of 'confusing sinners' and asked me to prayerfully consider what I was doing! I said I'd pray for her."

Noel Dyer: "Some of my friends told me I had to stop playing reggae. The greatest objection came from within the black churches. The black Pentecostal churches insist on dictating a type of music to you and if you don't fall within that particular category, you're an outcast. They'll know you're there and they won't book you."

Michael Wright: The black opposition is the only opposition I know. It is so entrenched, so rigid. Some would rather die than chance the effect of change. When we've performed to mixed audiences the response is encouraging. It's within our own church tradition - that's where the opposition came from. I think it's there still."

Ben Okafor: "When I began to play reggae music, the first think I was told was that it was not a Christian form of communication. It is Rastafarian and therefore can't be used. Christians can be very backwards. They don't know what's available to them, they don't know what God's creativity within human beings can get up to. Half the reason why Christians struggle with these things is probably related to the fact that they didn't initiate them. The fact that someone is not a Christian does not mean that they can't tell the truth or that what they create is wrong."

Rupie Edwards: "When I got baptised, I nearly lost my business because people were advising me not to sell this kind of music. But when King David was dancing, do you think it was to a waltz? You can't control music, 'cos the birds will sing out and even the stones rolled by the sea will make a sweet musical sound."

David Smith: "A lot of people look at me as if I'm deceiving the Church! But God has inspired me to share my in-built feeling with his people, so there should be no problem. I believe the younger generation are turning it around."

Noel Dyer: "I've seen many good and upcoming gospel musicians become demoralised by the ministers who think gospel should only be played one way. Gradually, there is a change. The traditions are being smashed to bits and a greater acceptance is coming." provokes some dissention within the ranks of righteous reggae.

"I don't agree with Ben that reggae music is of the ghetto. The music was never for the ghetto, it was for people. Because it was born somewhere doesn't mean it has to belong there. Jesus was born in Bethlehem, but his message has gone out way beyond his birthplace. We even heard about him in the West Indies! So I think reggae music is for everyone. It's come a long way and it will never die."

what was satan's duty in heaven? Chief musician! he has not stopped working and we have been so caught up in his trap that we no longer know the difference between the sacred and the profane. let me ask, ' what kind of music will be played in heaven?"