Regie Hamm: The singer, songwriter and producer with a Job-like testimony

Mike Rimmer met up with the Nashville-based songsmith REGIE HAMM 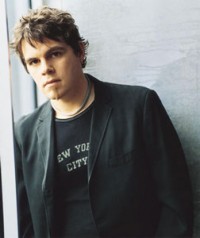 It is possible to look at the life of Regie Hamm and see it as some kind of grand story of almost Job-like proportions. When I first came across his name, he was a songwriter and producer working on the early albums of Clay Crosse and there was something about his name which made me imagine he was some kind of gospel veteran but in reading his autobiography Angels And Idols and finally meeting him for a chat, I could not have been more wrong. He says, "Maybe I'm an old soul. All my life, people have said I didn't realise you were this young, and I didn't realise you were this white! Fred Hammond told me that one and he thought I was a brother. I said I am a brother, but from the music and my name it sounds like I am an old blues man."

His story is like a modern day telling of the Book of Job. Ambitious and driven, Hamm made a name for himself in the Christian music industry where those early recordings with Clay Crosse put him on the map and won him recognition and awards. Ultimately it wasn't enough and he left the Christian music world because he craved respect and success in the mainstream recording business and recorded an album that looked to be every inch a world beater. But within weeks of its release, his whole life collapsed. Professional success seemed to disappear overnight and with the undiagnosed illness of his adopted baby daughter, everything unravelled until he lost his career, all of his money and his home. Don't worry, there's an extraordinary happy ending.

I have a friend who says it will all work out in the end, and if it hasn't worked out then it's not the end. Hamm relates very strongly to the sentiment. "That's one of my favourite quotes," he says, "and it's exactly right. I had a lot of lessons to learn that I didn't realise I needed to learn. But as I got into the process of raising this child, rather than being a music person, I realised the world was a lot bigger than hit records."

We're meeting in Nashville and Hamm does come across as a man whose soul has been tempered by his life's journeys. I get the idea that I might not have liked the younger Hamm so much but this guy has seen the destructive forces of the world rip his life apart and the redemption of God piece him back together again.

And so he told me some of the story. 'Set It On Fire' is his second album. "I made my first album in 2002, signed to Universal Records in 2003. It was called 'American Dreams'. It was climbing the charts and doing quite well. When I went to China to adopt my little girl, I was away three weeks. In three weeks I came back and my single had died and my record deal was done. But it was the start of a series of events that sent me through a five year odyssey; becoming financially ruined and raising a special needs daughter with a very rare genetic disorder. Losing my career and my beautiful home on Five Acres and all my money, all the things that I thought would sustain me. Then being stripped down to my wife and my children, love and God. It was when I got to that place that beautiful things started happening in my life."

So was the financial ruin caused by his medical bills? "It was a combination really," he explains. "Medical bills were certainly a big part of it. But also the fact that the music industry changed so dramatically and dreams for songwriters changed so dramatically, and I was part of that. Also the fact that I had lost a single and a record deal, I had left Christian music to go into pop music and nobody really knew what to do with me. When they can't make that determination quickly, the industry moves on quick. They like things that are easily quantifiable, it's easy to sell. It was just a convergence of events financially that led to cleaning out savings and investments, getting to the point that you are at Ground Zero basically. It isn't the end of the story, that's the good news and I think if I am trying to say anything in the book and CD to people it's that the story isn't over until it's over."

Back at the beginning of this story, the young Regie started playing music when he was five and was playing for money by the time he was 10 years old. He remembers, "My family was musical, and we travelled the country singing and playing. I've been getting songs recorded since I was 15 or 16, so it's a lifelong process. I was raised a Christian and my Dad and Grandfather were ministers. There are 21 licensed ministers in my family, so that's a lot of therapy!"

It would be easy to believe that Christian music was an obvious place for Hamm to end up. "Yes," Hamm agrees. "Believe it or not it wasn't necessarily my intention, but I had so many friends and it was really the world in which I lived and breathed, so it sort of naturally sprung up. My first instrument was actually drums, and then in my late teens/early 20s I gravitated to the piano and that became my instrument. I moved from writing into producing and that was also an accident. I was always an artist to me, but people would be interested in my songs and want to record them, and they liked how they were produced so they asked me to produce for them, so that is how that all came about."

By the turn of the century, Hamm was established as a producer/songwriter but a decade later the sheer number of artists caused him memory problems. "I worked with Bob Carlisle, MercyMe, The Martins... I can't even remember all the people... Daily Planet, Mark Schultz... It was good times, we had a good run there."

So he was doing pretty well, getting songwriting and producing royalties, making an impact in his corner of the Christian music world. What possessed him to decide to go and be a pop star? He recalls, "I got to a point in my life where I realised I wasn't fulfilled. It was really getting to be a treadmill - the downside of being successful is that you end up doing the same thing over and over again. I came to a place where I asked 'what is it I really am?' I am an artist, I know I am. So I cancelled all my records I was doing, went into the studio and recorded my own song, with my own money and got it signed to a pop record label. I thought that was my destiny, where I break out and become a legitimate music person. That's what happened really, it's all a growing, learning experience."

At one point, it must have looked like it was all going to happen for Hamm. He had an undoubted talent in songwriting and production, his own immaculately state of the art recording studio on land behind his house and a giant multi-national record company backing him. "There was a shining moment," he admits, "I could see the brass ring and I was racing towards it. I write about this extensively in the book, but God had other, better plans, and you always have to trust that is the case. I think my plan would have been nice maybe, but maybe not. It looked really good for a minute; I had about three months of euphoria!"

In the middle of pursuing his dream of musical success, Hamm slowly came face to face with some realities in his family life. "My wife and I found out in the '90s that we weren't able to have children, we both possessed physical problems which weren't going to allow us to do it. So we extensively explored the different types, domestic adoptions, state adoptions and we decided to go international. China had a very sleek system, it was the most attractive of all that we saw and we just had a heart for the Chinese kids, you just develop an emotional thing. So we put in to adopt a Chinese girl and it was an 18 month wait. We finally got the call, and went off to collect her three days after my debut record was released."

This was not great timing for the music career so might have contributed to Universal losing confidence in their artist. He remembers, "It was horrible timing for my career. My agents were actually supposedly working on me opening for the Goo Goo Dolls in Europe. My agent was visibly worried and said when you get back, get a nanny, you've got a lot of work to do. I knew I needed to be out there promoting, but there was something more important going on. Opening for the Goo Goo Dolls would have been really nice, but spending the time I did with my daughter was much more important. So that was another lesson I needed to learn."

Obviously Hamm didn't know about his daughter's health issues when he travelled to China to adopt her. In the book he describes in great detail how very early on they worried that there was something wrong but thought it would all be easily resolved once they got their adopted daughter home. The reality didn't become fully apparent for a few months. He explains, "What she has doesn't manifest itself until 10 months and she was eight months when we got her. She had some symptoms but some of them could have been attributed to being confined to a crib for months or things like that. It took us years to get a diagnosis but it took us several months to realise that she had an actual disability. It was so rare; none of the specialists we went to knew what it was. It was actually a random encounter with an old friend who knew someone who had a kid with the same thing, and they said, 'Have you ever heard of Angelman Syndrome?' We said no and they told us she acted just like the child with this condition. So we did genetics tests which took six months, but it was a five year struggle to find out."

Great article. I have read "Angels & Idols" and it was a terrific read. Allow me to encourage you to order a copy.

Thanks Mike!
Regie is a dear friend and we co-write together. He is the real deal- thanks for a well-written article. Also, thank you for your review of one of my projects years ago: "The Bondslave, The Bride and The Battle."
Godrest and Godspeed,
David Baroni