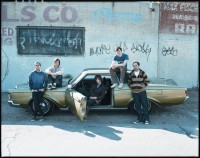 America's influential CCM magazine summed it up very well when they wrote, "With great success comes great expectations and on March 6th all eyes will be on Relient K as it releases the fifth full length album in its seven year history." The rise and rise of the band from Ohio, originally perceived as a Christian answer to GreenDay with their pop punk anthems and their quirky pun-laded songs has been one of the amazing phenomena of Nashville's CCM industry. But with the release of 'Five Score And Seven Years Ago' the anti has been well and truly upped for the band. It's the first album where mainstream giant Capitol Records (the Beatles and all that) will handle the primary release of the album and though Gotee will still continue to handle Christian retail distribution it's well and truly an album pitched to the bigger non-Christian audience. Expectations are high. Lead guitarist Matt Hoopes explained to CCM why it's taken two years since the release of their last full length album. "We got signed to Capitol right as 'Mmhmm' was coming out so it took awhile for them to do videos and to push us to radio." In addition to Relient K's standard headlining club and theatre tours, the band joined the Warped Tour and hit the road with mainstream bands such as Good Charlotte and Simple Plan.

The lead mainstream single from 'Five Score And Seven Years Ago' is "Must Have Done Something Right", a more of a straight-ahead pop tune than anything the band have previously released, leaving even Relient K's vocalist, guitarist, pianist and composer Matt Thiessen slightly concerned lest the tune is "too much of a departure" for their legion of regular fans. But he also pointed out there's plenty for Relient K followers, including songs like the rocker "I Need You" and the Christian radio single "Forgiven". "Sometimes we have problems forgiving each other," Thiessen told Christian Retailing magazine. "Everyone in the entire world is guilty of something. The whole ides is 'judge not lest you be judged.'

With 'Five Score And Seven Years Ago' the band have delivered an album which shrugs off the last vestiges of pop punk derivativeness to deliver an album of dazzling maturity which has already been described to me by one industry insider as "Relient K's 'Jesus Freak' or even 'Pet Sounds'." Probably the most arresting song on the whole project is the sombre 11-minute-long "Deathbed" which includes Switchfoot's Jon Foreman guesting on a song which is described as a "tale of a man's life and death which brims with witty observations and aural ironies."

On the album, though puns are in short supply, Thiessen has lost none of his zany wit. The opener, the acappella vignette "Plead The Fifth" is written from the viewpoint of a man with an outlandish conspiracy theory about Lincoln's death and features Matt doing vocal impersonations of each part of a drum kit while "Crayons Can Melt On Us For All I Care" is classic Relient K silliness. "I really love to not be serious all the time, even when I am being serious," said Thiessen, who likens the band's growth on 'Five Score And Seven Years Ago' to Laffy Taffy. "It's the same flavour but we try to stretch it a little bit. It's still melodic, it's still rock 'n' roll, there are still a lot of dynamics. But at the same time, we're trying to write a bit differently, lyrically."

In addition to the two story-songs that bookend the album, there are some love songs - and they're happy ones. "I always write about what I'm going through and I can't avoid the fact that I'm just really happy and there are some good things going on," said Thiessen. The elation is palpable on "The Best Thing", which veers giddily between majestic piano flourishes and punked-out bliss delivered at breakneck speed.

'Five Score And Seven Years Ago' marks Relient K's first full length album by bass player John Warne and guitarist Jon Schneck - though the two did appear on the band's 'Apathetic' EP released in late 2005. During the recording of the 'Mmhmm' album long-time bassist Brian Pittman decided to leave Relient K and join post hardcore/metal band Exhale. "We still hang out," Thiessen assured CCM. "We're still good buddies - it was just that he wanted to do something else." 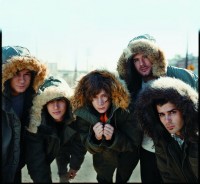 Pittman's replacement John Warne had previously been the frontman for indie rock favourites Ace Troubleshooter. But the changes didn't stop there. The band decided to add a second guitarist and keyboard player brought in Jonathan Schneck, former touring guitarist for Audio Adrenaline. Now as a five-piece band for the first time, everything from songwriting to live shows has changed. Thiessen told CCM, "I wanted to be free to play move piano during the show. It also changes the way you write when you know you can have two guitar parts going and play piano and sing."

For three tracks on the album the producer was mainstream big timer Howard Benson (My Chemical Romance, Motorhead). Said Thiessen, "Everybody that has heard the record so far has said that, sonically, it's a step in the right direction. The guitars sound better; the drums sound better; the vocals sound better. The fact that we spent a lot less time making it, and it sounds better, is cool. And I think that Howard brought all that to the table."

Relient K's lead guitarist Matt Hoopes was thrilled to work with the legendary Benson. He said, "He's always thinking about the mathematics of the song, the melodies and the arrangements and just how everything fits together." They were all fans of Benson's regular engineer Mike Plotnikoff as well. Continued Hoopes, "He's worked on a lot of big records, from Metallica to Bon Jovi's 'Slippery When Wet'." Benson's team of engineers and techs, along with his staggering collection of vintage amps and guitars blew Hoopes' mind. "They had a full-on guitar tech there the whole time who was there twisting all the amp knobs and setting up all the guitars right before you played them. Every time we've done a record on our own, the entire time, we're sitting there tuning, tuning, tuning. It drives you crazy, and it takes forever." But with Benson's team it was different. "There was no way the record could have gotten done that fast without that team there." Added John Warne, "It was really cool to be around people who were so proficient at their jobs. It made you want to be a better musician and made you interested in all the different aspects of the recording process."

The song on the new album which has everybody talking is the epic-length "Deathbed". With its stunning use of piano, strings and even banjo it's a long, long way from the happy-go-lucky pogo anthems of the band's early days with Gotee. Switchfoot's Jon Foreman's arresting falsetto also add pathos to the tale of a Saviour God ushering the weary and broken protagonist into eternal joy. Foreman told CCM he was honoured to sing on the song. "I enjoy singing notes I wouldn't write that approach subjects that I don't write about - it's like a vacation, or a trip overseas. If I were to hire a voice to play the part of God, I would shoot for a voice like Johnny Cash or maybe Lou Reed. So I tried to dive into it and make even the high notes feel authentic and strong."

How did such a bold and obviously "Christian" song as "Deathbed" go over with a record label like Capitol looking for big sales in the mainstream? Said Thiessen, "I've always said that putting Jesus' name in a song is a really difficult thing to do because it's really easy for it to come across as cheesy." Some fans on the band's message boards have misunderstood this statement, mistaking it for shame or fear of being bold spiritually. Not so, said Thiessen. The band make no apologies for the Christian influence on their songs. "I still think that it's really hard to say 'Jesus' in a song and have people respect you for it, especially in pop rock music. 'Jesus' is a name to be revered and, if you treat it lightly, it's borderline blasphemy! I've put 'Jesus' in the wrong spots sometimes."

Repercussions from the mainstream scene are not expected, and if they come, well. "If you know us all personally you'd hear us say that we don't really care if this record sells. We don't care if we're on MTV. We don't care if we have platinum success or anything like that, and you'd know that it's not us trying to be humble - it's just legitimately what we think. We don't really care! If this record tanks because I put 'Jesus' in a song, so be it. That's a sad thing for society." Capitol Records' senior director of marketing Tom Osborn believes the band's strong reputation as good guys and hard workers, combined with the internal sense they have of their audience will protect them from the industry movers and shakers who still shun believers; or as Osborn told CCM, "People who over-think it and are, in general, usually too 'hip' for the room." Osborn added that Capitol is overjoyed to have the chance to launch Relient K into the mainstream. "They are a great band as a whole. They've done an incredible job [on this record]. This is why you do this deal. We are kicking ourselves with happiness."

Hi, my name is Seth and im 10 years old I really enjoy your music. My dad has been listining to your music for years , and he still does!!! Hes a high school teacher/ Punk Rocker. We have all your cds and know all your songs my favorites are cadie Hawkins Dance, Must of doen sothing right, and Mabilief. Well hope you have a great summer by!

I love you Relient k