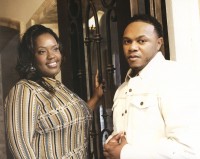 The track "Good God" by California's Renee Spearman & Prez was recently selected for airplay on Cross Rhythms radio and a more soulful anthem proclaiming God's ability to take us through the toughest of times would be hard to imagine. So who are these two powerful vocalists from Los Angeles? I recently quizzed Renee and Prez to find out about their music and ministry. "Good God" comes from the album 'He Changed Me' released earlier this year by JDI. Male vocalist Prez spoke about the song. "'Good God' was written by Renee. It's a quartet song. My dad is a gospel radio DJ and he specializes in quartet music. When he first heard the song, he could not wait to play it. As a matter of fact, he played it before the CD had a confirmed release date. As I sang on the track, my inspiration came when I realized how awesome God has been in my life. Sometimes we take the little things God does for us for granted - waking us up, giving us the ability to feed ourselves, activities of our limbs, etc. The song is very relevant to listeners today because sometimes we all need to be reminded that we serve a good God. Many times we can get so busy with work and taking care of our families that we fail to really acknowledge God. However, 'Good God' makes the listener pause and look back over their lives to see the awesome hand of God."

Renee Spearman added her thoughts about the song and the whole 'He Changed Me' album. "On the CD we didn't want to have a particular age group of listeners, we wanted to have a CD that the whole family could enjoy at all age levels. So we focused on all styles of songs, urban, contemporary, praise and worship, traditional, quartet - that's where 'Good God' came in. While writing the song, I had to get in a quartet-mental setting. As I was writing, I was thinking what would the Williams Brothers say, what would the Canton Spirituals say, what would Lee Williams say? That is how the song came about. Then we asked one of our quartet friends, Isaac Reese, to do the song with us. Isaac sang the lead and also he helped out on the background to give it that 'real' quartet sound. We wanted to be able to have a good quartet song that can actually be sung in a Sunday morning church service setting."

Renee was born in Lynwood, California. Her entrance into the world was rather dramatic. She explained, "I was not expected to live. The doctor told my mom that it could either be me or her, or both of us. I am so grateful to God for sparing both of our lives. I grew up in church. My dad being a pastor made sure that I was heavily involved in church, singing in the children's choir and as years progressed, the adult choir. Although I never played instruments, God gave me a gift to be able to hear and teach parts, so at a young age I would teach songs to the youth choir, and that eventually turned into writing my own songs. We (as a family) did not listen to any other music in our household other than gospel music, so I was able to really focus on different genres and styles of gospel music, which helped me greatly to develop my skills as a songwriter."

Renee explained how she came to form the group Prosperity. "My original goal was to write songs for national recording artists, so I put a demo together, showcasing the songs that God had given me to write. Once the demo was complete, I had a conversation with my cousin, Roman Johnson, a music director, who currently works for Stevie Wonder. Roman encouraged me to not only submit my songs to gospel artists but to also record my own project and be my own artist. So, I had a meeting with the singers that sang background on the demo and they also encouraged me to record my own project, and that is how Prosperity was formed. As I was continuing to scope out singers for Prosperity, I attended a John P Kee concert, and there was Prez, singing background for Erica Atkins (Mary Mary). After the concert, I approached Prez about singing for my recording and he said 'Yes.' This is where it all began."

Prez filled me in on his background. "Both of my parents played a role in my musical development. My mother (who passed away of breast cancer in 2007) was a choir directress, member of a singing group called Spirit Of Joy and eventually became an assistant pastor of her own church. As a child, I remember my mom taking me with her to choir rehearsals and different singing engagements. It was then my interest in singing and music was sparked. As a radio gospel disc jockey my father would emcee large concerts when major artists came to the city. As a result, I was able to open up for major gospel artists like Shirley Caesar and The Williams Brothers, when I was in elementary school. My gift of music began to blossom in junior high school. By this time, I was very active in my church's choir. I can remember leading songs for the adult choir. Because I loved music so much, I decided to attend a performing arts high school (Los Angeles County High School For The Arts). It was here that I was trained in various music genres - from classical to jazz to pop to R&B and of course gospel!

"After high school, I joined Mary Mary's uncle's church - Evangelistic Church Of God In Christ. During this time, before the duo Mary Mary had formed, Erica Atkins was doing more solo stuff. One year she was given the opportunity to open for John P Kee and New Life. I sang background vocals for her. During her set, she allowed all of her background singers a chance to sing by themselves. Renee was in the audience and liked what she heard. She approached me to sing on her 1994 debut project with Prosperity."

That first album on Grace/Tyscot Records was titled 'Changed The World'. Further albums followed, 'Renee Spearman Presents Prosperity' and 'From A Songwriter's Perspective' (the latter featuring nationally known recording artists Dr Bobby Jones and Byron Cage). Renee took up the story: "Following 'From A Songwriter's Perspective' Prez was approach by my manager (at the time) to record a solo project. Things didn't work out, so Prez and I decided to start our own label, BlackSphere Entertainment, and record a project together [under the name] Renee Spearman & Prez Featuring Prosperity, 'Celebrate'. 'Celebrate' mainly featured Prez because originally this was intended to be his solo project. After 'Celebrate' I made the decision not to continue Prosperity."

'Celebrate' was released in 2002. It took a goodly while for the next release. Explained Renee, "It was so funny because we wanted to take our time, but at the same time make progress, so we decided to record one song a month, which lasted for almost five years, but we did it. As we were approaching the end, Prez came up with two wonderful ideas. One was to involve Dr Bobby Jones as a presenter of the CD. The second idea was to involve Professor James Roberson/JDI Records as a record label/distributor. Dr Jones and Professor Roberson both agreed to help us out. We are extremely grateful to them."

One of the things that gives 'He Changed Me' its contemporary edge is the state-of-the-art production from Kenny Smith. Said Renee, "When we were working on 'Celebrate' a friend of mine referred us to Kenny. Kenny was originally supposed to produce one song with us, but he eventually ended up producing the entire CD. Kenny is so cool, he is very easy going, very helpful, very positive and 'the man' when it comes to his beats."

Things are very busy for Renee and Prez. The record company have selected the track "You Could Have Chose Someone Else" as the album's second single while "Happy Mother's Day" - a tribute to Prez's mother - will be released in May for Mother's Day. Prez also recently participated in a live recording with his church choir, City Of Refuge Sanctuary Choir. The recording was presented by Bishop Noel Jones, the renowned pastor who is the brother to actress/singer Grace Jones. As the City Of Refuge Sanctuary Choir's last album debuted at number one on Billboard's Top Gospel Album Chart, big things are expected for the newie.

Renee is philosophic about what the future may hold for Renee Spearman & Prez. "The Bible says, "In all the ways acknowledge him, and he shall direct thy path.' I totally accept God's will for my life, so whatever he wants me to do, I will do, because I know that God could have chosen anyone else to do this work, but he chose Renee Spearman & Prez."

Hi there,
I have been blessed by your show,in the past.
I would like to send you a copy of my forthcoming single,as I think it will be a blessing to your show.
It's an uplifting praise track, while I work on my album.
My bio will be on the CD cover,and you can find me on Facebook. Please let me know where is best to send the parcel. I will be looking to send it out next week. Many thanks & God bless, Estella

I have watched PreZ mature in the Lord, as well as musically throughout his life. I thank God for a young man who desires to live a saved life, and continues to acknowledge God's presence in his life. Renee your gift of song writing is so anointed. You Could Have Chose Someone Else really ministers to me and encourages me as well. God choicest blessing to the both of you as you continue to seek the will of the Lord

I've always been so PROUD to call you nephew. Not only was your mother a Godly inspiration to my life but you as well. I've watched you grow from a boy to a man and I know your mother would be so proud of you. I know I am. As I write these few words of love, I could hear your momma saying, " Let the Lord use you". I love you Prez and keep on letting the Lord use you.

Thanks for a wonderful article! Renee and I appreciate you so much! Happy New Year!